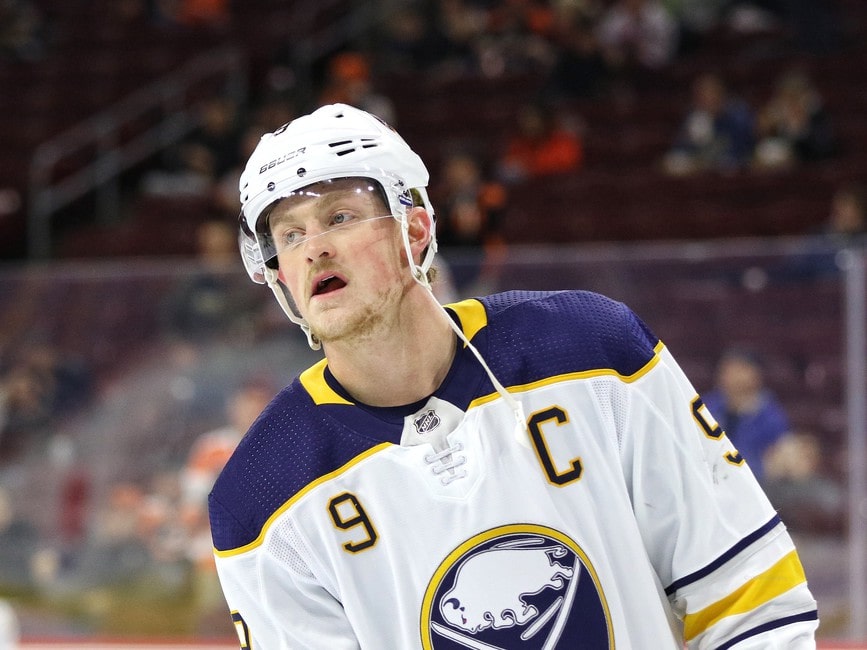 That collective groan you just heard emanating from the Vegas Golden Knights’ offices was a new round of Jack Eichel trade rumors and speculation floating about. Daily Faceoff insider Frank Seravalli identified Vegas as a “team to watch” in the slow-moving sweepstakes for the disgruntled Sabres star.

Of course, the Golden Knights’ reported interest in Eichel is hardly new. They were believed to have discussions with Buffalo general manager Kevyn Adams back in the summer, with Sabres management reportedly rejecting an offer of Reilly Smith, Peyton Krebs, Nicolas Hague and a first-round pick.

Given Vegas’ slow start amid a raft of injuries, it’s not surprising to see a fresh round of trade speculation. Even still, a panic trade hardly seems necessary. Coming off wins over the Colorado Avalanche and Dallas Stars, the Golden Knights have actually gotten considerable production – at a lower cost – from center Chandler Stephenson, even with usual linemates Max Pacioretty and Mark Stone out.

Back in the summer, two main hurdles stood in the way of a deal – the Sabres’ high asking price and the challenge of finding a workable return that maintains cap compliance. It’s unclear if anything has changed on either front, as Buffalo’s surprising start would presumably leave them disinclined to hastily lower their asking price and Vegas’ tight cap situation remains, even with added LTIR space.

Since the Golden Knights can’t control the whims of Buffalo’s wished-for return, the focus here is on potential assets going the other way and what makes sense for Vegas. Here, we examine some options:

The Golden Knights have been loathe to break up the second line of Smith, William Karlsson and Jonathan Marchessault, so losing Smith here would sting. That said, he’s the type of asset you’re probably willing to sacrifice for a three-time All-Star and franchise center who remains just 24. Significantly, he’s also on an expiring $5 million contract and may not be retained anyway.

While Smith would only offset half of Eichel’s $10 million cap hit, the Golden Knights could make up the deficiency through long-term injured reserve relief gained through the injuries of Max Pacioretty and Alex Tuch. It’s unknown when Eichel would be able to step back into the lineup post-trade, but Smith’s underwhelming early production (one goal, two assists in six games) renders him replaceable.

If we’re going to rehash trade speculation for one player, we might as well do the same for another. Pacioretty quashed trade speculation late last year, and remains with the club, but his $7 million cap hit for this season and next is probably the closest single contract match Vegas has for Eichel (Stone and Alex Pietrangelo aren’t going anywhere).

While Buffalo would surely have limited interest in the 32-year-old veteran (unless this hot start is for real, I suppose), Pacioretty would certainly help make the money work while providing them a flippable asset. Losing his 78 goals over the past three seasons would undoubtedly be a blow for Vegas, but Eichel still represents a clear upgrade at this stage.

The biggest issue with a trade centered around the two injured forwards would be subsequent assets. The Sabres would undoubtedly still want a futures-heavy supplemental return, while the Golden Knights might feel that losing Pacioretty would already represent a high initial cost.

That’s more like it from a Sabres’ standpoint. A top Vegas prospect, Krebs has now hit double digits in games played over his NHL career, albeit without a goal to show for it. That hasn’t taken any of the shine off the 20-year-old center, who has thrived at every other level. In fact, Krebs reportedly stood as something of a deal-breaker when the two teams last discussed the deal.

Even as the Golden Knights risk being haunted on the Pacioretty-for-Nick-Suzuki trade with Montreal, the opportunity cost involved in adding Eichel might make losing Krebs worthwhile. Yes, Eichel’s neck remains a concern for any acquiring team, but he’s only four years older than Krebs while significantly more established. Plus, as they say, banners fly forever.

Trading from a position of strength is always a sound strategy, which is why the inclusion of Hague in any Eichel deal makes so much sense. The 22-year-old blue liner with a booming shot would be an asset to any team, but currently ranks no higher than sixth on the Golden Knights’ back end depth chart. That means he’s averaged 17 minutes of ice time this season while probably deserving more.

That’s not to say that they’re prepared to just give away a young rearguard who hasn’t looked out of place amidst the likes of Pietrangelo, Shea Theodore and Alec Martinez. Hague could be a key component of the Vegas defense for years to come, alongside the newly extended Zach Whitecloud, but using him as a trade chip to land Eichel or another ‘win now’ asset also makes sense.

That we haven’t even addressed Eichel’s well-documented neck problems speaks to how risky and involved a trade with the Sabres superstar would be, apart from any loss of valuable assets. With that in mind, this speculation wouldn’t even be lingering if the Massachusetts native didn’t carry such vast potential, particularly on a team that already boasts Stanley Cup aspirations.

Will striking a deal be easy? No. Could it be worthwhile? Absolutely. Can Golden Knights GM Kelly McCrimmon and the Golden Knights make it work? We shall see.

I may be a Leafs fan at heart (I’ve witnessed their highs and lows first-hand as a Scotiabank Arena employee), but I’m also a veteran freelance sportswriter who loves a good story. And there’s been no better story in hockey over the past few years than the Vegas Golden Knights. I’m excited to be covering the NHL again on the Golden Knights’ beat.