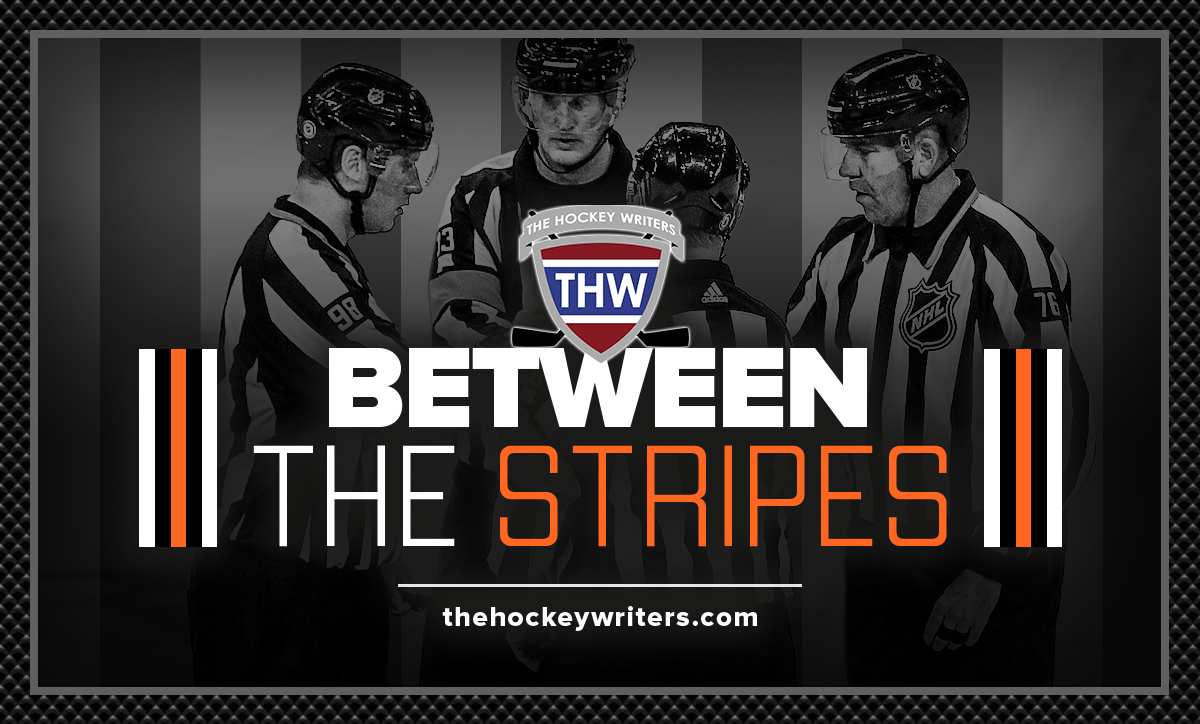 This edition of Between the Stripes examines the chaos that broke out during the Colorado Avalanche and St. Louis Blues game on October 28. The Avalanche won 4-3, handing the Blues their first loss of the season, while the referees handed out 66 minutes in penalties, including three 10-minute misconducts. However, the guys who wore the stripes for this game deserve accolades.

Referee Michael Markovic and Corey Syvret and linesman Kilian McNamara and Trent Knorr had their hands full. The Blues were swept in the first round of the playoffs by Avalanche just a few months earlier. It was a nasty series that included a season-ended hit on the Blues’ Justin Faulk and an eight-game suspension to the Avs’ Nazem Kadri.

Fast forward to Thursday’s game, 47 seconds into the first Faulk instigated a fight with Kadri. The spirited tussle seemed to relieve the hostility, as the rest of the period only had a few minor penalties, despite the tight-checking. The second period was more of the same, that is, until the last 30 seconds. Two players got tangled up in the blue paint, knocking the net off its moorings as the puck was shot in. The goal was immediately waved off, but a scrum ensued resulting in offsetting roughing penalties.

It’s what happened after the scrum that showed the importance of quick-acting, justified referring. Blues goaltender, Jordan Binnington, was momentarily involved in the scrum. As he skated away from the group, he shot the puck down the ice and then he swung his stick near the head of Kadri. Referee Markovic, likely knowing Binnington’s past erratic behaviour, followed the goalie and watched the whole scene play out directly in front of him, promptly handing out the 10-minute misconduct. It’s the first 10-minute misconduct to a Blues goalie since Rick Wamsley in 1987.

It wasn’t done yet. Kadri, perhaps slightly surprised by having a goalie stick swung near his face, didn’t immediately respond. Still, minutes later, he skated back down to Binnington and said something. Linesman Knorr kept Kadri away, but the aggressive forward received a 10-minute misconduct as well.

Kadri disputed the call after the game, “I don’t know why I got a 10-minute penalty there. I stayed out the scrum… We exchanged some words. I got a stick swung in my face. Then I end up with a 10-minute penalty. I’m not quite sure what it was for… I started skating towards him, but I’m about 50 feet away from the guy. I’m getting misconducts for just talking now. Not quite sure what that’s about.”

It’s unclear when the officials had seen enough from Kadri. Still, the video shows he was much closer than 50-feet when he was talking with Binnington. In the 226 page NHL Rule Book, there is a full page on Rule 23, infractions that can lead to 10-minute misconduct. So take your pick on this one: inciting an opponent into incurring a penalty, obscene language or gestures, persists in continuing an altercation, etc.

Officials Got it Right

Even Colorado’s head coach, Jared Bednar, sided with the refs, “it was the right call. You can’t continue to try and escalate an altercation. It’s no different from getting into a fight… Sometimes, they’ll let you get away with it, but that had dragged on long enough. You can’t go back and try to fire things back up.”

Even Binnington seemed to agree with how the officials ruled the game. A day after the incident, he said, “No, I’m not crazy… (the stick-swinging was) kind of the heat of the moment. … I might have taken it a bit too far. I don’t want to condone the stick-swinging. Having a guy sit in the box for 10 minutes isn’t being a good teammate. I definitely don’t want kids out there swinging their sticks.”

Incredibly, a game that appeared to become unhinged did not record a single penalty in the third period. Instead, the officials justified actions led to an exciting final period of hockey. The officials got it right.

Kevin Armstrong is an award-winning journalist with more than two decades of experience. He’s been rink side for World Juniors, Memorial Cups, Calder Cups and Stanley Cups. Like many Canadian kids, his earliest memories include hockey. Kevin has spent countless hours in arenas throughout the country watching all levels of the game.