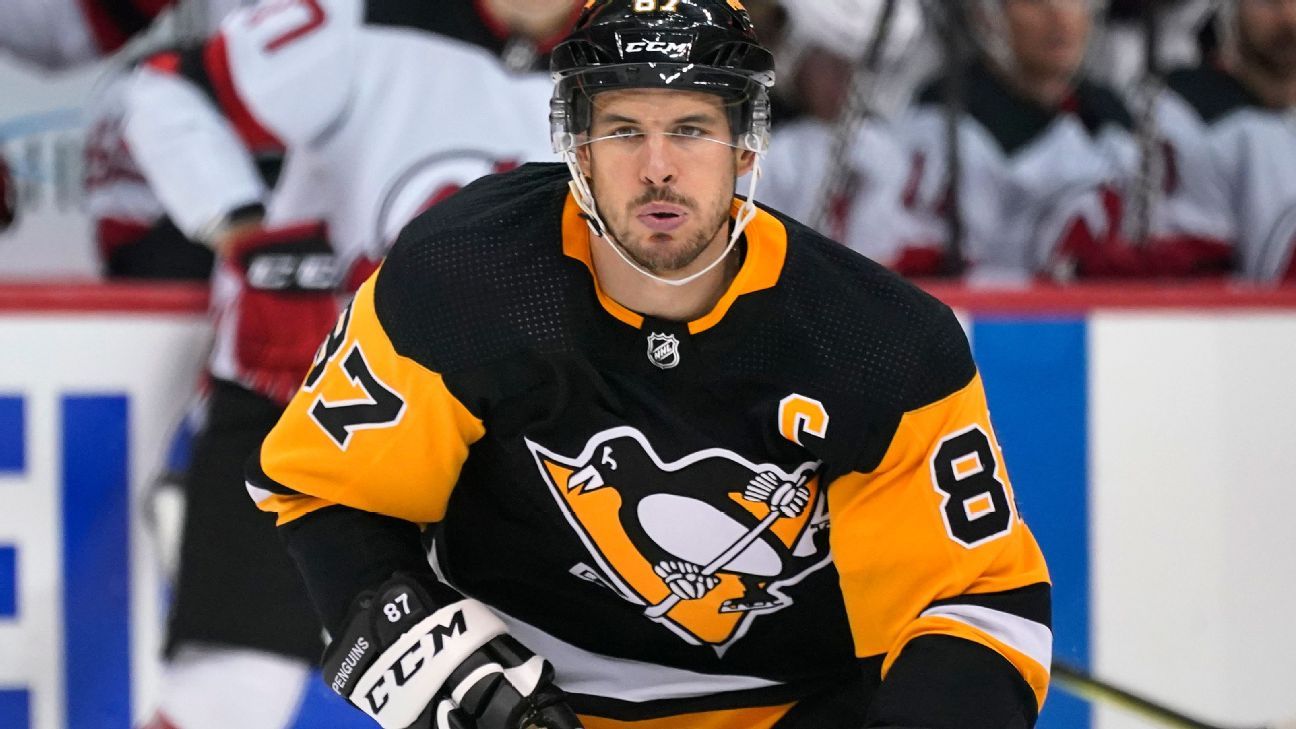 PITTSBURGH — In his season debut, Pittsburgh Penguins captain Sidney Crosby was called on a crucial third-period penalty in a tie contest that led to the game-winning goal in a 4-2 decision for the New Jersey Devils on Saturday night.

Crosby pulled down New Jersey winger Jesper Bratt in the slot with three minutes left, leading to the deciding penalty shot. Bratt skated to the right and beat Penguins goaltender Tristan Jarry with a backhander.

In the moments leading up to the penalty shot, Crosby, visibly upset with the call, yelled at the officials as he made his way to the bench.

“I thought he competed hard,” Penguins coach Mike Sullivan said. “It was his first game in five months. We all have high expectations for him. But it’s not easy to jump right into an NHL game.

“Our expectation is that it’s going to take a bit to get his timing. He’ll get better every game.”

The goal was Bratt’s first, and it came in New Jersey’s first road game, after the Devils opened with five straight in Newark, New Jersey.

“I don’t think we played well tonight. I thought we pushed in the third (period), but for me, we weren’t good enough,” Sullivan said. “We need to be better as a team in all areas.”

Crosby sat out the Penguins’ first seven games after undergoing wrist surgery Sept. 8. He and the organization were content to take a slow approach to his recovery, knowing that with a full 82-game season, there was plenty of time to get the captain back into a groove. Last Saturday, he took part in an optional morning skate with the team, and last Wednesday, he took another step closer, following up an individual on-ice workout with another optional team skate.

“He’s one of the best players to ever play,” Bratt said of Crosby. “You need to stay on top of that guy and try to take his time away a little bit. I think we did that in a pretty good way.”

Crosby returned to his familiar spot as Pittsburgh’s first-line center, alongside Evan Rodrigues and Jake Guentzel. Crosby, in his 17th NHL season, tied Hall of Fame owner Mario Lemieux for most played with the Penguins. He finished with 23 shifts in the loss, compiling 19:16 of ice time. He had two shots, two hits and finished an uncharacteristic minus-3.

“It’s nice to be back. I love being back out there with the guys, but ultimately, you want to win and play well, and that didn’t happen tonight,” Crosby said. “So, got some improving to do here.”

“It’s awesome to have them both back,” Penguins forward Danton Heinen, who scored in the loss, said of Crosby and Carter. “Obviously, they are unbelievable players.”

Andreas Johnsson scored twice for New Jersey, including an empty-net goal with 1:43 left. Jimmy Vesey, in his first season with the Devils, had a short-handed goal.

Jonathan Bernier, who also returned from injury, made 33 saves for the Devils. Bernier, in his first season in New Jersey, kept it tied at 2 in the third with two key power-play saves. He made a glove save on Guentzel and had a post-to-post one-timer stop on Kasperi Kapanen.

Heinen’s goal was his fourth with his new club, and Brock McGinn added his second for Pittsburgh. The Penguins have been outscored 13-3 in three straight losses after starting the season on a five-game points streak. Jarry made 36 saves.

“We got away from our game a bit,” Heinen said. “We weren’t winning the battles.”

Heinen opened the scoring for Pittsburgh at 12:23 of the first period. Defenseman Juuso Riikola, playing his first NHL game in nine months, helped set up the goal with a secondary assist. It was his first point since Jan. 12, 2020, at Arizona. Heinen has four goals in eight games for Pittsburgh after scoring seven times in 43 games last season in Anaheim.

Johnsson tied it with 37 seconds left in the period when his centering pass hit the skate of the Penguins’ Evan Rodrigues and went into the net.

Vesey gave the Devils a 2-1 lead with a short-handed goal late in the second. McGinn tied it 2 at 2:02 of the third period.