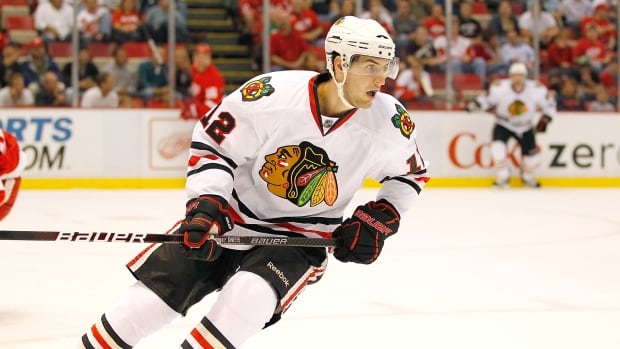 Beach, 31, alleged that he was sexually assaulted by former assistant Bradley Aldrich in 2010, and sued his former team for not doing anything about the situation.

While the case began with his identity remaining secretive, Beach eventually revealed to the public that he was the person behind the name John Doe 1 in the case.

On the latest episode of CBC Sports video series Bring It In, host Morgan Campbell is joined by panellists Meghan McPeak and Dave Zirin to discuss where the NHL and the NHLPA fell short of their responsibilities in the matter, as well as what standards of accountability former and current members of the coaching staff and front office need to be held to.

Host Morgan Campbell is joined by ‘Bring It In’ panellists Meghan McPeak and Dave Zirin, to discuss their reactions to the Chicago sexual abuse scandal, Kyle Beach coming forward publicly, the aftermath of the scandal that has seen the resignations of Joel Quenneville and Stan Bowman, and the unanswered questions about how the NHL and NHLPA plan to move forward with handling abuse allegations. 11:34

Zirin made note that the players’ association placed Beach’s case under the drug and abuse category, which led to it remaining confidential. Zirin believes the NHLPA should be held just as accountable.

“I don’t understand why it was in that category because we’re talking about apples and oranges in terms of what the proper responses should be,” he said.

“[Donald] Fehr is talking about correcting that, and not having that exist anymore, but why has it even existed at all? And where is the accountability in the union about this? Players who have been victimized, they need to feel like they have a space where they could come to.”

From McPeak’s standpoint, an alteration of the treatment towards accusers and the accused needs to be addressed and changed in all walks of life.

“I think it says a lot about the changes that need to happen in the culture of sports, period,” McPeak said.

“This is a human problem, because you have countless situations, whether it’s pro athletes, male or female, or just regular old citizens who are not pro athletes … the accuser is treated as if they are the one that did something wrong, when in actuality, it should be the person being accused that should be treated much more harshly than the person accusing them.”

Touching on Winnipeg Jets general manager Kevin Cheveldayoff, who was the assistant general manager in Chicago at the time, Campbell also made mention of the executive’s involvement in the mishandling of the Akim Aliu situation when he had a racially derogatory term used against him by a coach.

“If you’re the assistant general manager, you outrank the coach, you certainly outrank the video coach. And you can discipline the video coach,” he said regarding the situation with Beach and how the NHL found his involvement to be minor.

“Somehow, he’s still on the scene.”

Have your say: What should the Leafs do with William Nylander?
Seventh-rounder Wolf defies Draft logic
Answering the big NHL offseason questions: Trade candidates, free agents, draft rumblings
Boeser re-signs with Canucks on 3-year deal
‘I would have done the same thing:’ Bowness OK with being Jets’ second choice