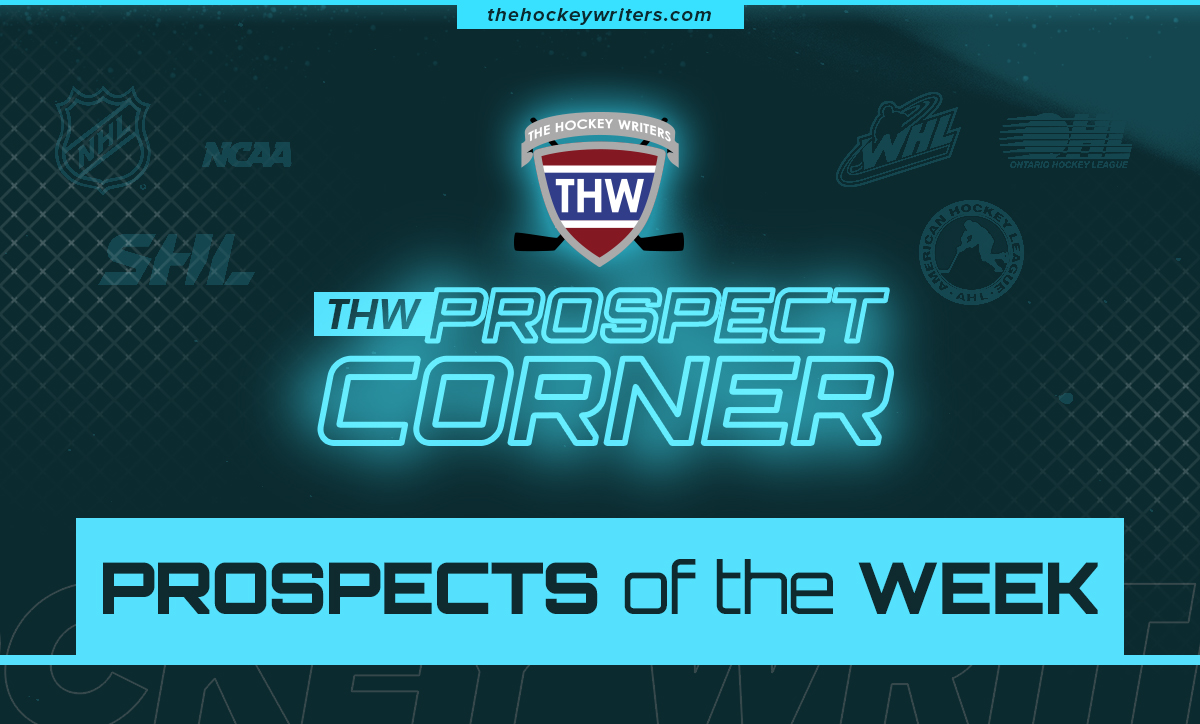 Welcome to the first edition of The Hockey Writers Prospect Corner’s Prospects of the Week. Matthew Zator, Greg Boysen, and Peter Baracchini each select one prospect that stood out during the week and highlight their performance both on-air and in print.

This past week saw a number of great performances from prospects across the hockey world. From the Ontario Hockey League (OHL) to the Western Hockey League (WHL), here are the three players that impressed us the most.

Not eligible until the 2023 NHL Draft, 16-year-old Calum Ritchie has impressed everyone in the OHL with his big frame and powerful shot en route to seven goals and 12 points in 10 games to start the 2021-22 season. Only four points behind the leader Tyler Tullio, he has certainly turned heads as a potential top-five pick in next year’s draft that features the likes of Conor Bedard and Matvei Mitchkov at the top of the mountain.

He can be a top-five player given his size, ability and awareness. He’s just got that instinct and drive that just matches anybody else on the ice.

Peter Baracchini in the latest episode of Prospect Corner

Ranking in the top echelon of OHL players in points at his age is beyond impressive. Right now, Ritchie is the only rookie in the top 20 in scoring and surprisingly only five back of the leader Ty Kartye, who is four years older than him.

Rory Kerins, who was recently named the OHL’s Player of the Week, is also Greg’s pick for player of the week here in the Prospect Corner. Drafted 174th overall by the Calgary Flames in 2020, he’s been one of the Soo Greyhounds’ best players so far in 2021-22. Coming off a 2020-21 season that saw him play only four games in the AHL with the Stockton Heat, he’s hit the ground running this season with seven goals and 16 points in 11 games. He has also been lights out in the faceoff dot, clocking in with a 61 percent efficiency rate. In fact, it was that faceoff ability that caught Greg’s eye the most.

One of the things that impressed me the most about his performance is that he also won 68 percent of his faceoffs. I think faceoffs is one of the most underrated stats in the game of hockey…you can’t score goals unless you have the puck and the best way to get the puck is to win faceoffs.

Greg Boysen on the latest episode of Prospect Corner

Last week, Kerins didn’t match his five-goal, ten-point outing during the week of Oct. 20, but he did add two more points to his total with a goal against the Guelph Storm and an assist against the Kitchener Rangers. His hard-working, two-way game seems to be perfect for the NHL and Darryl Sutter‘s system, so I wouldn’t be surprised to see him in the NHL sooner rather than later, especially if he can keep up his faceoff prowess.

Finally, we get to my prospect of the week in Vancouver Canucks defenceman Viktor Persson. After bouncing around the HockeyEttan, Swedish Hockey League (SHL), and J20 Nationell last season, he finally came over to North America to join the Kamloops Blazers. The smooth-skating, 6-foot-2 right-handed blueliner was drafted 56th overall by the Blazers in the 2020 Import Draft and is now playing big minutes for head coach Sean Clouston.

He has a well-rounded game…Great skater. He’s strong. He has some maturity…It’s going to be an adjustment, but he’s an intelligent hockey player and I’m sure he’ll adjust quickly.

Persson was drafted much later in the NHL by the Canucks. 191st in fact. Now ranked as one of the Canucks top defensive prospects, he could follow a similar trajectory as Kelowna Rockets’ alum Alex Edler. Already trusted by his head coach to play key minutes, he’s rewarded his new team with not only good two-way play but points as well. After only eight games, he has seven points, which includes his first Western Hockey League (WHL) goal. His plus/minus numbers have been solid too as he currently is running with a plus-8 rating.

In this week’s episode of The Hockey Writers’ Prospect Corner, Matthew, Peter, and Greg update the Calder Trophy race with Lucas Raymond, Moritz Seider, and Jonathan Dahlen entering the mix. They then go through the CHL and AHL roundup where they explore the games of the projected 2022 NHL Draft first-round picks and overall standouts from the 2021-22 season so far.

Stay tuned for the next THW Prospect Corner Prospects of the Week where we will have three new players to highlight. Until then, enjoy the games!