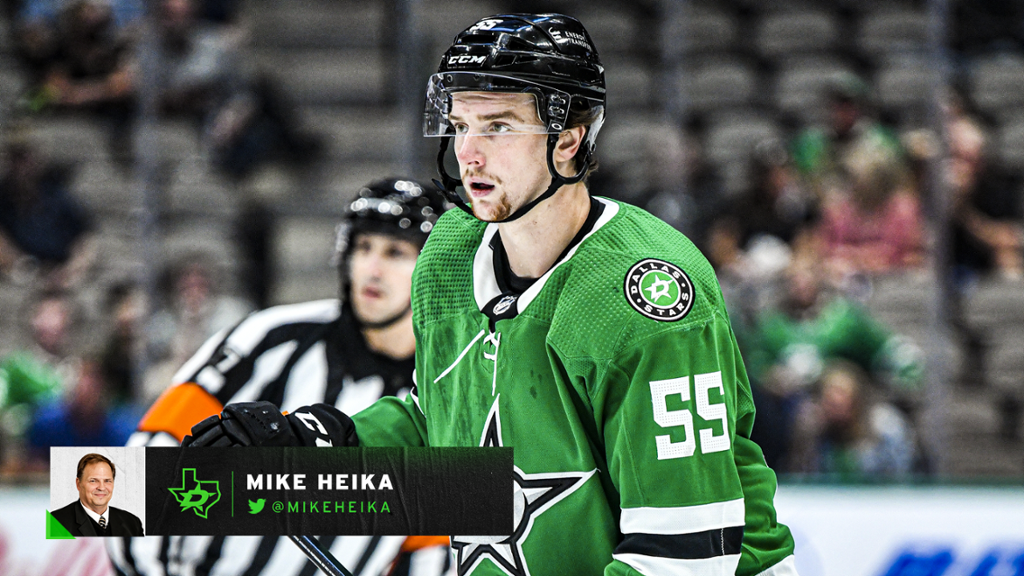 Thomas Harley‘s first NHL game was a bit of a strange experience.

The defenseman was still a couple of weeks shy of his 19th birthday in August 2020, but he was coming off a junior season in which he had 57 points in 59 games and had survived the training camp headed into the Edmonton playoff bubble, making the roster as a depth player who was expected to learn a lot in the process.

Because the Stars had already qualified for the playoffs, they played round-robin games against the Blues, Avalanche and Golden Knights. Harley drew the Colorado straw and played 10:58 in a 4-0 loss. He had no points, no shots on goal, one block and one hit. He said it was an experience that helped him a great deal.

“I was nervous,” Harley said with a chuckle as he remembered the “playoff” game. “You could probably tell on TV. I hadn’t played in four months, and it was just a whole lot of panic out there on the ice for me.”

Video: Harley on getting called up to big club

He remembered that he said to himself at the time: “If I get to play this next one, I’m going to be a little more ready for it.”

The “next one” could come Tuesday in Winnipeg. Harley, 20, was recalled from the AHL Monday and is traveling with the Stars on their three-game Canadian road trip. He practiced on Monday beside Jani Hakanpaa, and it would be easy to imagine that pair jumping into the lineup while the pair of Joel Hanley and Andrej Sekera would sit out.

Still, coach Rick Bowness said decisions would be made on Tuesday.

“He’s been playing very well down there,” Bowness said. “He’s going to come up, and at some point, he’ll play.”

Bowness did share there’s a reason Harley has been recalled. The team now has 13 forwards and eight defensemen, so he wasn’t needed to fill a roster spot. However, the skilled defenseman brings an element which could help the Stars create more goals. Dallas ranks 31st in scoring at 1.75 goals per game through seven games and would like to find a way to fix that. Harley had 25 points in 38 games last season.

“He gives us another offensive defenseman,” Bowness said. “It’s clear we’re struggling to put the puck in the net, and he gives us an element that’ll help us.”

Video: ‘We need to get this thing going’

Harley’s history is such that he has always been a player who can take risks and create possession in the offensive zone, whether that be by passing or carrying the puck. His biggest area of concern is that risk sometimes leads to too many scoring chances against. That’s normal for a 20-year-old defenseman.

In fact, it’s one of the reasons he was returned to the AHL after going through training camp. When Harley was sent down, he said he had some things that needed to be fixed.

“For me, it’s defensive consistency,” Harley said. “I think that’s something I’ve really improved on in the `A.’ These past six games, I’ve been really hard on pucks, ending plays on the wall, and gapping up really well, so I think that’s a big part of it.”

Earning the confidence of the coaching staff is a big deal for Harley and doing so can help his own confidence. Part of his success in the AHL has come from knowing when to take a risk, and he said he won’t be overly cautious in his call up.

“That’s the main thing I do,” Harley said. “That’s what I’ve done for years and years and years. Now, it’s just second nature. I see it and I go. There’s no hesitation, there’s no thinking about it. I’ve done it in the `A’ and it’s got me called up, so I’m going to keep trying to do it.”

The Stars are hoping that by putting Harley on the third pairing, they can have three defensemen who can “activate” and help create offense. John Klingberg and Miro Heiskanen already are doing that. But, making sure the philosophy goes throughout the lineup is key.

Bowness said he remembers Harley’s debut 15 months ago vividly and said while it could’ve been difficult at times, it helped create the timeline that has brought him here. Because the pandemic shut down the OHL, Harley played in the AHL last season and made significant strides.

“We probably played him against the wrong team because it was Colorado and they were flying,” Bowness said. “But what it did was in the long term it showed him the speed, the size, the strength of the guys in an NHL game – not an exhibition game – an NHL game. So it was a really good eye-opener for him.”

And, it helped fuel an inner drive, as well.

“Since that game, I want my next shot,” Harley said. “I want to prove I can play in this league for a long time.”

That shot could come as soon as Tuesday.

This story was not subject to the approval of the National Hockey League or Dallas Stars Hockey Club.

Mike Heika is a Senior Staff Writer for DallasStars.com and has covered the Stars since 1994. Follow him on Twitter @MikeHeika.