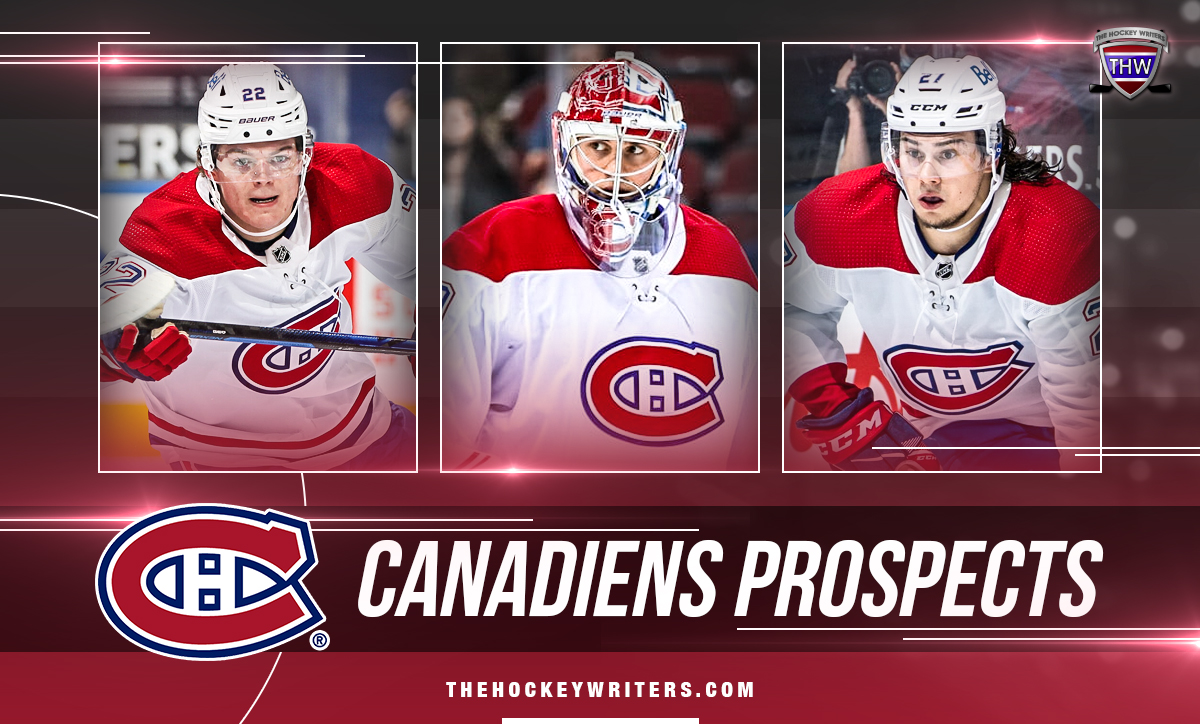 With the Montreal Canadiens’ season off to a very weak start, panic has begun to set in with the fan base. The team’s playoff hopes were already uncertain before the season — now, they look to be on life support. With that, fans have been looking to the future and wondering how the team’s multitude of prospects are faring in their development. This is not meant to be an extensive or complete list of the Canadiens’ prospect pool, only a means to highlight some of the key young players in the varied development leagues around the world.

We will begin in the North American professional ranks. The Canadiens have several hopefuls with the American Hockey League (AHL) Laval Rocket and with the new ECHL affiliate Trois-Rivières Lions.

Cole Caufield was recently sent down to Laval after a slow start in Montreal. The young winger had only one assist in 10 games played. That being said, he was one of the team leaders in shots on net and in controlled zone entries.

However, head coach Dominique Ducharme had cut back his role, so being sent to Laval to play in all situations is a good fit for his development at this time.

Ryan Poehling just couldn’t crack the Habs’ lineup out of camp this year, but started his season in the AHL with a bang, scoring two goals and five points in four games played. He suffered a concussion early in the season that saw him miss games, but returned and continued his strong two-way play. He is demonstrating that he can be a quality center. His call-up is inevitable; however, it should wait until the Canadiens can stabilize their free-fall and find consistency.

The 6-foot, 170-pound right winger had a slow start in Laval this season. Once his vaccination status was sorted out, he was able to focus on hockey. Since then, he has begun to display the speed and shot that made him a 2018 early second-round pick.

With the injuries starting to pile up in Montreal, it is quite possible he will get a chance with the Canadiens this season.

Seen as the future in goal for the Canadiens, Cayden Primeau will be given as many starts in Laval as possible this season. Carey Price is on the downward slide of his certain Hall of Fame career, so it will be important for the team to ensure a quality goaltender can take over once he chooses to leave.

Primeau has had a strong start of the 2021-22 season with a 3-2-0 record, a .910 save percentage (SV%) and a goals-against average (GAA) of 2.43 with one shutout. He has had some difficult moments early this season with his rebound control and ability to track pucks in traffic. However, another full season or two in the AHL is a must for his development. Playing behind a strong team in Laval while refining his game will build his confidence and skills to prepare him for the spotlight in Montreal.

From the Kontinental Hockey League (KHL) in Russia to Liiga in Finland, the Canadiens are well represented with prospects found spread across the continent.

The little-known, right-handed defenceman Dmitri Kostenko, drafted in the third round of the 2021 Draft, is currently playing in the VHL — the Russian version of the AHL — in the Spartak Moscow system. He has six points in 20 games played. The young, puck-moving defender has only been on the ice for one goal against so far this season, demonstrating that he is able to defend as well as create a transition game. Also, he has been added to the camp for the Russian Under 20 (U20) national team for the Four Nations Cup. This indicates that he is likely to play for Russia at the upcoming World Junior Championships (WJC).

The Canadiens’ 2021 second-round selection, Oliver Kapanen, has recently graduated from the Under-20 system to the main club, KalPa, in Finland`s top professional league, Liiga. As a U20, Kapanen had seven points in six games played. With KalPa, he has one goal and one assist in 10 games played, which isn’t that bad considering the low amount of ice time provided to young call ups in that league.

Also, he has been invited to Finland`s camp for the Four Nations tournament. This also points to him joining the Finnish WJC squad, where is likely to play in a top-six offensive role.

The Canadiens have a few of their top prospects playing in all three of the Canadian Hockey League (CHL) affiliate leagues this season. This group is also highlighted by several prospects who are in the running to represent their countries at the 2022 World Junior Championships to be held in Alberta, Canada.

The Canadiens’ top defensive prospect Kaiden Guhle is the captain of the Prince Albert Raiders. So far this season, on a weak team, he has eight points in seven games played. He has continued to play his very mobile and physical style while in Prince Albert. Barring a trade to a stronger Western Hockey League (WHL) team, Guhle should have a short playoff with Prince Albert, making him available to be called back to Laval. Last season, in his three games played, he showed he was ready to play at the AHL level, but as he is not 20 years of age, he had to return to the WHL.

Also, Guhle is another Canadiens prospect that is expected to play in this upcoming WJC. As a returning member for Team Canada, he is likely to play a major role on the blue line as well as in the leadership of the team as he is an odds-on favorite to be captain for Team Canada.

Xavier Simoneau is leading the Charlottetown Islanders in points with 20 points in 11 games played. Aided by his fellow Canadiens prospect, defenceman William Trudeau, the Islanders lead their division and are second overall in the Quebec Major Junior Hockey League (QMJHL).

After an impressive showing at the Canadiens Rookie camp, 2021 fifth-round pick Joshua Roy has kept impressing. He leads the 8-3-0 Sherbrooke Phoenix with 19 points in 11 games played. He has been relied upon in all situations, he has taken a lunch pail to the rink and is putting in the work to prove he has deserved that role.

Halifax native and Canadiens’ 2021 second-round selection Riley Kidney has started the season with a bang, with seven goals and 17 points in 13 games played. Kidney has shown his offensive flair with his slick passing and accurate shot. His 5-foot-11 frame has added about 10 pounds this offseason, growing to 175 pounds — this added muscle has helped his already strong skating and speed, as well as his ability to battle along the boards.

He will be a long-term project, but one that has shown a knack on the offensive side of the puck, a skill that cannot be taught.

Jan Mysac is another prospect that has had a productive start to his season, going a point per game with four goals, nine points in nine games played for the Ontario Hockey League (OHL) Hamilton Bulldogs. Mysak is also expected to return to the WJC and reprise his role as top-line center and team captain for the Czech Republic squad.

As an undrafted 20-year-old, Arbor Xhekaj was a relative unknown when he received an Amateur Tryout invitation to the Canadiens rookie camp. However, he quickly made himself noticed with his mobility and physical play, earning an invitation to the team’s main camp and eventually, earning an entry-level contract. Since his return to the OHL Kitchener Rangers, the 6-foot-4, 214-pound, left-handed defender, has shown progression in his physical two-way game, leading his team in hits and penalty minutes while scoring one goal and six points in eight games played. Yet he will need to learn restraint as he is currently suspended five games for a slew foot.

The Canadiens’ 2020 fourth-round selection Sean Ferrel has been impressing fans with his offense since his selection. Last season, he led the United States Hockey League (USHL) Chicago Steel to a championship and broke their point record with an impressive 101 points in 53 games played. This season, he joined the Harvard University Hockey program. In only two games played, Farrell has three goals and seven points, leading Harvard in both categories.

Jordan Harris has entered his senior year at Northeastern University, he is also the captain for a team that is looking to win it’s fourth straight Beanpot Tournament and the school’s first ever National Championship. Canadiens fans are hoping that the young, puck-moving defenceman, who now has one goal and five points in eight games played, placing him third on the team in points, will sign before reaching unrestricted free agency in August 2022.

The Canadiens selected Jayden Struble in the second round of the 2019 NHL Draft after he impressed them at the NHL Combine. He is a highly mobile puck mover with an explosive first step that brings a physical edge, much like current Canadiens defenceman Alexander Romanov.

Now in his third season at Northeastern University, Struble is finally healthy and the trust of his coaching staff, providing him with the opportunity for his game to blossom. He has made some strides in his defensive game, but not at the expense of the offence he can provide — he has two goals, four points in eight games played so far this season.

Czech Republic native Jakob Dobes moved to the USA as a teenager and began turning heads. This season is no different. In only four games with Ohio State University, the Canadiens’ 2020 fifth-round pick has a 4-1-0 record thanks in large part to his 0.86 GAA and a .964 SV%. His play earned him Hockey Commissioners Association Men’s Rookie of the Month for October.

The Canadiens’ prospect pool has many good young players across all positions. With the exception of Caufield, none are considered capable of becoming a top-line player. However, many have legitimate chances of developing into an NHL player. The Habs will need several to reach their potential. While it may be painful for fans to watch their beloved Canadiens struggle, the upside is they can look to the success their young draft picks are having in leagues everywhere and feel hopeful about the future.