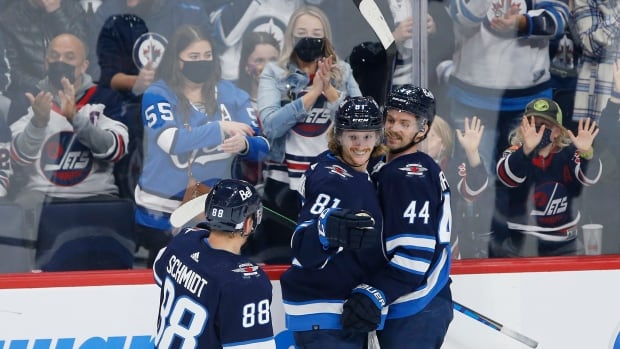 The Winnipeg Jets are off to their best start of the team’s modern era.

Forwards Kyle Connor and Nikolaj Ehlers each scored a goal and an assist for the Jets in a 5-1 victory over Chicago in front of 13,756 at the Canada Life Centre on Friday.

Winnipeg improved to 6-2-2 after a fourth straight win at home.

“You want to be as big of a part of the team [as possible],” Copp said. “I think we’ve had a great group here for a long time, it feels like. We’ve added some pieces this year that feel like we round out the group pretty good, so we take a lot of ownership in how we play and how we perform.

Winnipeg’s starter Eric Comrie stopped 16 of 17 shots in the win, with only Chicago’s short-handed goal in the third period spoiling his shutout bid.

“It would be cool, it would be my first NHL shutout, something I’m looking forward to,” Comrie said. “I’d be crazy to say it’s not going through my mind. Of course, it’s going through your mind, but I’m just trying to focus on the moment and play, focus on the process.

“It was a good play by them. I was trying to steal the post. It was bang-bang off the backboard right to the guy. Kind of a weird play on our power play, so it’s unfortunate but I mean, just go back to the process of things and let this one take care of itself.”

Winnipeg beats Chicago 5-1 for their fourth straight victory at home, Kyle Connor has recorded 16 points in his first 10 games of the season. 0:53

Chicago forward MacKenzie Entwistle scored the short-hander in the first minute of the third period.

“It was nice to finally get one in,” Entwistle said. “I believe it was on the [penalty] kill, so our kill has been great all year.

“[But] there’s no real excuse. We’re coming in here against a big, solid team and I think we’ve got to be ready to start the game. We get out to a 2-0 deficit early. It’s tough to come back against a team like that, so it’s frustrating.

“We’ve got to start on time and there’s no real excuse.”

Goalie Marc-Andre Fleury made 28 saves in a losing cause for Chicago (1-9-2).

“It’s been hard on the players, the stretch we’ve been going through,” Chicago coach Jeremy Colliton said. “We’ve had some good performances we haven’t gotten rewarded for, and it weighs on you. There’s no excuse.

“We can’t give ourselves a chance to win when you have the type of performance that we did tonight. But all we can do is move onto the next one and come out with energy and compete level and do a better job.”

Chicago is at home Sunday to the Nashville Predators.

Winnipeg was minus top goaltender Connor Hellebuyck, who was ill but did not test positive for COVID-19, the Jets said Friday. Mikhail Berdin was called up from the AHL’s Manitoba Moose to back up Comrie.

Winnipeg won the second of a seven-game homestand for Winnipeg. The Jets play their second home game in as many days Saturday with the New York Islanders in town.