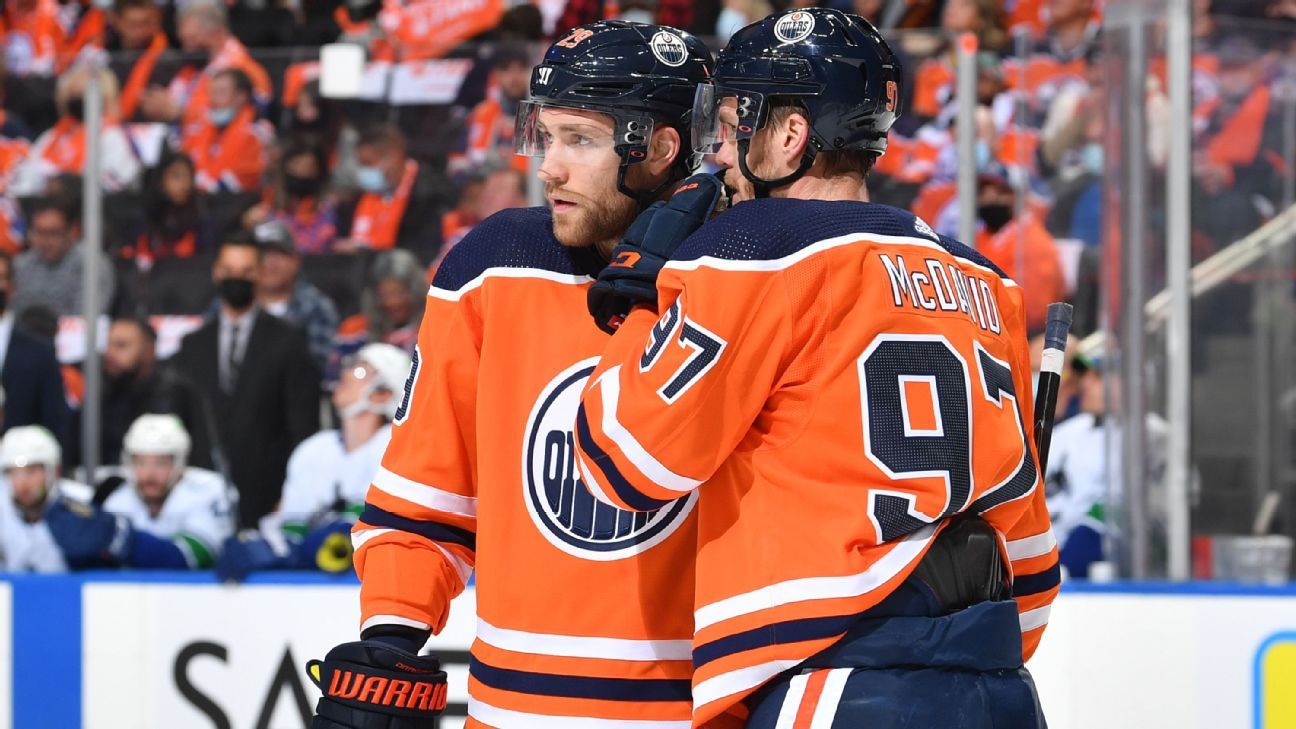 As the NHL Awards Watch for the 2021-22 season begins, there’s only one award that has a clear frontrunner.

No, not Connor McDavid for the MVP.

Bill Armstrong for general manager of the year.

The general manager of the year should be the one that best accomplishes the task at hand. In most cases, that means challenging for the Stanley Cup. In the Arizona Coyotes‘ case, that means ensuring the best possible odds of landing a top pick in the 2022 NHL draft by performing a gut renovation of their roster, while creating the least competitive group possible above the NHL salary floor.

To that end, Bill Armstrong appears to have done the best possible job imaginable.

The Coyotes are 0-9-1 with a goal differential of minus-29. There will be no goaltender stealing games down the stretch to spoil the tank, as their goaltenders have posted a .874 combined save percentage, including injured veteran Carter Hutton, who has posted a .741 save percentage.

We’re in awe of the Coyotes. They’re the perfectly crafted organism meant to dwell in the NHL’s basement. And that’s frankly award-worthy.

Here’s the NHL Awards Watch for November. This is informed speculation, taken from conversations around hockey and with voters, regarding the current contenders for each award. We asked a dozen of them to give us their current favorites for this month’s edition.

All stats from Hockey-Reference.com, Natural Stat Trick and Evolving Hockey.

Of the NHL Awards voters we surveyed, McDavid was on top of around 60% of the early Hart Trophy ballots. He has seven goals and 12 assists in nine games, with a game-winning goal. He has 4.3 goals scored above average thus far this season, and remains the NHL’s preeminent human highlight reel.

What he wasn’t, through nine games, was the NHL’s leading points scorer. That honor went to his teammate Draisaitl, with 20 points in that span. He was the second-leading vote-getter on our survey, and had the game-winning goal in three of the Oilers’ eight wins. He has 5.5 goals above average and has already added a win above replacement.

Ovechkin was the next leading vote-getter, and it’s been an absolutely epic start for the three-time MVP with nine goals in nine games, bringing his total to 739 for his career. (Watch out, Gretzky!) In every game in which the Capitals have earned a point in the standings, Ovechkin has earned a point. He hasn’t won the Hart since 2012-13. If the Edmonton boys split the vote, could the Russian Machine power through to MVP honors?

Ekblad and Fox were the only players named on our voters’ Norris ballots, with Ekblad getting one more vote than the reigning Norris winner. The Panthers defenseman had nine points in nine games to start the season, skating to a plus-10. His partnership with MacKenzie Weegar has been one of the best in the NHL: They’re averaging 4.02 goals per 60 minutes and 1.35 goals against per 60 minutes as a duo. Ekblad has been solid defensively, too, with 55.8% zone entry denial.

Ekblad has never been in the top 10 for the Norris Trophy but was seemingly on track for contention last season when he had 22 points in 35 games. But then a broken leg felled him and ended those award hopes. The Norris Trophy loves a first-time winner almost as much as it loved nominating Victor Hedman. Ekblad is squarely in the spotlight early on. (And one could argue his partner Weegar should be, too.)

Fox has followed up his Norris-winning season with a performance that might be even better. He has 11 points in 10 games, he’s running the point on the top power-play unit and plays on their second penalty-kill unit. An all-around force, and worth every penny of the $66.5 million extension that the Rangers inked him to on Nov. 1.

As for the third candidate, Josi is back doing Josi things for the Nashville Predators. The 2020-21 Norris winner has 11 points in his first 10 games of the season, and is a puck-possession force so far with partner Dante Fabbro — a pairing that has a 61.3 expected goals percentage so far at 5-on-5.

Among the other candidates: The surprising Kevin Shattenkirk, with 11 points in 11 games for the Anaheim Ducks; the unsurprising Hedman, with nine points in nine games as the Tampa Bay Lightning defenseman seeks his sixth straight nomination; Charlie McAvoy of the Boston Bruins and Thomas Chabot of the Ottawa Senators, two solid defenders who are going to need more points to win this race; Dougie Hamilton, who is everything the New Jersey Devils hoped he’d be as a free-agent prize; and Tony DeAngelo, who replaced him in Carolina and has 10 points in nine games. (Although one wonders, given his history, if he’d ever garner enough voter support.)

First, we should note who isn’t in the Calder race at the moment: Cole Caufield, the heavy favorite for the award entering the season after his outstanding run with the Montreal Canadiens in the 2021 playoffs. The 20-year-old was demoted to the AHL after amassing just one assist in 10 games, skating to a minus-3.

His absence has opened the door to a pair of Detroit Red Wings rookies. Seider, the 20-year-old from Germany, has the early advantage with eight points in 10 games while skating 22:26 per contest.

Moritz Seider, the NHL’s rookie of the month for October, is having a pretty good start to his career. #LGRW pic.twitter.com/Xi9GpaSDB2

His defensive game has been a little more refined than his offensive one, but given the competition he has faced it’s a heck of an opening month. Which, not coincidentally, ended with him being named rookie of the month for October.

Through Wednesday night’s games, Raymond led all rookies with nine points in 10 games, just ahead of Byram and Seider (both with 8). The 19-year-old Swede has an interesting story, in that his play at rookie camp and in the preseason all but forced the Red Wings into putting him on the roster instead of percolating in the minor leagues. He has rewarded their trust, and helped create one of the best lines in the NHL during the first month of the season with Dylan Larkin and Tyler Bertuzzi (67.1 expected goals percentage).

Byram has split time with former Calder winner Cale Makar and veteran Erik Johnson this season, and has outpaced both of them. He’s right there with Seider in leading rookie defensemen in scoring, although he has been a bit more protected with 61.5% of his shifts starting in the offensive zone. (Seider is at 54.6%.) A solid start for the fourth-overall pick in 2019.

Among the other candidates are Spencer Knight of the Florida Panthers, whom one expects will crack the top three by next month; Jonathan Dahlen of the San Jose Sharks; elder statesman Michael Bunting of the Toronto Maple Leafs; Cole Sillinger of the Columbus Blue Jackets; Dawson Mercer of the New Jersey Devils; and Trevor Zegras and Jamie Drysdale of the Anaheim Ducks.

Note: The NHL’s general managers vote for this award

The voters put over Andersen, the former Toronto Maple Leafs goalie who landed in Raleigh during the offseason’s keeper carousel. He’s off to an 8-0-0 start with a .949 save percentage and a shutout, powering the Hurricanes to a league-best 1.67 goals-against average. How much the general managers would credit Andersen vs. credit the system in front of him remains to be seen, but he has been fantastic.

Markstrom faces the same questions about the system vs. the goalie in Calgary. Coach Darryl Sutter has the Flames playing some outstanding hockey. The coach’s calling card has always been a stout defensive system, and through nine games, Calgary was third in the NHL with a 2.00 goals-against average. Take nothing away from Markstrom, who is having a great bounce-back campaign in the second season of his sizable contract (.947 save percentage in seven games), but the goalie doesn’t always get the credit on a Sutter team. Please recall Jonathan Quick getting two Vezina nominations, but never winning, for the Los Angeles Kings.

Shesterkin had the second-most support among the writers we surveyed, and could have a case to the be the award’s leader at this point. He’s 5-1-2 on the season with a .943 save percentage. He’s leading the NHL with 8.4 goals saved above average, right ahead of Andersen (7.8). His durability remains one of the only nagging questions about whether he can remain in the top three.

Among the other candidates are a resurgent Sergei Bobrovsky in Florida; Elvis Merzlikins of the Blue Jackets; Mikko Koskinen of the Oilers; Ilya Sorokin of the New York Islanders; and Jordan Binnington of the St. Louis Blues, who appears to be gunning for that Team Canada gig with a 5-1-1 start.

A couple of the usual suspects here. Barkov won his first Selke last season and is off to another strong start, winning 52% of his faceoffs and leading the NHL in takeaways (14). But while Barkov earned the most support on our voters’ early ballots, the Panthers have the same expected goals for (2.3) and against (2.3) when he’s on the ice. But it’s early.

Bergeron is seeking his NHL-record fifth Selke Trophy and his 11th straight nomination, which is a record for any NHL Award. He’s winning 60.4% of his faceoffs, crushing it in puck possession on the Bruins’ top line (58.64 Corsi for percentage) and helping Boston to a 1.34 expected goals against per 60 minutes when he’s on the ice.

Pavelski continues to be an underappreciated defensive ace for the Stars. The 37-year-old was seventh for the Selke last season, and Dallas is averaging 1.59 expected goals against per 60 with him out there. Pavelski’s also winning 57.7% of his faceoffs, too.

Among the other candidates getting votes: Anthony Cirelli of the Tampa Bay Lightning; Anze Kopitar of the Los Angeles Kings; and Sean Couturier of the Philadelphia Flyers.

This is the part where I mention that the Lady Byng Trophy for gentlemanly play should be voted on by the league’s on-ice officials or by the National Hockey League Players’ Association.

It’s way too early to properly predict a favorite for this heralded award, but we will mention that (a) Jaccob Slavin winning the trophy last season cleared the way for defensemen to win it every year and (b) Ekblad had no penalty minutes through his first nine games.

Note: The NHL Broadcasters’ Association votes on this award.

Brind’Amour is the early leader. The Carolina coach was named on the majority of our writers’ ballots, as they credit him for the team’s undefeated start (9-0-0) and tremendous balance between offense (4.11 goals per game) and defense (1.67 goals against per game). Sutter was named on the second-most ballots, as he has been able to establish his defensive system while also getting the Flames to score beyond expectation. Granato earned the third-most votes for the Sabres’ defiant start, giving a team that was more notable for the player who wasn’t there (Jack Eichel) than any of the players on their roster. But as we’ve seen in the past with this team, it might be fleeting success.

Among the other candidates are Peter Laviolette of the Capitals; Dave Tippett of the Oilers; Gerard Gallant of the Rangers; Craig Berube of the Blues; and Dean Evason of the Minnesota Wild.

Throwing this race into a bit of chaos was the resignation of Joel Quenneville of the then-undefeated Florida Panthers, following a meeting with commissioner Gary Bettman about his role in dealing with sexual assault allegations by Kyle Beach against former Chicago Blackhawks video coach Brad Aldrich in 2010. Interim coach Andrew Brunette is now behind the bench, and it’ll be interesting see how his candidacy takes shape if the Panthers keep rolling.