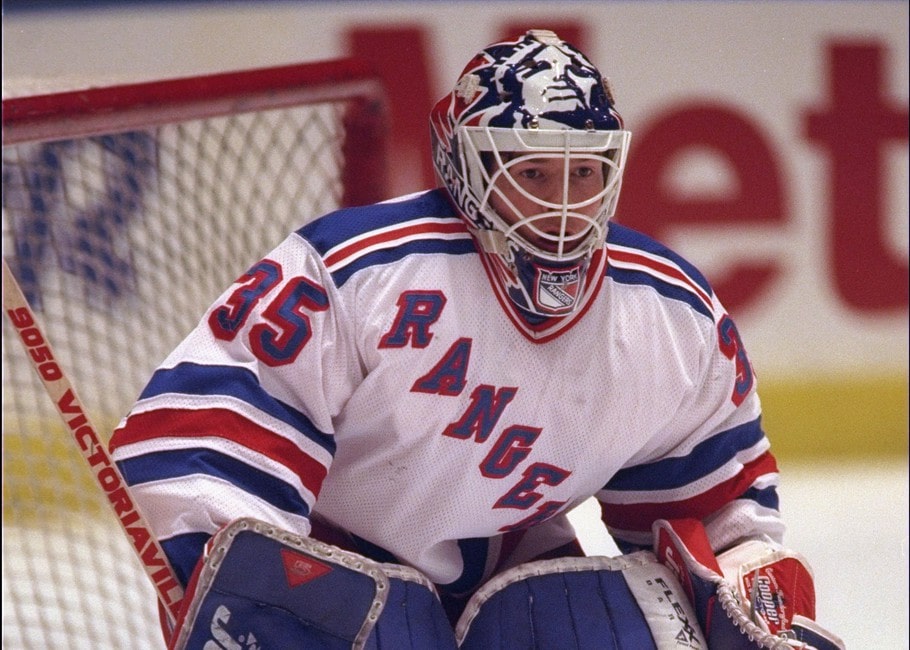 This date in National Hockey League history has seen a little bit of everything. There were multiple goals scored in short order, memorable moments in Detroit, Vancouver, and Los Angeles, a big three-team trade, and a very special hat trick. So, let’s hop aboard the THW time machine and relive all the best moments from Nov. 5

Jean Beliveau scored all four goals for the Montreal Canadiens on Nov. 5, 1955, in their 4-2 victory over the Boston Bruins. Three of those four goals came on the power play in a span of 44 seconds. This was back when a player served his full two-minute penalty regardless of how many goals were scored, just like a five-minute major nowadays. Bert Olmstead assisted on all three of Beliveau’s power-play tallies for the second-fastest three assists recorded in league history.

Scoring two goals in short order was the theme of the night back on Nov. 5, 1983. The Chicago Blackhawks lost 10-5 at the Minnesota North Stars, but they made NHL history in the second period. Ken Yaremchuk scored 12 seconds into the frame, and Darryl Sutter scored nine seconds later to break the record for the fastest two goals scored from the start of a period by the same team.

Meanwhile, on that same night, the New York Rangers and Quebec Nordiques set the NHL record for the fastest two goals scored from the start of a period by two teams. Andre Savard lit the lamp for the Nordiques eight seconds into the third period, but the Rangers’ Pierre Larouche answered just six seconds later. The two teams skated to a 4-4 tie.

On Nov. 5, 1970, goaltenders Glenn Hall and Ernie Wakely combined for the St. Louis Blues’ 2-0 shutout at the Boston Bruins. This was the Blues first-ever win at the Boston Garden since joining the league in 1967. It also snapped the Bruins’ 29-game unbeaten streak on home ice in which they went 24-0-5.

Michel Larocque stopped all 32 shots he faced to pick up his 14th career shutout on Nov. 5, 1979, in the Canadiens 2-0 win over the Washington Capitals. They improved their all-time record versus the Capitals to 34-0-2 since they entered the NHL at the start of the 1974-75 season.

The Minnesota Wild beat the Calgary Flames 3-2 in overtime on Nov. 5, 2000, to earn their first road in franchise history. Antti Laaksonen scored in overtime after Wes Walz had two goals during regulation. This was also the 250th victory in Jacques Lemaire’s coaching career.

That night, Doug Weight tied a career-high with four assists in the Edmonton Oilers’ 4-2 victory at the Columbus Blue Jackets. This was the 800th victory in franchise history since the Oilers merged into the NHL in 1979.

The Buffalo Sabres beat the Rangers 4-3 in overtime on Nov. 5, 2006, to set a new NHL record with their eighth straight road win to start the season. Daniel Briere’s second goal of the night broke the record with a minute left in overtime.

Defenseman Phil Housley picked up his 200th career assist on Nov. 5, 1986, as the Sabres won 8-3 over the visiting Bruins. He finished his career with 894 assists, the fifth-most by a blueliner in league history.

Mats Naslund picked up three assists to record his 500th NHL career point, all with the Canadiens on Nov. 5, 1988. Guy Carbonneau added two goals and two assists in Montreal’s 7-2 victory over the visiting Winnipeg Jets.

John MacLean became the first player to score 700 points as a member of the New Jersey Devils on Nov. 5, 1997. The milestone came on an empty-net goal in a 4-2 win at the Florida Panthers.

On that same night, Wendel Clark became the eighth player in franchise history to score 250 goals as a member of the Maple Leafs. He accomplished this feat in a 4-3 win versus the Calgary Flames.

Current Seattle Kraken general manager Ron Francis picked up an assist on Nov. 5, 1999, to become the sixth NHL player to score 1,500 career points. However, his Carolina Hurricanes fell to the Red Wings 3-2.

On Nov. 5, 2002, John LeClair became the seventh player in team history to score 300 goals as a member of the Flyers. His big goal came in overtime to secure a 2-1 win at the Hurricanes.

One year later, Scott Stevens had two assists to become just the 10th defenseman in NHL history to score 900 points. Jamie Langenbrunner scored in the final minute over overtime to give the Devils a 3-2 victory over the visiting San Jose Sharks.

Carl Liscombe set a new NHL record on Nov. 5, 1942, by racking up seven points in the Detroit Red Wings’ 12-5 blowout of the Rangers. He scored three goals and added four assists in the winning effort. The Red Wings also set a new franchise record by scoring six power-play goals.

Gordie Howe scored a goal and added an assist on Nov. 5, 1959, in a Red Wings’ 8-3 loss to the Bruins. This gave Howe 1,000 career points in the regular and playoffs combined. He hit this milestone in 947 total games.

On Nov. 5, 1986, John Ogrodnick became the fifth player in franchise history to score 250 goals. He also added three assists for a four-point evening in the Red Wings’ 5-4 overtime win over the visiting Rangers.

Andre Boudrias became the first player in Vancouver Canucks history to score 100 goals on Nov. 4, 1974, when he netted the game-winner in a 2-1 victory over the Rangers. He scored 121 of his 151 career NHL goals with the Canucks.

Stan Smyl appeared in his 684th contest on Nov. 5, 1987, passing Harold Snepsts as Canucks’ all-time leader in regular-season games played. Greg Adams scored with 11 seconds left in the third period for a 4-3 road win at the Flyers.

On Nov. 5, 1967, rookie Bill “Cowboy” Flett scored the first hat trick in Los Angeles Kings’ 6-4 road win at the Red Wings. He scored nine hat tricks during his 11 seasons in the NHL, three of which came with the Kings.

A decade later, on Nov. 5, 1977, Mike Murphy became the sixth player in team history to score 100 goals with the Kings. He helped in a 3-1 victory over the Rangers. He scored 194 goals with Los Angeles, which are still good for 10th-most in franchise history.

Hall of Famer Marcel Dionne became the second player in team history to score 250 goals on Nov. 5, 1980, when his 20th career hat trick led the team to a 5-3 win over the Capitals. He held the all-time lead in Kings’ goals, with 550, until Luc Robitaille passed him in 2006.

Center Syl Apps and goaltender Turk Broda both made their NHL debuts on Nov. 5, 1936, in a 3-1 loss to the Red Wings. Both players led Hall of Fame careers and were teammates on three separate Stanley Cup championship teams.

The Bruins signed free-agent defenseman Mike Milbury on Nov. 5, 1974, out of Colgate University. He made his NHL debut in 1976 and played in 754 games for the Bruins. He eventually spent two seasons as their head coach before moving on to the New York Islanders organization.

Goaltender Mike Richter played in his final NHL game on Nov. 5, 2002, and made 39 saves to lead the Rangers to a 5-2 victory over the Oilers. During the game, he was accidentally kneed in the head by his former teammate, Todd Marchant. Eventually, post-concussion symptoms forced him to announce his retirement the following September. At the time of his retirement, he was the franchise’s all-time leader with 301 wins and 666 games played before being passed up by Henrik Lundqvist. On Feb. 4, 2016, Richter’s No. 35 was just the third number the Rangers ever retired.

On Nov. 5, 2011, the Flyers beat the Blue Jackets 9-2 with eight different players scoring goals. This was the first time this feat was accomplished since an 8-5 victory over the Maple Leafs on Oct. 23, 1983.

The Colorado Avalanche, Ottawa Senators, and Nashville Predators completed a huge three-team trade on this date in 2017. This deal saw Matt Duchene go to the Senators and Kyle Turris moving on to the Predators. The Avalanche were the big winners in this deal as received defenseman Samuel Girard, Vladislav Kamenev, and three draft picks. Including the one that turned into Byram Bowen.

Later that night, Mathew Barzal became the first Islanders’ rookie to record five assists in a game, in a 6-4 win over the Avalanche. This was the first three five-point games Barzal had on his way to the Calder Trophy for being the top rookie of the 2017-18 season.

Veteran Brian Boyle scored the first hat trick of his career on Nov. 5, 2018, as the Devils defeated the Penguins 5-1. His natural hat rick came on Hockey Fights Cancer night just over a year after being diagnosed with chronic myeloid leukemia.