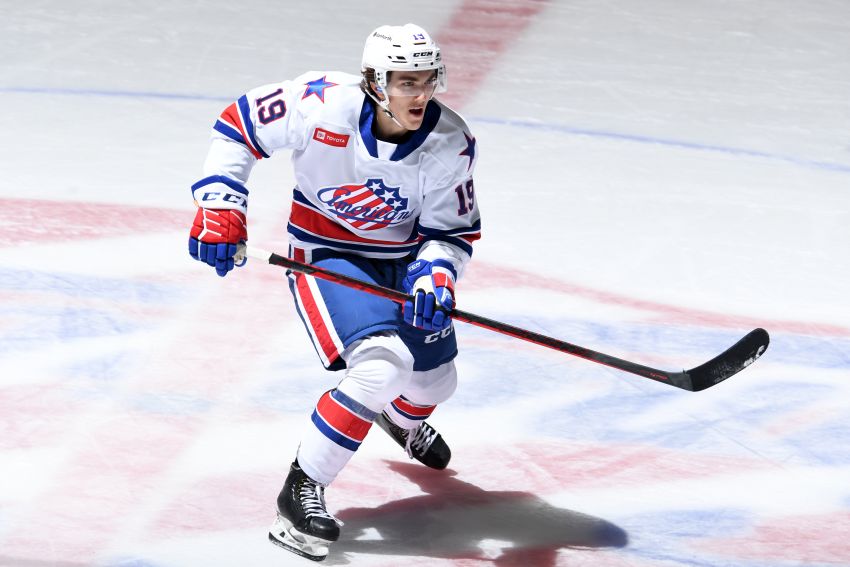 ROCHESTER – Peyton Krebs woke up in his Ottawa hotel room Thursday morning after having what he called a “weird dream” and checked his phone. Immediately, his heart started racing.

Krebs, who was expecting to play for the Vegas Golden Knights that night, had a few missed calls from general manager Kelly McCrimmon.

Around 6 or 7 a.m., Krebs, 20, learned the Buffalo Sabres acquired him in the blockbuster trade that sent star center Jack Eichel to Vegas.

The Sabres assigned Krebs to the AHL, so he hopped in a car and arrived in Rochester about 5 p.m Thursday. The prospect made his Americans debut in Friday’s 4-1 loss to the Toronto Marlies at Blue Cross Arena.

“I’ve never gone through this experience before, so it kind of feels like the first day of training camp,” Krebs said on a Zoom call prior to the game.

Krebs looked comfortable from the get-go, generating offense while centering several wingers, including rookies JJ Peterka and Jack Quinn. The newcomer also took some shifts as a winger and played a point on the power play.

“He was outstanding tonight, could’ve easily walked off with two or three points,” said Amerks coach Seth Appert, who wanted to give Krebs different looks with his new teammates.

Krebs, the 17th overall pick in 2019, said learning about the Sabres’ young talent from GM Kevyn Adams excites him. He has joined an impressive group of prospects in Rochester.

Peterka and Quinn, both of whom are also 20, have already combined to score nine goals and 21 points in just eight games. Amerks goalie Ukko-Pekka Luukkonen and defenseman Mattias Samuelsson are also expected to make an impact in Buffalo someday.

“I’ve got some skill, for sure, that I try to utilize,” said Krebs, who played with Quinn and Sabres center Dylan Cozens on Team Canada. “My hockey IQ, I try to utilize that to make plays. Being not a taller guy but not a smaller guy, I think just playing smart (in) all areas of the rink.”

Krebs’ work ethic helps elevate his prospect status. He grew up with two brothers, so he developed his competitiveness battling them in the basement and on outdoor rinks.

“There was a few cries up to mom saying Dakota or Drew slashed me or something like that,” he said. “So I think that definitely fueled the fire and … helped me build up my competitiveness and become the person who I am today.”

“Then the character and the work ethic, everything you hear is off-the-charts high,” he said.

Adams acknowledged Krebs possesses the talent to play in the NHL right now. Still, they want to make him comfortable in his new organization. Sending him to the minors can take pressure off him.

“That’s what Kevyn’s trying to do, just allow me to settle in and make the most of my time,” Krebs said. “I was thinking about it last night, I want to obviously be in Buffalo, I want to play in the NHL. But at the end of the day, I’m just happy to play hockey each and every day.”

Having suffered a torn Achilles tendon in 2019, Krebs understands how quickly hockey can be taken away. Just weeks before the NHL Draft, a skate blade sliced through his sock on the ice.

“It was definitely a nasty injury,” Krebs said. “Obviously, cutting your Achilles is something you never want to do. I think I definitely learned a lot about myself and the work it takes.”

Krebs’ rehabilitation in Vegas offered him a unique opportunity to experience life in the NHL. He spent six months living with Golden Knights captain Mark Stone.

“I … learned a lot from those guys and I’ve taken it throughout my career,” Krebs said. “I think it matured me definitely. You can never take a day for granted on the ice because that injury, you never know what could happen. It definitely was a humbling experience but I’m better, all healed up now.”

Krebs played his first four NHL games last season and nine more this year. So far, he has registered one assist. On the Golden Knights this season, he averaged 13 minutes, 44 seconds of ice time an outing.

In Rochester, Appert plans to utilize Krebs heavily. Krebs recorded five assists in two games for the Henderson Silver Knights, Vegas’ AHL affiliate, earlier this season. He could be a dynamic talent for the Amerks.

“In the NHL, your minutes are 12, 13 or 14 minutes a game for some of the guys at that age,” Appert said. “Down here, you’re playing 20 to 23 minutes, you’re on the power play and you’re penalty kill. You’re out there at the end of the game, learning how to win or learning from your failure when you do make mistakes. Those things are huge growth opportunities.”

Quinn left Friday’s game late after teammate Casey Fitzgerald’s shot hit him in the head. Appert said he is OK.

Thursday’s 5-2 setback to the expansion Seattle Kraken was the Sabres’ worst performance this season. They looked downright awful at times, making poor decisions and generating little offense. They mustered just 11 shots on goal through two periods.

Still, thanks to goalie Dustin Tokarski, they hung around. Winger Kyle Okposo’s power-play goal 18:01 into the second period briefly put them up 2-1. Twenty-six seconds later, the Kraken tied it.

“It was an atmosphere that these players haven’t seen in two years probably … and I felt that our guys perceived pressure that wasn’t there even though there was a lot,” Granato said on a Zoom call.