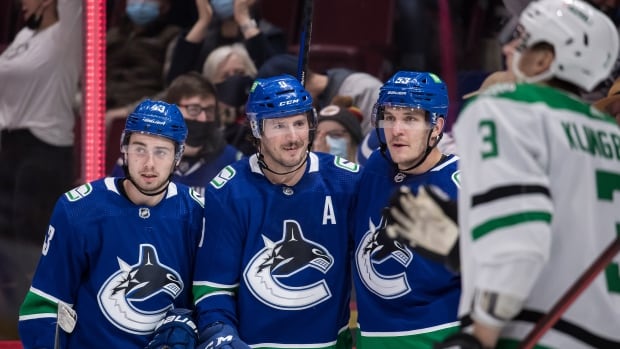 Bo Horvat and Elias Pettersson had a goal and two assists for the Canucks (5-6-1), which are 2-4-0 their last six games. Vasily Podkolzin and Brock Boeser, into an empty net, also scored for Vancouver while defenceman Quinn Hughes had three assists.

The Canucks were three-for-six on the power play. They had collected just three power-play goals on 28 chances in their previous seven games.

Joe Pavelski and Ryan Suter, both on the power play, and Luke Glendening scored for the Stars (4-5-2). Jason Robertson had a pair of assists.

The Canucks scored three goals in just under six minutes, two of them on the power play, to build a 4-2 lead after two periods.

Miller scored Vancouver’s first goal of the game seven seconds after the Stars’ Miro Heiskanen was sent off for tripping. He earned his fourth of the season at 2:19 on a shot from the high slot with Boeser screening Khudobin.

It was Vancouver’s first power-play goal in 18 attempts stretching over five games.

Vancouver goalie Thatcher Demko dives for an incredible paddle save on Jamie Benn. 0:26

Pettersson made it 3-1 on a power play at 6:37 with a shot through a crowd from above the face-off circle. It was his second of the season and first in 10 games.

Horvat made it 4-1 at 8:10, punching home the rebound of a Tanner Pearson shot.

Glendening cut the lead to 4-2 when he took advantage of a Canucks defensive breakdown at 9:38.

The Canucks had a chance to extend their lead with a two-man advantage for 1:11 but couldn’t beat Khudobin.

Horvat intercepted a pass in the Canucks zone to help set up Podkolzin’s goal at 15:45.

Suter drew the Stars to within one at 3:23 of the third on the power play.

Miller picked up his second of the night on a power play at 13:44.

Pavelski gave the Stars a 1-0 lead at 13:35 of the first period, 26 seconds after Hughes was called for cross-checking. Robertson sent a pass across the front of the net that Pavelski at first had trouble controlling but then found the handle and tucked into the corner for his third of the season.

It was the 10th time in 12 games this season Vancouver surrendered the opening goal.

Just a few minutes earlier Demko had robbed Jamie Benn. Alexander Radulov put the puck on Benn’s stick and he looked to have a wide-open net, but a diving Demko managed to get his stick on the shot.