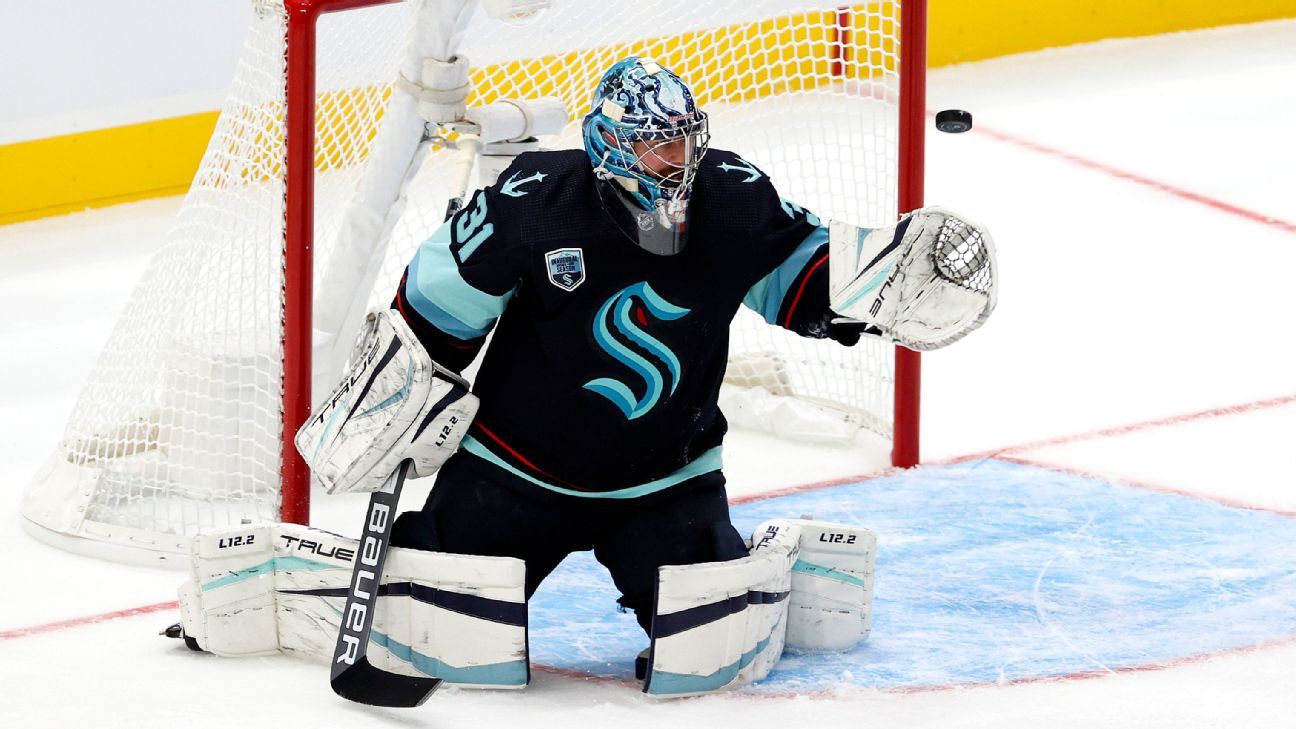 NHL games can be incredibly entertaining, but let’s be honest: They do require an investment of time. If your wager requires you to wait around until the final score, you can push three hours of investment if the thing goes to a shootout.

The first period offers the same wagers as other period-specific bets, including:

*Money line: The team that leads after the first period. This bet can end in a tie and your money is returned. Or you can make a wager without a tie factoring in.

*Puck line: Usually plus or minus 0.5 goals.
*Goal total: Usually 1.5 goals total, and the bet is over or under.
*Both teams scoring in the first or not.
*If a goal is scored in the first 10 minutes of a game or not.

There are also a series of prop bets involving the number of goals scored and the team that ends up leading after one.

My personal preference is the first-period goal total. First, because I’m an impatient sort when it comes to results. But mostly because the trend lines that are established for first-period scoring tend to remain consistent.

The Tampa Bay Lightning are one of the most notorious “slow starters” in the NHL so far this season. Through Sunday’s games, the total goals in the Lightning’s first periods have been one goal or fewer in two of their 11 games. They’ve scored only six goals in the first period on the season.

On the flip side are the Edmonton Oilers, who are among the strongest starters in the league this season. In 10 games, the first period over has hit seven times. They lead the league with 15 goals scored in the opening stanza.

Otto didn’t even know first-period bets existed until 2019, when he noticed a group of teams were hitting the first-period over at a 90% clip.

“The way in which teams want to start games off something that is driven by the coach, based on their philosophy of the game. It’s quite obvious that some teams want to come out in games with tons of speed and chances, to try and score an early goal to put immediate pressure on their opponents,” he said. “There are other teams that want to slow the game down, knowing they cannot compete with these faster-paced teams over a full 60-minute game. So they’re going to want to start the game slow, eliminate chances and hope that they can get to the third period in a tight game, where they can then take some chances.”

Basically, the first period is how the teams intend to play the game, before variables start to impact game flow and strategy.

“Ultimately, circumstances happen within games sometimes that don’t reflect the model,” Otto said, “but on most occasions, the trends tend to hold with how teams generally want to play the game.”

Andy MacNeil had a “quiet and boring existence” growing up in Nova Scotia before heading to Alberta to make money in the oil and gas industry. For the past 10 years, he said, his “interest in hockey has been totally driven by gambling.” He made connections in the industry, the folks at VSiN heard about him through the grapevine and he was hired as a hockey-wagering pundit. He also does occasional work with the New York Post.

We asked Andy some questions about hockey wagering:

What’s your favorite bet on hockey?

MACNEIL: I enjoy betting the money line the most. It’s simple. It’s “who is going to win the game?” and unless otherwise stated, it includes overtime and shootouts. And it’s what got me to where I am, I guess. But it’s not just picking the straight winner of the game. I’m estimating the odds of the game and then I’m trying to find odds that offer value, relative to what they should be. It’s the easiest bet for anyone to make, even if they don’t have a statistical model.

What’s a sucker bet on hockey?

MACNEIL: The goal-scorer props. They’re the most fun bets to make, and don’t get me wrong, you’ll find a good one here or there. They are some of the most attractive bets, but they’re also the ones that are going to suck in people in the most and result in no profit made.

Actually, betting on players not to do things is a good bet to make. It’s going to be super frustrating sometimes, but betting against human achievement is the way to go.

I’m from New Jersey, and I’m not even that cynical.

MACNEIL: Most of these sportsbooks are shading the player props. You’re going to have the top players — and I don’t recommend betting against the top players all the time — shaded towards the over because most people go to the sportsbook to bet on their favorite player to score a goal or to bet on Connor McDavid to score more than 1.5 points.

Do you bet against the shooter in craps, too?

MACNEIL: I specifically stick to hockey. I’m not kidding myself. I’m not super high-IQ genius where they’re going to make movies about me beating the sportsbooks, right? I’m just trying to take my piece of the pie while it’s here. I never looked at games like blackjack or poker, thinking I could destroy people doing that. That would be foolish. The only thing I ever looked at as something I could really beat up on is hockey. I was willing to forget everything I knew about hockey to drop the preconceived biases that I had about things.

How long into a season before you get a real handle on trends?

MACNEIL: You’re starting to see who teams are right now, but things can change so quickly. You saw that the other night between the Dallas Stars and the Calgary Flames, a team that the market absolutely fell in love with because they have great underlying numbers. Dallas hadn’t looked good. But when it got to minus-145 [on Calgary] when I woke up, that’s when I start to back off. You start to feel bad if you put too much stock into teams too early. These teams are not going to be who you thought they were. The trends like home ice are up and down each week. It’s always in flux. I look at the underlying metrics: The shot share, the expected goals and score adjustments — you don’t want to just look at the raw numbers, you want to take the score into account to see how your bet did. If all that’s trending in one direction vs. core analytics and I have to make adjustments, then I’ll make adjustments. And of course stay on top of injuries.

Finish this sentence: When I get on hockey, the identity of the starting goalie is _______.

MACNEIL: Something that I project more often than not. I strongly believe that if we were to take the element of surprise away from the betting marketing, with injuries and goaltending announcements, sportsbooks could keep the limits really low during the day. I think it would have adverse effects. If you’re a recreational bettor, it’s tough to sit in front of the computer all day. I don’t expect anyone to do that. But there are websites like Daily Faceoff that are diligent in tweeting that information all day. Just set an alert on your phone for it and then be ready to get the bet in. When I had a real job, I used to spend time away from work to get a bet in. Those 15-minute trips to the bathroom, when you don’t have to go to the bathroom, you know? You gotta do what you gotta do.

MACNEIL: I wish I had a good answer here, but … I don’t enjoy the games. [Laughs] The most exciting thing for me is waking up at 5 a.m. and getting down on a good price for a team before news comes out and the market moves. That’s the goal. That’s winning to me. I can’t control if Mikko Koskinen lets in five goals for the Oilers, but I can control what price I play. Really early on, it was about what price I paid, and that was fun to me. I find myself turning the games off some of the times — especially if the games aren’t going well.

So the thrill’s in the chase for you?

MACNEIL: It’s like chasing a stock price. That is the thrill for me. If people look at it that way, then it can be fun. This is an area where an average guy like me can hone his craft, open his mind up to thinking about things differently, and it was due to gambling. Because I don’t want to lose money.

A look at some of the recent betting trends and if they’ll hold.

Seattle Kraken 7-3-2 over/under: We’ve all been trying to get a handle on who or what the Kraken are going to be this season, a debate complicated by confounding losses like that one against the then-winless Arizona Coyotes. The fact that seven of their first 12 games have gone over is a surprise, given the expectations we had for their goaltending. But Philipp Grubauer has been the league’s most disappointing goalie (minus-9.9 goals saved above average) and Chris Driedger has been limited by injury, resulting in an NHL-worst .871 team save percentage. We have to imagine that won’t last.

Kyle Connor shot props: The Winnipeg Jets winger is third in NHL this season with 46 shots in 11 games. The typical shots on goal over/under prop is 2.5 for most players with a decent volume. Connor has topped that total in eight of his 11 games. But everyone with a box score knows this, so there might not be much value here as a prop unless his shot totals fall off. Which they won’t.

Toronto Maple Leafs 4-8-0 over/under: The Leafs have hit the over in two of their past six games, including their 5-2 win over the Boston Bruins on Saturday. Lost in the attention given to Toronto’s offensive stars is that the Leafs have been among the best 5-on-5 defensive teams in the NHL over the last two seasons (2.06 expected goals against). In seven of 12 games, they’ve held opponents to two goals or fewer.

Washington Capitals 8-3 on puck line: The Capitals are 5-2-4 on the season. Their puck-line record is an indication that they’re beating the underdogs soundly and hanging close when they’re the underdog, like in two one-goal losses against the Florida teams. They have an interesting stretch coming up against the Sabres, Red Wings and Blue Jackets that’ll test this.