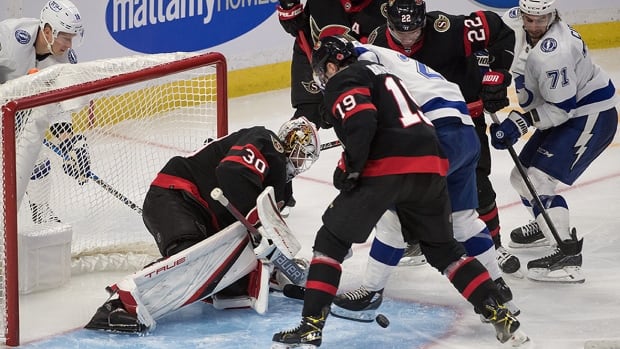 The Ottawa Senators have cancelled Monday’s practice a day after defenceman Nick Holden and associate coach Jack Capuano were placed on the NHL’s COVID-19 protocol list.

The Senators said the decision to cancel Monday’s practice was made “for precautionary reasons.”

Roster update: The <a href=”https://twitter.com/hashtag/Sens?src=hash&amp;ref_src=twsrc%5Etfw”>#Sens</a> have placed forwards Connor Brown and Dylan Gambrell in the NHL’s COVID-19 protocol. <br><br>In related moves, the team has recalled forwards Scott Sabourin and Egor Sokolov from <a href=”https://twitter.com/BellevilleSens?ref_src=twsrc%5Etfw”>@BellevilleSens</a>.

Holden and Capuano were placed on the protocol list Sunday, a day after Ottawa played a home game against the Tampa Bay Lightning.

Holden, 34, has one assist in 10 games in his first season with Ottawa, his 11th in the NHL. He has 45 goals and 144 points in 523 regular-season games with the Columbus Blue Jackets, Colorado Avalanche, New York Rangers, Bruins, Vegas Golden Knights and Senators.

The Senators recalled defenceman Erik Brannstrom from Belleville of the American Hockey League to replace Holden on the roster.

Ottawa is scheduled to visit the Boston Bruins on Tuesday.

Ondrej Palat scored with less than two minutes left in the third period of Tampa Bay’s 5-3 win in Ottawa. 1:01