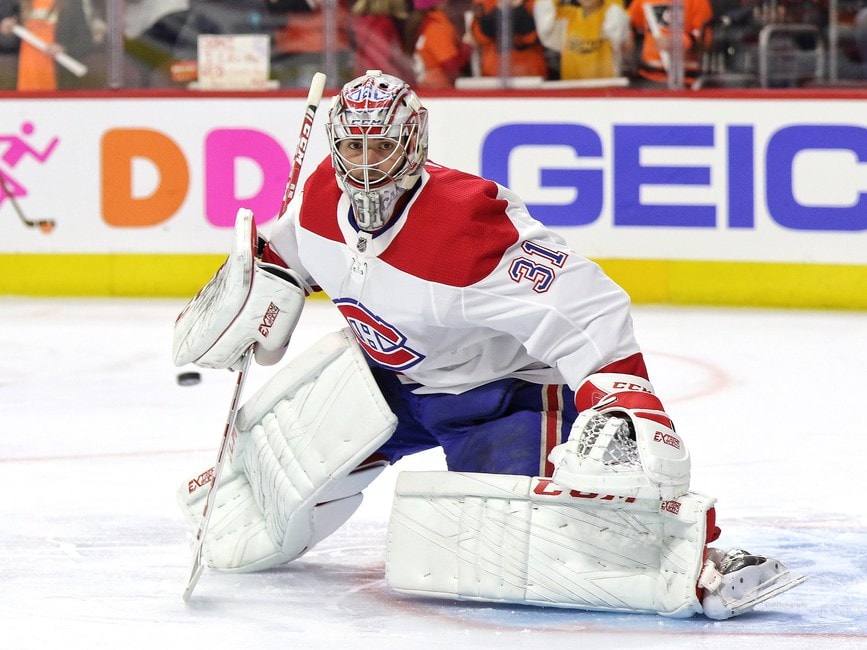 The Montreal Canadiens received the best news possible last week amid a miserable 3-10 start to the 2021-22 campaign. Carey Price will return to the team’s entourage beginning this week after spending the past month in the NHL’s player assistance program.

Even though their best player is back in the fold, the Habs shouldn’t rush him back to his crease hoping he’ll salvage a season that is probably already lost.

Not an Ideal Situation

The hope was that the Canadiens could stay afloat during Price’s absence, but that certainly hasn’t been the case given the growing injury list which has thinned out an already flawed roster. This means that the circumstances surrounding his comeback are less than optimal, not great for a player trying to find his way again.

Just because he’s back with the team doesn’t mean Price will be seeing game action anytime soon which is a good thing. It will be a gradual process that includes ensuring that his surgically repaired knee is competition-ready and getting his doctors’ go-ahead to speak with the media.

While the 34-year-old is used to carrying the Habs on his shoulders, he shouldn’t be counted on as the saviour this time around. The competitor in him will want to make up for lost time, but he must continue to prioritize his health and well-being. There’s no need to put his body through additional wear and tear. After all, it’s highly unlikely that even Price can pull the Canadiens out of the mess they are in any way.

Jake Allen Can Split the Workload

When Price does get back between the pipes, he can rely on Jake Allen to reduce his workload. Now is the perfect time for the Habs to employ a 1A and 1B goalie tandem so that the two netminders can essentially split the remaining starts half and half.

Related: Canadiens Don’t Miss Price Most of All Their Injured Players

Like the rest of his teammates, Allen has struggled this season, but he is much better suited for a supporting role and will feel less pressure with Price as his partner. Plus, the Canadiens improved their goalie depth by claiming Samuel Montembeault off waivers from the Panthers, so there is no need for Montreal’s franchise player to be overworked in an attempt to salvage the season.

This type of scenario is exactly why general manager Marc Bergevin acquired Allen last year, a reliable and experienced backup who can ease the burden for Price when needed. Case in point, Allen won the Jacques Beauchamp-Molson Trophy last year as the Habs’ unsung hero after he propelled the team into the playoffs at the end of the season while Price was out with a concussion.

With 69 games remaining in the 2021-22 campaign, some may think it’s too early to start thinking about the offseason and the draft lottery, but Montreal isn’t like any other market which means that fans are already looking ahead to next season.

The Canadiens sit 30th in the NHL standings which is much closer to the No. 1 overall selection in the 2022 NHL Entry Draft than a playoff spot. A lottery pick that the franchise needs more right now than potentially being in another postseason race. Not to mention that the first-round pick Bergevin traded to the Arizona Coyotes for Christian Dvorak this summer is Top 10 protected so it would be a shame to climb back into playoff contention because Price plays the bulk of the remaining games, only to come up just short and be forced to give Arizona a pick in the 11-16 range while keeping the Carolina Hurricanes’ lower first-rounder.

Let’s not forget the draft is in Montreal this year too which makes the opportunity to select a potential game-changer at the top of the board even more enticing. A player who will help the Canadiens in both the short and long term, who could be the centrepiece in another Stanley Cup run before Price calls it a career.

Although the Canadiens desperately need some of Price’s heroics, limiting his appearances until the end of the season will only be beneficial to both him and the team going forward.

Melissa has been covering the Montreal Canadiens for The Hockey Writers since March of 2020. She is also THW’s Social Media Community Manager and a co-host of Chicks & Sticks, a weekly show produced by THW. In 2006, she spearheaded the social media initiatives for Tennis Canada and Rogers Cup and was the primary person responsible for their upkeep for over 10 years. She has written articles for multiple tennis websites and interviewed the likes of Roger Federer and Serena Williams. While her career in sports started in tennis, her first love has always been hockey. She has a journalism degree from Concordia University.