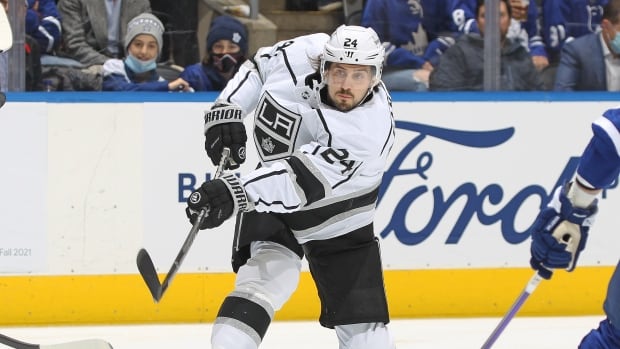 Phillip Danault had two goals and an assist for Los Angeles (6-5-1), while Andreas Athanasiou, with a goal and an assist, former Leafs forward Trevor Moore and Adrian Kempe, into an empty net, provided the rest of the offence.

John Tavares replied for Toronto (7-5-1). Jack Campbell, who was Quick’s understudy with the Kings for parts of two seasons, made 24 stops in his first career start against his former team.

After hitting an early post, the Kings went up 1-0 at 10:52 of the opening period when Moore stepped past Timothy Liljegren and Rasmus Sandin — his teammates with both the Leafs and the American Hockey League’s Toronto Marlies — before firing his first goal of the season past Campbell.

The 29-year-old netminder, who rediscovered his game in Los Angeles after the Dallas Stars selected him 11th overall at the 2010 NHL draft, was acquired by the Leafs from the Kings along with bruising forward Kyle Clifford for Moore and two draft picks in February 2020.

Danault has a pair as Kings roll over Leafs 5-1

The home side, which had a string of slow starts earlier in the schedule, came close at the other end moments later when Quick robbed Wayne Simmonds in front off a Jason Spezza feed.

Los Angeles had scored just five times in the first period coming into Monday, but doubled its lead at 14:21 when Athanasiou blew by Leafs blue-liner Jake Muzzin — another former King — and snuck a shot through Campbell for his first.

Toronto’s power play entered play 5 for 10 over the Leafs’ last four games, and connected early in the second when Moore went off for hooking. Tavares was robbed by the 35-year-old Quick early in the man advantage, but buried his seventh at 1:51 off a setup from Mitch Marner and William Nylander.

The goal was the 99th in blue and white for Toronto’s captain, and the 14th consecutive Leafs goal scored by either Tavares, Marner, Nylander or Auston Matthews, who hit the post a few minutes later.

But the Kings restored their two-goal edge at 13:56 when Danault, who signed with Los Angeles in free agency after helping the Montreal Canadiens make last season’s Stanley Cup final, scored his second on a sequence that saw the puck pinball off his skate twice and dribble over the goal line.

The NHL’s situation room initiated a video review to determine if there was a distinct kicking motion by the Kings centre, but the call on the ice stood.

In the midst of a stretch of nine of 11 games at Scotiabank Arena, the Leafs had a couple terrific opportunities to get back within one before the period was out, but Quick robbed Marner and Nylander before Matthews fired wide just wide with the Los Angeles netminder out of position.

After killing off the visitors’ third power play of the night early in the final period to stay within two, Toronto got a man advantage of its own, but couldn’t generate much on the stingy Kings.

Quick denied Nylander on the doorstep with five minutes to go. Danault scored with 4:30 left in regulation before Kempe iced things into an empty net.