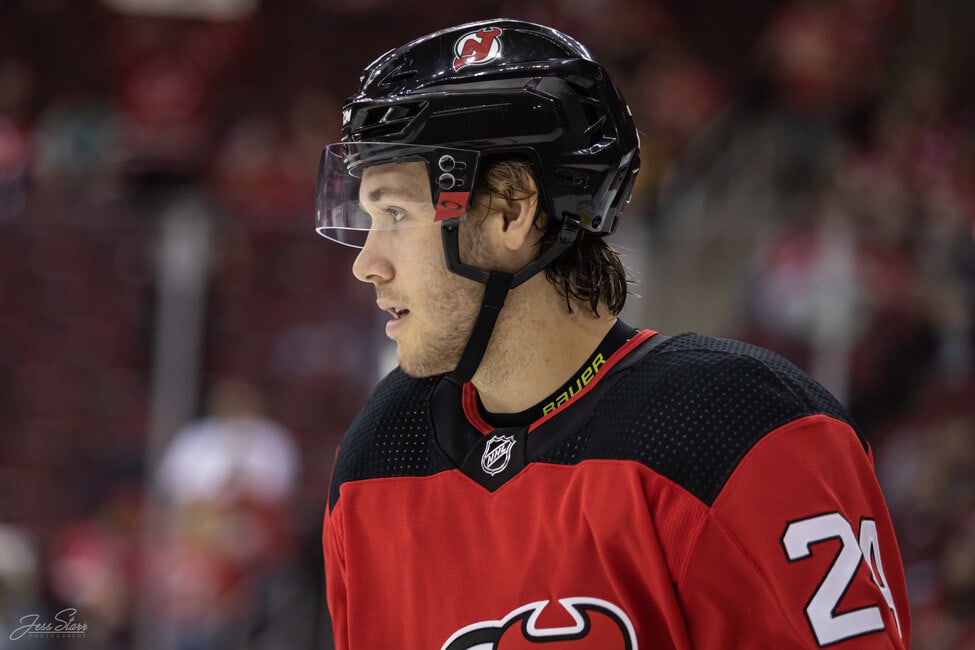 There was energy around the New Jersey Devils, even before they took the ice for the warmup on Tuesday night. As I exited the media room to walk towards the elevator, I turned to my right and saw a handful of Devils taking part in their pregame soccer tradition. Spirits were high as they swiftly moved the ball around. Echoes of shouting and laughter filled the corridor as I made my way to the press box.

The Devils were preparing to battle the best team in the league, the Florida Panthers. It was a tall order, and the only thing working in the Devils’ favor was that the Panthers had played the night before. The crowd of 10,627 gave a loud cheer to welcome back Mackenzie Blackwood as the starting lineup echoed throughout the arena. It was his first game in front of the home crowd this season.

The game began like most before. Michael McLeod attempted to gain possession of the puck as the referee dropped it at center ice. The Devils continue to take too many penalties, and Alexander Holtz was called for tripping 50 seconds into the game. Even as I thought I had seen this show before, I realized the team looked different, especially their puck management.

Through 11 games, the Devils have been responsible for 122 giveaways. The team has been inconsistent with their passing, but like most of New Jersey’s game, they have a good foundation to build upon.

“There are a few places that we would like to clean up, but I think there are quite a few they [Panthers] would like to clean up too,” said head coach Lindy Ruff. “When you put a team under pressure, you can create some opportunities. They put us under duress a couple of times, and we forced a few plays into the middle of the ice.”

The Devils had nine giveaways against the Panthers. Of those, six were in the defensive zone. They had to play smart with the puck, as the Panthers do not need much time or space to get the puck in the back of the net. Ruff was mostly satisfied with his team’s puck management and understands that his players need to take the occasional risk to make the play: “Overall, I thought the decisions we made were a lot better than what we have made on the road trip. There were people open on our road trip where we didn’t try and make the plays. I think, sometimes, when you’re too safe, you’re not going to win hockey games.”

During the first period, Andreas Johnsson scored the first of the Devils’ seven goals on the power play. As the crowd jumped to their feet, you had to wonder if it was out of shock or to celebrate. It was probably a little bit of both. Their power play has not been effective this season, and with the loss of Jack Hughes and Dougie Hamilton, it is ranked near the bottom of the league. Last night, New Jersey connected twice on the man advantage thanks to Johnsson and Pavel Zacha, who scored in the third period. The key to their success was to simplify their play and keep the puck moving.

“You try to keep it simple, and get more pucks on net,” said Nico Hischier. “We had some good looks. At the end, we hit the post and that could have went in too. We just got to move the puck fast. Let the puck move and not be afraid to shoot pucks. That’s how you score goals.”

There were 13 different Devils players who earned a point in Tuesday’s victory. PK Subban and Ty Smith both scored their first goals of the season, while Jonas Siegenthaler, Alexander Holtz and Jesper Boqvist all notched their first point of the 2021-22 campaign. Coach Ruff has previously told media he wants to see his defensemen chip in offensively, and four of his defensemen finished the game on the scoreboard.

I can safely say last night was one of the most complete performances I have seen from the Devils thus far. Their resiliency was tested at the start of the second period after the Panthers scored two goals in the first two minutes. I asked Hischier what the energy was like on the bench compared to prior games.

“Great energy,” said Hischier. “We tried to stay positive the whole time on the bench. Obviously there were some things that had to be said, but besides that we tried to keep it positive. Just go for the next shift, and stick together.”

I would be remised not to mention their moment of silence for Earl Laycock Jr. who was affectionately known as “Dancing Earl” by fans. As I stepped out of the elevator and into the press box, I saw a worker in tears after learning of his passing. He was an employee at the arena since 2007, and for fans was a huge part of the Devils experience. Prior to the singing of the national anthem, announcer Joe Tolentino asked for a moment of silence to remember Laycock. Additionally, all guest services members wore his photo on a pin and flowers were placed by his section.

The Devils did look different on Tuesday night. They were without key players but did not let that affect their on-ice production. There were no passengers, as each player contributed in their own way, even if they did not register a point. The team is off today and will return tomorrow to host the New York Islanders at Prudential Center. The Islanders have 12 points this season and are right below the Devils in the standings. Thursday night will mark the return of former Devils Andy Greene, Kyle Palmieri and Zach Parise. Fans can watch the game on MSG and MSG+.