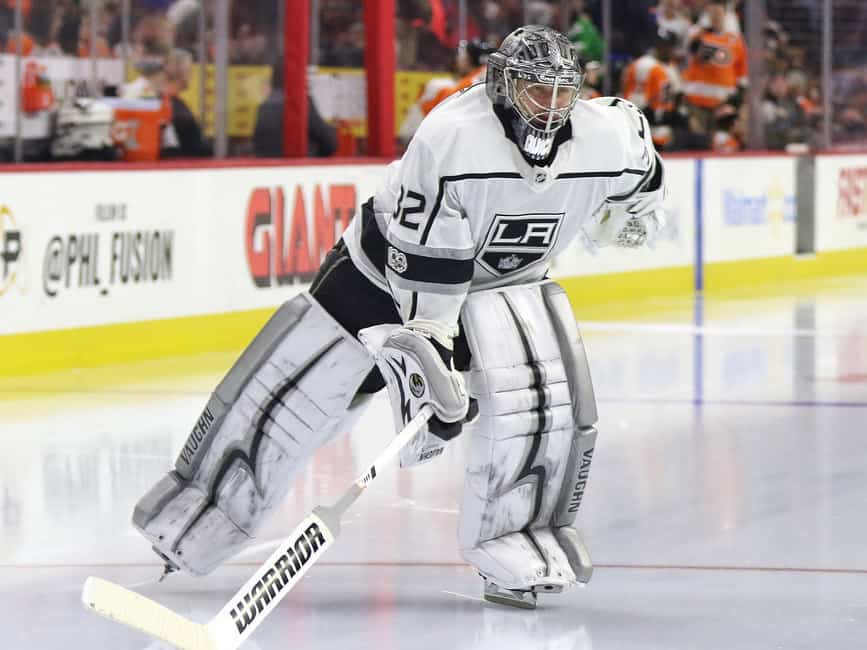 After defeating the Ottawa Senators 2-0 onThursday night, the Los Angeles Kings have now won seven straight. It was a low-key game, and the Kings were not at their best, but they found a way to win. Here are three takeaways from the game.

Even though the Kings didn’t play great in front of goaltender Jonathan Quick against the Senators, he stood strong and earned the shutout victory. He finished the game with 34 saves and three goals saved above expected, despite suffering a shot to the head in the second period. Senators forward Tim Stutzle made incidental contact with Quick’s head as he chased a puck behind the net. It was an unfortunate play that could have ended in a serious injury, but after Quick was checked by trainers, he was deemed okay to continue.

Quick also got some help from the post, which saved at least three shots that beat him. Still, he was dialed in and deserved first star honors. He continues to cement himself as the team’s number one goalie after back-to-back magnificent performances. We’ll see how Cal Petersen responds on Saturday against the Winnipeg Jets, as he has also improved in recent games and is looking to take the starting job from Quick. The competition in net is good for the Kings, especially as both goalies start to find their game.

Kings’ Power Play Gets on the Board

The Kings’ power play has struggled recently, especially on the road; they’d only scored one before this game. It wasn’t a pretty goal. Anze Kopitar benefited from a fortunate bounce off a Senators defenseman, but they’ll take it. When a player is struggling to score, they say it just takes one to go in off a skate or a backside to open the floodgates. I’d say that’s what LA’s power-play needed, and that’s exactly what they got.

It was Kopitar’s first goal in five games, bringing his season total to a team-leading eight. With a secondary assist, Adrian Kempe extended his point streak to six games. Kale Clague also grabbed his fifth assist of the season on this goal.

Clague has been a great story this season. He was waived after training camp, failing to beat out Olli Maatta and Austin Strand for a roster spot, but since he was called up to help the injury-stricken blue line, he’s earned his place in the lineup. It’s been a perfect opportunity for Clague since the team desperately needed someone with his skill set – an offensive puck-mover who can quarterback the power play – and he’s filled the role well. It’s hard to say what will happen when Drew Doughty comes back, but as of now, I imagine Clague will keep his spot over Maatta.

Andreas Athanasiou missed the first 10 games of the season with a hand injury and has looked very good since returning to the lineup. He’s had a point in every game he’s played in so far, with five points in his four games. He’s brought speed and finishing to the second line, adding a new element to the team’s offense. The team re-signed him in the hopes that he would provide secondary scoring, and through four games, he’s done that and more.

Related: Kings’ Top-6 is Amongst the League’s Best

My only criticism is that he isn’t shooting the puck enough. He’s had some great scoring chances but tried to make the extra pass instead of shooting himself. That might be due to a lack of confidence in his shot after an injury to his hand, but I’d love to see him pull the trigger more often. Where Athanasiou fits in once everyone is healthy is uncertain since he has earned a spot in the top six.

Kings Still the Hottest Team in the League

Against almost any other team, the Kings likely would have lost this game. If they needed a little luck to sustain their winning streak, they got it against the Senators. Stellar play from their goalie and a severely weakened Senators lineup helped LA improve their streak to seven games. They’ll look to sweep their Canadian road trip on Saturday against the Jets, but they’ll need to be much better if they want to win.