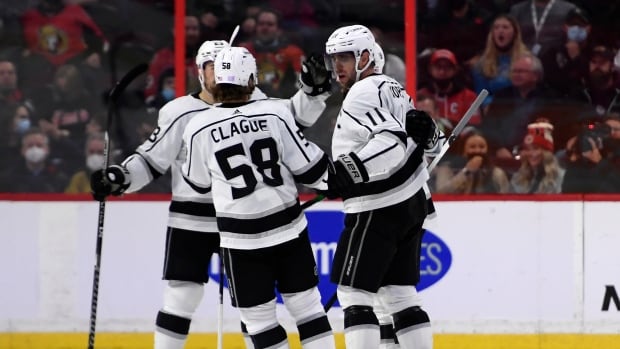 The Los Angeles Kings dealt another blow to the reeling Senators on Thursday night, shutting out the short-handed hosts 2-0 to extend Ottawa’s winless skid to six games.

With nine players in the NHL’s COVID-19 protocol, the Senators (3-9-1) couldn’t manage any offence against a surging Kings side that has won seven in a row. Anze Kopitar and Andreas Athanasiou scored for Los Angeles (8-5-1) and Jonathan Quick made 34 saves for his 55th career shutout.

“There’s not a guy that I can say didn’t give everything he had,” said Senators coach D.J. Smith. “Jonathan Quick is the difference … it’s unfortunate when we’re this short-handed, but I thought our guys couldn’t play much harder.”

The Senators, who are 0-5-1 in their last six games, were without six regulars on Thursday morning. Goaltender Matt Murray and forward Alex Formenton joined the protocol list later in the day and Nikita Zaitsev was added about an hour before game time.

Ottawa is scheduled to play the Pittsburgh Penguins on Saturday night.

The Senators (3-9-1) were already without defencemen Josh Brown, Victor Mete and Nick Holden, as well as forwards Austin Watson, Connor Brown and Dylan Gambrell due to COVID-19 protocol.

Between injuries and the protocol list, Ottawa was without 13 regulars. Lassi Thompson made his NHL debut and Dillon Heatherington made his season debut after both were recalled from AHL Belleville.

Filip Gustavsson stopped 34 shots for the Senators and kept them in the game with a solid effort.

“We didn’t open things up. Once we got to one [goal] we were patient enough to get to two.”

Making matters worse, Ottawa was forced to play with just five defencemen after Artem Zub left in the first period with an upper-body injury. There was no immediate update on the severity of the injury.

“It’s not a fun situation,” said Thomas Chabot, who played almost 32 minutes. “We already knew we were missing a lot of players and then you start the game and you lose another defenceman.”

Kopitar opened the scoring in the first period with a power-play goal. The Senators had a great opportunity on the power play midway through the period, but couldn’t beat Quick.

Athanasiou made it 2-0 with just over three minutes remaining as he tipped Alexander Edler’s point shot.

“We played hard, we did a lot of good things, it just didn’t go in for us,” said Smith.

Earlier in the day, Senators forward Shane Pinto practiced in a regular jersey for the first time since Oct. 21 when he suffered an upper-body injury.

“That is just a remarkable goal!” ⚾️
Sabres face the Red Wings in Atlantic Division action
3 Trade Destinations for Predators’ Dante Fabbro
How lessons from 2019 have impacted the Blues’ strategy this season
Saturday wrap: Bibeau shines for Senators