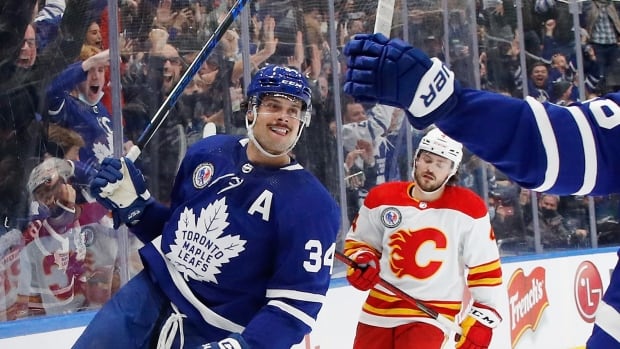 Auston Matthews scored at 2:32 of overtime as the Toronto Maple Leafs defeated the Calgary Flames 2-1 on Friday night.

Ondrej Kase had the other goal and William Nylander notched two assists for Toronto (9-5-1). Jack Campbell made 30 stops for the Leafs, who have won seven of their last eight.

Vlader stopped Matthews on a breakaway and Mitch Marner on a followup opportunity in overtime before Campbell shut the door on a frantic sequence in Toronto’s end.

But Matthews got another chance on his next shift, and beat Vladar between the pads for his sixth goal of the season.

With his netminder shutting the door on chance after chance, Kylington started a break the other way five minutes into the third period. The smooth-skating defenceman dished off to Johnny Gaudreau before collecting the return feed and beating Campbell with a move to the backhand for his second goal of the season at 4:55.

Auston Matthews was stopped on his first breakaway opportunity but made no mistake on his second of the extra frame to sink Calgary in OT. 1:33

Vladar, who got the call ahead of regular starter Jacob Markstrom in the second game of a back-to-back following Thursday’s 4-2 loss to Montreal, continued to shut the door for the visitors until Kase tipped a Nylander shot at 12:54 for his third goal of the season.

The Flames got their first power play when Kase went off for tripping, but the Leafs had the best chance when blue-liner Jake Muzzin hit the post.

The Leafs will play their third game in four nights Saturday in Buffalo against the Sabres, while the Flames visit the Ottawa Senators on Sunday.

The Hockey Hall of Fame’s class of 2020 was honoured before the game after last year’s induction ceremony was postponed by the COVID-19 pandemic.

Jarome Iginla, who served as Flames captain from 2003 through 2013, Marian Hossa, Kevin Lowe, Doug Wilson and Kim St-Pierre are set to go into the hall in the player category Monday, while Ken Holland will enter as a builder.

Campbell fired out his glove to deny Dillion Dube on a 2-on-1 rush midway through Friday’s physical first period before Kase fired just wide after the Leafs caught Calgary on a bad change.

The Leafs got another man advantage late in the period, but the Flames goaltender was there to deny Matthews and Nylander on good opportunities.

Making just his third start of the season, and first since Oct. 26, Vladar then stopped Nylander with his glove after he slipped behind Calgary’s defence.

Tied with Tavares for the team’s goal lead with seven, the Leafs winger had another terrific chance late in the second after tipping the puck past Mikael Backlund and stepping beyond Rasmus Andersson, but Vladar was there once again to shut the door.

Kase saw his chance off the rush stopped by Vladar early in the third, and Toronto couldn’t push the puck over the line on the subsequent scramble moments before Kylington’s opener.