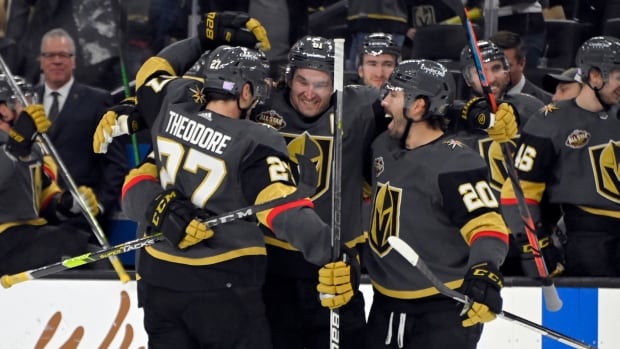 Evgenii Dadonov and Jonathan Marchessault each scored twice and the Vegas Golden Knights beat the Vancouver Canucks 7-4 on Saturday night.

After Vancouver goalie Thatcher Demko was called for delay of game for knocking his own net off the post, Marchessault scored his 100th goal as a Golden Knight to put Vegas ahead 5-4, a lead it wouldn’t relinquish to the delight of 18,261 in attendance.

“Tonight was not the prettiest game for us overall, we definitely could have done a better job in the first two periods,” Marchessault said. “Good teams find a way to win, and right now that’s what we’re doing. We’re just working hard, everybody’s on the same page.”

Evgenii Dadonov’s two goals and an assist lead Vegas to a 7-4 win over Vancouver. 0:58

“The way the game started tonight dictated how open it was,” Vegas coach Peter DeBoer said. “You’re down 2-0 10 minutes in, it’s human nature you’re opening it up to try and get yourself back in the game and that’s what it looks like. Some nights games like that get away from you when you do that, tonight we got more saves than them and found a way to climb back in it and score some goals.”

Vancouver is now on a 2-6-1 slide since opening the season 3-2-1. It’s a skid the team appeared poised to end after coming out firing.

Miller gave Vancouver an early lead when he raced into the zone alone and lasered a wrist shot through Lehner’s pads, extending his point streak to seven games. The Canucks pushed their lead to 2-0 when former Knight Brad Hunt sent the puck through the slot to Conor Garland, who threw the puck at the crease where it deflected off Pearson’s skate and into the net.

With Canucks defenceman Oliver Ekman-Larsson serving a four-minute double-minor and Justin Bailey in the box for hooking, Dadonov punched home a loose puck in front of the net to cut Vancouver’s lead in half late in the first period.

Smith tied the game early in the second, when he corralled the puck in the neutral zone, skated in and roofed the puck over Demko’s glove for his fifth goal in 10 games. McNabb gave the Golden Knights a 3-2 lead with his second goal in the season.

Lehner stopped 16 consecutive shots after Vancouver took its 2-0 lead. But after getting stuffed at the doorstep, Hoglander was there to dig the puck from beneath Lehner and tie the game at 3.

Vegas’ fourth goal came as Dadonov’s 360-spinning pass landed perfectly on Leschyshyn’s blade to make him the third Vegas rookie to score his first career goal in the last two games. The lead wouldn’t last though, as Hoglander smacked a loose rebound off Lehner’s pad into an open net for his second career two-goal game.

Dadonov got his second goal of the game after the Canucks turned the puck over and he broke into the zone on a 2-on-1 rush with captain Mark Stone, who returned to the lineup after missing the previous 12 games. Marchessault scored his second of the night less than two minutes later to provide the final margin.

“I thought it was a much better effort from our group tonight,” Vancouver coach Travis Green said. “I loved our start in the game. Obviously, there’s a couple of plays in the game that we’d like to have back, and there’s definitely a couple of calls that should’ve never been called against us.

“I don’t usually complain about refereeing, but the call against Demko was atrocious, and the … double minor for roughing, is very questionable for me as well. They were both critical parts of the game.”