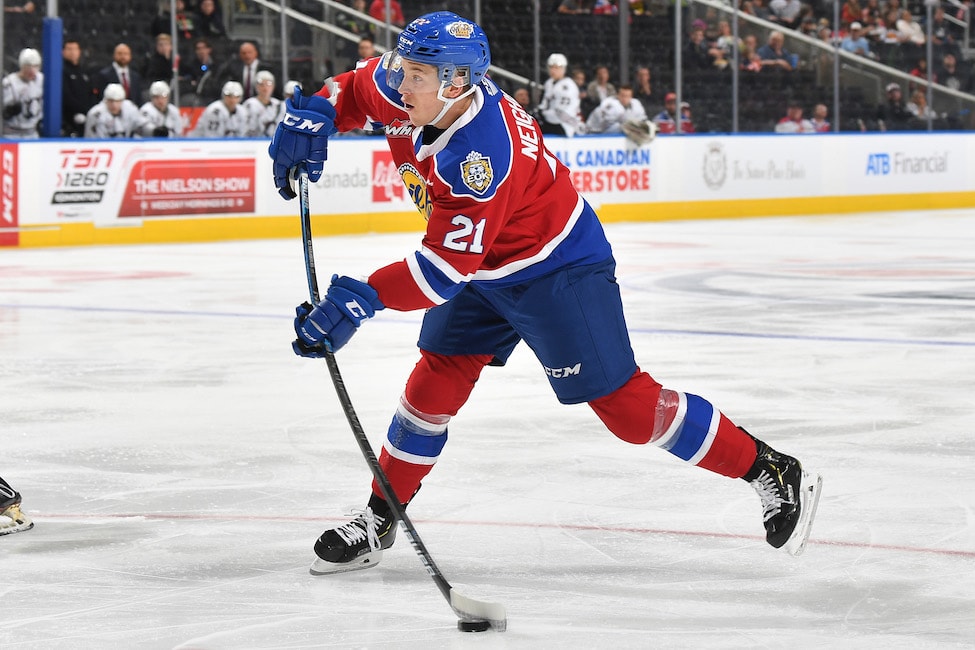 Wednesday, Nov. 10, the St. Louis Blues assigned their 2020 first-round draft choice, Jake Neighbours, to the Western Hockey League (WHL) Edmonton Oil Kings. The promising forward was an outside candidate to make the NHL roster this season as there were few roster spots available to him. However, after an impressive training camp and preseason, he was issued a full nine-game trial before being reassigned, allowing for his three-year, entry-level contract to slide and start next season. Had the Blues opted to play him a 10th game, his entry-level contract would have kicked in and begun, regardless of whether they reassigned him to the WHL.

In the nine games that the forward played, Neighbours scored one goal and two assists. While the forward was on a 26-point pace for his rookie season, the 19-year-old was playing with house money as his role was never truly “available” to him with the looming return of Oskar Sundqvist from long-term injured reserve. Neighbours proved to the organization that he was worthy of a first-round draft choice and is ready to play “Blues hockey.”

Though the 2020 first-round pick was reassigned, there is a lot of hope still to be had in his future with the Blues. Time was not wasted by the Oil Kings as they named him their team captain for the 2021-22 season two days later.

So, why did the Blues return him to the WHL and not keep him this season if he was effective and scoring in the NHL? To put it simply: ice time. When Neighbours completed his ninth game, the team’s management had a difficult decision to make. They could have chosen to keep him in the NHL and sat the prospect in the press box or assign him a fourth-line role.

Instead, the club sent him back to the WHL to play as much as possible and continue his development. The Blues’ front office knew that it would not be as beneficial for him to play in a role different from the one he is best suited for long-term. Electing to move Neighbours to the WHL offers more of an opportunity than it may seem.

Neighbours will be returning to his junior club with a new sense of determination and understanding of what it takes to play the sport at the highest level consistently. He can take the lessons learned (from ‘Good Neighbours: Blues made young prospect feel at home,’ The Post Dispatch, 3/30/21) during his training camp and time with Blues veterans, like Brayden Schenn, Ryan O’Reilly, and David Perron. He now has the opportunity to grow his personal game and help lead and guide his teammates in the same way that the Blues leaders did for him.

The Blues are certainly not strangers to the nine-game trial period and continued dedication to player development. It seems like not that long ago that another former first-round draft choice, Alex Pietrangelo, was reassigned to the Niagara Icedogs. While there is no physical evidence to show reassignment guarantees future success, the Blues know that taking their time and not rushing their young players to the NHL as soon as possible can often help in the long term.

The physical and mental maturity level of an 18-or-19-year-old prospect making their way into today’s NHL for the first time can be difficult. Granting these prospects the opportunity to take another one to three years even can allow these players the best chance and opportunity to hit the ground running once they officially arrive in the NHL.

The Future is Bright for Neighbours

Even before the 2021-22 Blues training camp started, Neighbours earned every opportunity given to him this year. However, the Blues have other fourth-line options currently that can play that role moving forward. It is likely one of the reasons why the club elected to move him to the WHL and recall forward Dakota Joshua. The future of the Blues organization will need a player like Neighbours ready to take on a top-six role. It is crucial that he and some of his fellow prospects’ development be taken slowly and carefully watched over before they are given their opportunity at a full-time role in the National Hockey League.

In the meantime, Neighbours will help lead a very talented Oil Kings lineup and continue to develop mental and physical maturity. The 2021-22 season will be his fifth with the Oil Kings. The forward has a combined 104 points in 84 games over the past three seasons, including one assist in his first game of the 2021-22 season.

Mike is a lifelong fan and enthusiast of the St. Louis Blues. The love of the game was passed down to him by his father and he has never looked back. Since the creation of his personal hockey blog in 2016, Mike has enjoyed spinning his own personal take and love of the game for anyone who wants to read or talk about it. He has enjoyed over a decade of fantasy sports championship wins and the not so fun losing and rebuilding seasons in dynasty leagues. Mike is a longtime fan and follower of not only the Blues, but of the Central or “Norris” division as a whole.