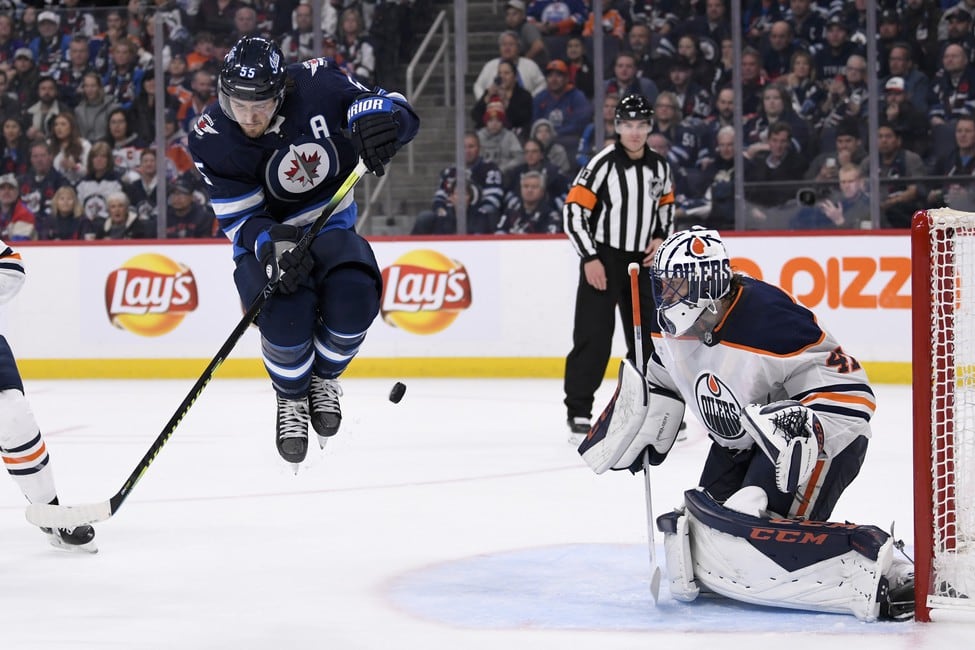 The Winnipeg Jets host the Edmonton Oilers in the last of a seven-game homestand that has seen the Jets successfully defend home ice by taking nine of 12 available points with a 4-1-1 record over the first six contests. They now face the Oilers, who possess an impressive 11-3-0 record in a back-to-back situation where they host Edmonton, then two days later, they travel to the Alberta capital to square off again.

On paper, this should be a pretty even matchup and it will be if the Jets can simply manage to stay out of the penalty box. That’s it! If they manage to play 5-on-5 for a majority of those two games, they have a real chance to snag two or three points from Edmonton. Winning both games is very doable, just highly unlikely considering the firepower the Oilers possess up front, particularly with the man advantage.

Jets Need to Play to Their Strength to Win

The Jets have been a very solid offensive team through the 14 games. After a rocky start in their opening three-game road trip, which saw them suffer at 0-2-1, they have gone 8-1-2 in their last 11 games and scored 3.3 goals per game. The problem is the Oilers are the top-scoring team in the NHL and are the only team in the league to be averaging more than four goals a game. The initial advantage would seem to go the Oilers, but keep reading and you’ll see perhaps there’s more to the story.

The Jets’ depth will be a key issue in these two matchups. Since Mark Scheifele and Blake Wheeler both went under COVID protocol, the switch of Kyle Conner to a line with Pierre-Luc Dubois has paid huge dividends, and to date, a duo head coach Paul Maurice has been unwilling to separate. Add the likes of Andrew Copp, who is currently playing above his contract, and Nikolaj Ehlers, who is back on track offensively; the Jets have multiple options to drop into a Scheifele-Wheeler line. Don’t forget Adam Lowry and Paul Statsny (if available) have been unsung heroes in their ability to successfully adapt to linemate and positional changes in the past three weeks, and the pieces are in place for a solid three lines that can produce offensively.

The Oilers, on the other hand, are not as balanced as the Jets. This is not a secret, but Leon Draisaitl and Conor McDavid are literally scoring machines. Draisaitl has popped 15 goals and added 16 assists for 31 points and McDavid has a mere 27 points (10G, 17A). But the next highest scorer is Ryan Nugent-Hopkins, who scored his first goal of the season on Sunday against the St. Louis Blues. Nugent-Hopkins has 18 points (1G, 17A), followed by Jesse Puljujarvi with 14 points (6G, 8A). Good numbers deserving of respect, but pretty much average top-six forward numbers across the league.

In fact, Draisaitl and McDavid’s 25 goals account for 43% of all Oilers’ goals, and if the Jets can manage these two players and keep them from scoring, the Jets have the advantage. I know… I said if!

Sometimes penalties have to be taken and sometimes they’re unavoidable. But sometimes, they’re from a lack of hustle, discipline, or intelligence. For the Jets to defeat the Oilers, staying out of the penalty box will be critical because the ridiculous offensive numbers become simply ludicrous. So if a Jets’ penalty is being called, it better be a good one.

If you compare the Jets’ offense to the Oilers’ scoring output, they are very similar… when they play 5-on-5! At even strength, the Oilers have scored 39 goals while the Jets have scored 34. The Oilers are averaging 33 shots per game and scoring on 13% of those shots, while the Jets are marginally behind at 30 shots and scoring on 11%. The Oilers started the season 5-0-0 and then lost to the Philadelphia Flyers at home, a game where the Flyers took only four penalties the entire game and only one after the first period. They played the Oilers at even strength for a vast majority of the game and it worked to their advantage in a 5-3 victory.

The Jets’ power play is producing at a respectable 23.7% which is the eighth best in the NHL, however, the Oilers have the top power play in the league at 41.9%. In 43 chances, they have scored 18 times while on the man advantage. Do you remember the aforementioned offensive machines the Oilers dress in Draisaitl and McDavid, the duo who are currently the top two scorers in the NHL? Those two? Well, they feed on the power play like a school of hungry piranha on an injured animal. They have scored 11 of the Oilers’ 18 PPG thus far and have earned 11 and 13 points, respectively, with the man advantage. Take those numbers out and it would reduce their totals to 20 and 14 points each in 5-on-5 situations. These are numbers the Jets can handle.

This all leads to the biggest disparity in the teams when not playing at even strength. The Oilers have the NHL’s best power play, and the Jets currently possess the NHL’s third worse penalty-kill numbers. The Oilers kill 88.1% of their penalties which is second amongst all teams, while the Jets kill 65.8% of their penalties, the 29th best in the league. That’s a disadvantage the Jets may not be able to handle. You think the piranha can smell that blood?

The Jets and their balanced offense and strong goaltending are very capable of taking some points off the Oilers in the net two games, but it’s going to have to be from playing at even strength where the teams match up evenly. As soon as there are penalties involved, it usually goes well for the Oilers.

Keith Forsyth is a freelance writer and sports junkie from rural Manitoba who is covering the Winnipeg Jets for The Hockey Writers.  Keith loves all sports and is a huge fan of the NFL (Skol Vikings… if you know, you know) and the Montreal Expos (they’re coming back… you watch!). He recently retired from the education world teaching high school, where his greatest passion was coaching young athletes.  He brings that same logical, behind the bench type of approach to you as he delivers an insightful look into the NHL and specifically the Jets.  For interview requests or content info, follow Keith on Twitter or his social media accounts.  They appear under his photo on articles like this one.