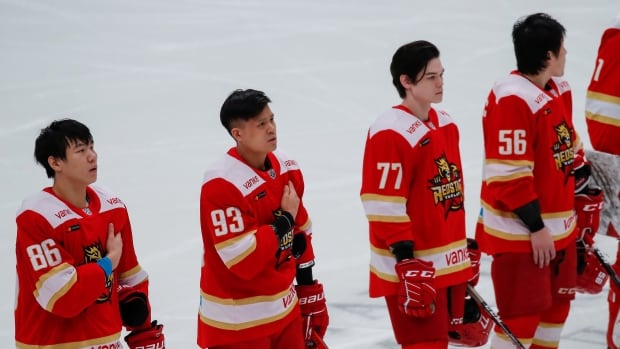 The president of the International Ice Hockey Federation is warning that China’s men’s ice hockey team could be pulled from the Beijing Olympics because it is not competitive enough and would be beaten badly if forced to face off against powerhouse teams like the United States and Canada, which will be stacked with NHL stars.

Luc Tardif, president of the IHFF, made the comments to Reuters in Toronto on Tuesday, adding that the Norwegian hockey team is ready to be added to the Olympic tournament if China is pulled out.

A final decision is expected Nov. 25.

The IIHF refused an interview with CBC, but its recent comments contradict a statement issued on Nov. 2 that China was a “confirmed” participant in the Olympic tournament and that the hockey federation wasn’t going to remove the team.

It’s the latest round of uncertainty for the Chinese hockey squad. As the host of the next Olympics, China has been granted the right to field a squad in the 12-team tournament, but it has struggled to ice a competitive one.

“I don’t see any solutions,” said Dave King, who has coached hockey teams in the Olympics, the NHL and the Kontinental Hockey League (KHL), which mostly consists of teams from Russia, along with other eastern European countries and now China.

King said if China, which is currently ranked 32nd in the world, is replaced with Norway, it’s not much better.

“It is still going to be a huge situation with possibilities for embarrassment.”

Officials with the IIHF are in Moscow this week analyzing China’s prospects by watching Beijing’s Kunlun Red Star play two KHL games and evaluating which of the more than 20 foreign players on the team are eligible to compete at the Olympics.

Kunlun Red Star was originally based in China, but moved to a suburb of Moscow in 2020 because COVID-19 restrictions made it too difficult to remain in Beijing and keep playing in the KHL.

The team, which was founded in 2016, is near the bottom of the KHL standings. The majority of its players — 19, in fact — are Canadian and have been recruited by China to help bolster its hockey talent and form the backbone of the country’s national team.

Many, like 21-year-old goaltender Paris O’Brien, who is from Coquitlam, B.C., have Chinese heritage and say it is an honour to play for a country developing its hockey program.

“It is pretty surreal,” he said. ”It is like we are introducing hockey to China and helping develop the game and let the fans show how we play and what hockey is all about.”

When Kunlun Red Star faced off against Amur, a team from Russia’s far east, on Tuesday night, the 7,000-seat Mytishchi Arena near Moscow was mostly empty.

A few dozen fans were on hand and most were cheering for Amur, but sitting behind one of the goals was a cluster of Kunlun supporters. Two teenagers waving a Chinese flag and a Kunlun banner told CBC they were cheering for China because someone “suggested” they should.

Another man, who said his nickname was Lenin because he resembled the former Soviet revolutionary leader, said he is a big supporter of China and communism, so he thought he should support the country’s hockey team.

“We thank the Canadians for teaching them how to play,” said Alexander Rubinkov, the Lenin lookalike, who was watching the game with his family.

Also watching was a row of Chinese players wearing Kunlun jackets who were not in the lineup that night. Looking down from the skyboxes were officials with the IIHF.

Kunlun, which at one point in the game was down 4-0, rallied back to send it into overtime, but ended up losing. The team has lost 75 per cent of its games this season.

Afterwards, CBC requested to speak with Canadian players on the team and were granted permission, but told not to ask anything about the Olympics.

The players themselves, however, brought it up, saying it was the ultimate goal.

“We just have to hopefully get some more wins before that,” said Ethan Werek, 30, a forward from Goodwood, Ont., who said that the team has great coaching and support but has underachieved so far this year.

He said it would be huge exposure for China to play on the world stage and could help further develop its hockey program.

While observers say China has made huge strides at the youth level, the Olympics came too early for its senior team, which faced a series of obstacles, including mismanagement and the COVID-19 pandemic.

Mark Dreyer, a Beijing-based writer who publishes a site called China Sports Insider, has been following the team since 2017. He said at one point, the Kunlun franchise “fell out” with China’s Ice Hockey Association, and various people have been responsible for developing the national team over the years.

It has rotated through general managers and coaching staff. Three former coaches, including Canadian Steve Kasper, a former NHL player who coached the Boston Bruins for two seasons, launched a lawsuit against Kunlun for over a million U.S. dollars in unpaid compensation.

WATCH | How Canadians ended up on a hockey team that risks being pulled from Olympics:

Ahead of hosting the 2022 Beijing Winter Olympics, China is building a men’s hockey team stacked with Canadians who have Chinese heritage, but a former NHL coach says embarrassment is more likely than Olympic glory. 2:31

Given that China doesn’t have enough senior players to field a team, it has relied on foreign imports. But due to the pandemic, a few of the players haven’t competed for China long enough to be eligible for a spot on its Olympic team.

The IIHF requires players to compete for two consecutive seasons in their new country, but Dreyer thinks the federation has no choice but to grant Canadian players eligibility.

“I don’t think anyone is going to quibble. It is not like you are drafting a [Connor] McDavid or a [Sidney] Crosby and they don’t meet the eligibility requirements,” Dreyer said.

But one looming issue revolves around passports and Chinese citizenship. China doesn’t recognize dual citizens, so in order for foreign players to obtain a Chinese passport, they might be required to forfeit, even temporarily, their Canadian or American one.

Dreyer said if the national team does play in the Olympics, he doesn’t expect the games to be shown on prime time in China, and noted that there has been very little coverage of the team in Chinese media.

Dreyer said back in 2018, the IIHF debated whether to give the Chinese team an automatic berth, and suggested the federation is likely regretting that decision now.

“I think at this point [the players] have to do the best they can, and hope that the NHL all-stars [they play against] kind of take their foot off the gas.”

But Dave King said it is very difficult for a coach to ask his players to take it easy on a weaker team, and goal differential could be used as a tiebreaker to determine which team advances through to Olympic qualification.

King, who was general manager of Japan’s hockey team leading up to the Nagano Olympics in 1998, said that back then, the hockey tournament was structured differently, where lower-ranked teams faced off against each other in an initial preliminary round.

Japan played in a group against Belarus, France and Germany first before playing and winning against Austria and securing 13th place. (At that time, the Olympic tournament contained 14 teams.)

King said it is too late to structure something like that for the upcoming Beijing Games, adding that he feels for the Kunlun players.

“They are keen and fit and they work real hard,” he said. ”But the level of competition is just so high.”