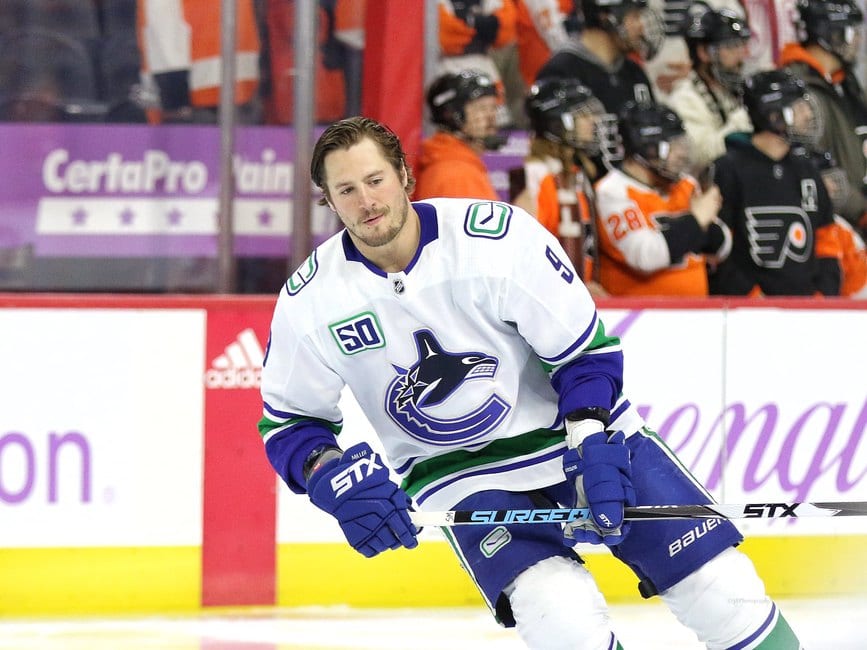 Being a Vancouver Canucks’ fan is difficult right now. Change needs to happen on the ice, but at the same time, not many people want general manager Jim Benning making any trades due to his poor history. Some trades could benefit the Canucks if they want to declare the season a bust officially. Here are five of them.

J.T. Miller to the Detroit Red Wings for Jared McIsaac, Jonathan Berggren and a 2022 Second Round Pick (Higher Selection)

If the Canucks want to make a big splash and shake up this roster, the player traded will most likely be J.T. Miller. At 28, he doesn’t fall into the young cores age group and can bring back the most value of any player 27 or older. Sending him back east where he can be close to his hometown may be the best option, especially if the Canucks want to have the cap room to sign Brock Boeser this coming offseason.

The Red Wings need center depth. They are currently playing with Pius Suter down the middle and are just a few injuries away from having Sam Gagner be their second-line center. Bringing in Miller would allow Detroit to build the center depth behind Dylan Larkin and make them a more balanced team. They also do need some help on the penalty kill, which Miller can provide. Yes, they would be giving up some good prospects in Jared McIssac and Jonathan Berggren, but with the strides the team has made this season, they could be a difficult out in the playoffs if they improve their center depth.

This trade would be painful for Canuck fans as Tyler Motte has become a fan favourite over the past few seasons. His crowning moment came in the 2020 bubble, where his consistent play and openness with his mental health struggles led fans to become attached to the Michigan-born forward. This included a podcast called The Broadscast selling “Motte Girl Summer” shirts that helped raise money for mental health initiatives in British Columbia and Michigan. Since then, he has kept up his strong play, and now that he is an unrestricted free agent at the end of the season, it may be time for the Canucks to cash in on his strong play.

The New Jersey Devils are struggling on the penalty kill, which is one of Motte’s strong points. They are currently operating at 76% and have given up 12 power-play goals in their first 14 games. The penalty kill is a crucial part that needs to be fixed if the Devils have their eyes set on the postseason. They also need help in the bottom six at 5v5 as their normal fourth line of Jimmy Vesey, Micahel Michael McLeod, and Yegor Sharangovich have yet to score a goal. Motte is cheap, can improve the depth on this team and should be considered as a trade option for the Devils.

A player like Justin Dowling can help out any team’s bottom-six forward group with his ability to play with speed and not take penalties. He can be used to help shut down the opposition if needed while also providing some offensive capabilities. With a low cap hit for this season and next, he could be a good option for a team like the Rangers, who are looking to solidify their bottom-six with some veteran experience.

Overall, the New York Rangers are a good team. The one weakness they do have, though, is generating offence from their fourth line. The line of Ryan Reeves, Dryden Hunt and Kevin Rooney have been outscored two to zero in around 67 minutes of play together and are being hemmed in their own zone frequently. A player like Dowling could help elevate the fourth line and make them more of an offensive threat in the future.

Related: Canucks Getting the Depth They Wanted From Dowling

Jaroslav Halák has been good for the Canucks, but it does not make sense for them to keep him with the way the season is going. Vancouver already has a goalie in Michael DiPietro who is ready to be an NHL backup, so why not allow him to learn the game from the bench this season. If the Lightning can sort out their cap issues, this could be a win-win for both teams.

The reason the Lightning make sense as a trade partner is because of their current backup situation. This season, Brian Elliott has struggled through two starts and may not be the most reliable option if Andrei Vasilevskiy goes down with an injury. At least with Halák, the Lightning know they have a goaltender who can hold down the fort and has some recent playoff success.

Brad Hunt is an experienced NHL defenceman who can play both sides of the ice and fill in on a third pairing in a pinch. This move would bring back a draft pick and free up a spot for Jack Rathbone to be an everyday NHLer. The team that makes the most sense as they need that defensive depth is the Philadelphia Flyers.

The Flyers have a good blueline, but they do not have any solid options to fill in for a short stretch of games when an injury hits. Currently, Nick Seeler is filling in, but only on an emergency loan. Like Tampa Bay, they will need to manage the cap a little to bring in Hunt’s $800,000 cap hit, but that should not be a significant hurdle. Having depth on the blue line is key to any successful season, and if the Flyers want to make a run at the playoffs, a guy like Hunt could help them out.

Now is the Time For the Canucks to Sell

At this point, the only way the Canucks are making the playoffs is if they go on a run like the St. Louis Blues did in 2018-19. Vancouver needs to ensure they get something back for their players, unlike in past years where their pending unrestricted free agents were held onto despite interest from around the league. As mentioned, though, the problem is do Canuck fans trust Benning to make these deals. Regardless of who is in charge, change needs to occur, and trading is the best option available.

Adam is excited to be joining The Hockey Writers as part of the Seattle Kraken and Vancouver Canucks team. His work can also be found at dubnetwork.ca where he covers the Vancouver Giants of the Western Hockey League.