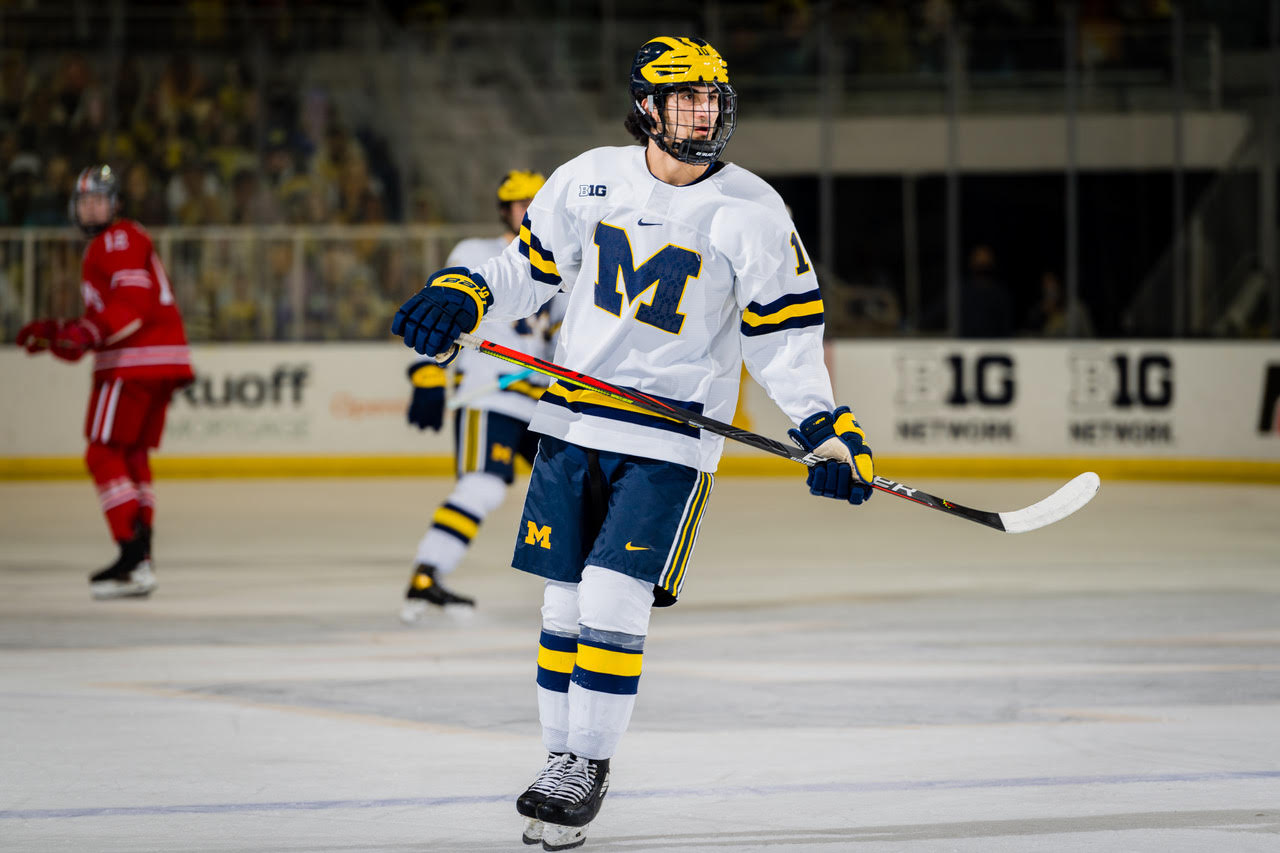 In this edition of Seattle Kraken News & Rumors, forward prospect Matty Beniers is named first star of the week in Big Ten Hockey, general manager Ron Francis comments on the team’s early-season struggles and goaltender Philipp Grubauer prepares for his 13th start of the season.

The Kraken’s second-overall pick in the 2021 NHL Entry Draft is already proving himself worthy of his high selection, earning first star of the week honors for a second-consecutive week after scoring both game-winning goals for the Michigan Wolverines in a sweep of the Penn State Nittany Lions. His two goals against Penn State on Thursday came after back-to-back two-goal performances against the Michigan State Spartans, making him the first Wolverine to score two goals in three-straight games since Kraken assistant general manager Jason Botterill in 1997.

The 19-year-old center is off to an incredible start in his sophomore season, and first as Michigan’s assistant captain, with 15 points (nine goals, six assists) in 12 games. He’s expected to make his NHL debut with the Kraken next season and is likely to be a key player for the franchise to build around. Keep an eye on him in the NCAA this season as he continues to build a stellar campaign with a star-studded Michigan roster. After back-to-back weeks as Big Ten Hockey’s first star, expect him to remain among the conference’s top talents going forward.

Francis Says Kraken Have “Found a Way to Lose” Early On

Francis entered the Kraken’s inaugural season with high hopes the team would be competitive right from the get-go. Building around strong goaltending and defense, the team was expected to be a force in its defensive zone by limiting opponents’ scoring chances and having reliable puck-stopping when all else failed. Despite the team’s never-quit and high-intensity play style, Francis’ strategy is not going to plan out 15 games into Year 1.

The Kraken sit last place in the Pacific Division with a 4-10-1 record and have the sixth-worst goals differential in the NHL at minus-13. With four losses in a row, things need to turn around fast if Seattle hopes to remain competitive this season.

“We felt that goaltending and defense would give us a chance in each game,” Francis told The Seattle Times. “And then the question was scoring, and can we score enough or not? I think we certainly felt going into the season that we would be a competitive team.

“I think we’ve had some games from the start of the season where I’ve felt we found a way to lose rather than gain a point or two. And when you give up six or eight of those points, you’re in a different situation than you’re sitting in now.” (from ‘GM Ron Francis says Kraken have ‘found a way to lose’ too often in disappointing start to season,’ The Seattle Times, 11/15/2021)

The Kraken’s next four games are all at home against the Chicago Blackhawks, Colorado Avalanche, Washington Capitals and Carolina Hurricanes. Obviously, Seattle is up against some tough competition, but if the team can find it’s game in the crease and on defense, the season could be saved. Seattle is nine points back of a wild card spot with 67 games left to play, so there is still time to right the ship.

Grubauer to Make 13th Start of the Season on Wednesday

Grubauer will make his 13th start in 16 games when the Kraken host the Blackhawks on Wednesday. He is tied for sixth-most starts in the league and has 679:37 of time on ice. His .880 save percentage (SV%) is the lowest among NHL goaltenders with at least five games played this season, but head coach Dave Hakstol is sticking with him in net following a three-day break since the Kraken’s 4-2 loss to the Minnesota Wild on Saturday.

The 29-year old is making an unprecedented number of starts for his career. Last season, he made a career-high 39 starts and was a Vezina Trophy finalist with a .922 SV% and 1.95 goals against average (GAA). After Wednesday’s game against the Blackhawks, he will have started in 13 of the Kraken’s 16 games so far. This raises a very important question—is Hakstol overplaying Grubauer?

The Kraken’s other highly-touted goalie, Chris Driedger, went down with a lower-body injury early in the season, but was activated off the injured reserve on Nov. 2. Since then, he has only made one start. The 27-year-old recorded an impressive .927 SV% in 23 starts with the Florida Panthers last year, but has only seen playing time in two Kraken games so far. Grubauer and Driedger were initially expected to be one of the top goaltending duos in the league, splitting starts in a 1A/1B fashion. It has not gone that way at all. Hakstol is sticking to his guns and hoping Grubauer can turn things around.

The Kraken look to end a four-game losing streak when it faces off against the Blackhawks on Wednesday at 7 p.m. PT. Chicago ranks just one point above Seattle with a 4-9-2 record (10 points). If the Kraken pull out a win, it will give the team an extra boost heading into the final three games of its homestead against some very tough competition.

Tom Pepper writes about the Seattle Kraken from a fan perspective. He began his hockey writing career with THW in June 2020, working as a Buffalo Sabres journalist during the 2020-21 season. He also spent time as a FanSided site expert and covered his childhood team, the St. Louis Blues. In June 2021, he devoted himself to the Kraken (pre-expansion draft) and started writing from a fan perspective full-time at THW. He’s been a diehard Kraken fan ever since. In addition to writing, he hosts the THW What’s Kraken show on iHeartRadio. Follow him on Twitter at @TomPepper.