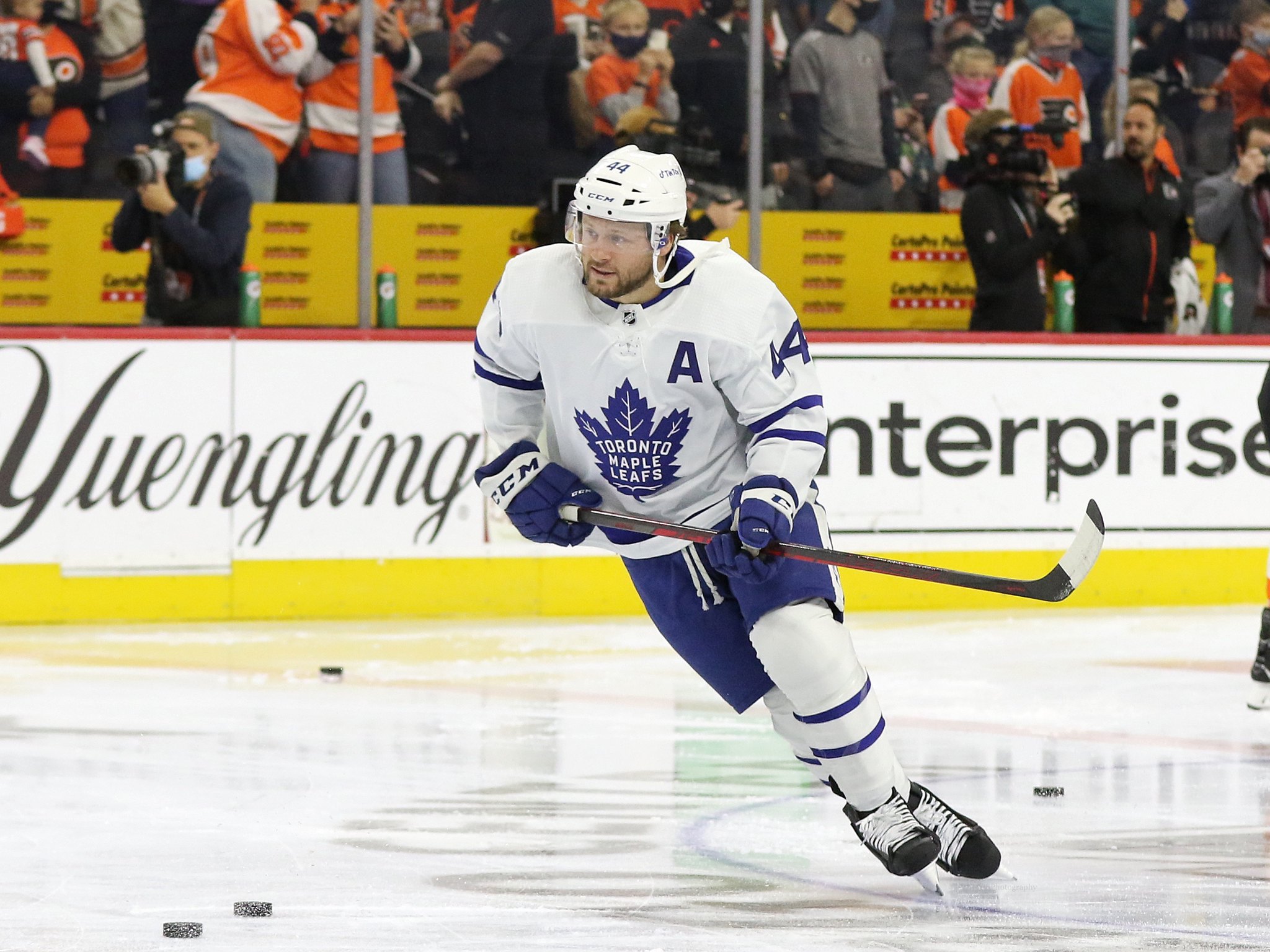 The Toronto Maple Leafs moved their winning streak to five games last night when they beat a talented New York Rangers team by a score of 2-1. That victory stopped the Rangers’ own winning streak at four games and pushed the Maple Leafs’ season’s record to 12-5-1.

After the game, I watched the highlights again from a New York feed and the Rangers’ broadcasters were praising the Maple Leafs’ team effort. One noted, “You have to give it to the Leafs; they aren’t giving up much.” Those kinds of comments have to make Maple Leafs’ head coach Sheldon Keefe pleased.

In fact, Keefe was pleased. He noted after the game: “I thought we were calm throughout and did a really good job. Against a team with that level of skill that they have, you’re going to have to rely on your goaltender to make some saves. But I didn’t think we gave up much today, in terms of odd-man rushes and such.”

Item One: Ilya Mikheyev Back Skating at Practice

There’s good news on the ​​Ilya Mikheyev broken-thumb front. It was reported that the young Russian had skated on Thursday and had worked out with a lighter puck on his stick during practice. After a strong preseason camp, Mikheyev broke his thumb during the preseason. At that time, his healing and rehab were projected to extend to two months. So it seems he’s on track to return to the team next month.

I suppose that, although everyone on the team is happy with the team’s current winning streak and successful play, Timothy Liljegren might be less happy than most because he didn’t play. For the game last night, he sat as a healthy scratch. He was joined in the press box by Kirill Semyonov, who might have played except that Ondrej Kase elected to play even though he was banged from an injury he suffered when he blocked a shot against the Nashville Predators.

Item Three: You Can Knock Ondrej Kase Down, But You Can’t Keep Him Out

Speaking about Ondrej Kase, yet again he was a game-time decision for the Rangers; and, yet again, he suited up and played. Kase missed Wednesday’s practice to rest after he blocked a shot late during Tuesday’s win over the Predators. Kase took the team’s optional morning skate yesterday and then declared himself good to play.

Kase and his childhood best friend David Kampf have become mainstays of the team’s defense. In addition, Kase has scored six points in the 18 games he’s played this season.

Jack Campbell started Thursday’s Rangers’ game having won in his last three starts. He pushed that number to four wins in a row by stopping every shot but one that the Rangers threw at him during the 2-1 win. He was solid throughout the entire game.

The team’s defense in front of him made his task easier during the first part of the game; however, when his work got harder during the third period, he was there to make the difficult stops. Campbell, on the season, has a 10-3-1 record with a strong goals-against-average of 1.63 and a stellar save percentage of .944. Both those numbers lead the NHL. He’s also tied for NHL wins on the season with 10, the same number as his old teammate Frederik Andersen.

Morgan Rielly scored the only two goals his team needed in their 2-1 win. It was the fourth two-goal game of his NHL career. In addition, he logged over 25 minutes of ice time. Since his eight-year, $60 million contract extension in late October, Rielly’s been proving he’s worth the added money.

The 27-year-old defenseman is now on a three-game point-scoring streak (posting five points in those games) and has scored 13 points (three goals and 10 assists) in 18 games this season.

The Maple Leafs meet the Pittsburgh Penguins on Saturday night. It will be their last home game before a stop against the Islanders in New York and then a west-coast road trip. The Penguins are coming off a 6-0 rout of the Montreal Canadiens and look to win two in a row from the Maple Leafs.

Related: Maple Leafs’ Ondrej Kase Is at a Career Crossroads

The Penguins’ game in Pittsburgh had to be the low point of the team’s season. Shortly after, the team came back strong to beat the Chicago Blackhawks and then soon started their winning streak. I’m looking for a strong game to end the homestand.

It would be nice to see Nick Ritchie score a goal. He did push hard last night in some of the game action I saw. It’s time.