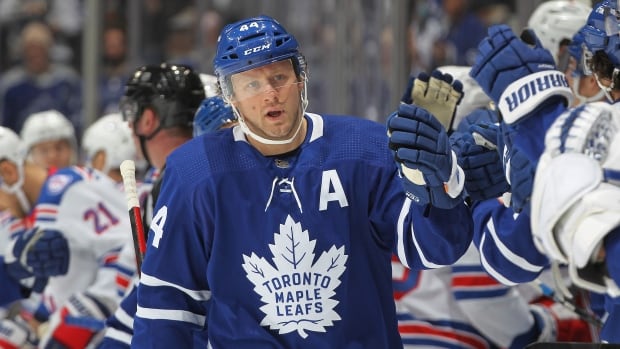 Igor Shesterkin had the Maple Leafs’ number the last time he stepped on Scotiabank Arena ice.

Morgan Rielly and his teammates found an answer exactly a month later.

The defenceman scored twice and Jack Campbell was solid again with 27 saves as red-hot Toronto hung on late to beat New York 2-1 for its 10th win in the last 11 games.

The Leafs (12-5-1) played another tight contest on the heels of Tuesday’s 3-0 shutout of the Nashville Predators.

A team stacked with offensive firepower, but also with a history of leaky defensive zone coverage and loose neutral zone play, Toronto is all of a sudden comfortable locking things down.

“It’s a mindset,” Rielly said following the fourth two-goal game of his NHL career. “That’s half the battle in most things, if not more than that. Once you get it in your mind that you’re gonna play a certain way, and you’re just not going to give up chances against, the rest follows.

Morgan Rielly scores both Toronto goals as Leafs down Rangers

Leafs head coach Sheldon Keefe said his forwards and defencemen are much more connected compared to the team’s 2-4-1 start.

“A lot of guys early in the season, they’re trying to jump start your season offensively looking to get going,” he said. “That tends to change your mindset a little bit.

“It took us a little bit to get to this place.”

New York came in with four straight victories, and had earned points in eight of nine (6-2-1), but were unable to generate much of an attack until the third period.

“We gave ourselves a chance to at least get a point,” Rangers centre Mika Zibanejad said. “That’s how it goes sometimes.”

The Leafs have now won five straight, and are 10-1-0 since an ugly four-game slide that raised plenty of questions about the team’s makeup, direction and desire.

Since then, Toronto has responded with arguably its best hockey of Keefe’s tenure.

“We’re comfortable in these [close] games,” said Toronto centre Auston Matthews, who set up Rielly’s second goal. “We’ve had a lot of them lately. When the third period comes around, we’re trying to stay within our structure. Tonight, we let them get rolling around a little bit more than we’d like.

“But [Campbell’s] just incredible for us … just standing on his head.”

Shesterkin, who was lights out in making 40 saves in New York’s 2-1 overtime victory in Toronto on Oct. 18, made a nice blocker stop on Jason Spezza early in the first period off a turnover, but the Leafs would push ahead moments later.

Rielly took a pass from Wayne Simmonds at the point and snapped a quick one-timer on Shesterkin with Michael Bunting providing a screen for the blue-liner’s second goal of the season at 3:41.

Slow out of the gate, the Rangers started to get going as the period wore on, with Campbell stopping Filip Chytil at the lip of Toronto’s crease.

Matthews tested Shesterkin on a couple of chances midway through the second before Campbell denied Julien Gauthier.

“He had another couple of big saves out there,” Campbell said of battling his opposite number. “[Shesterkin] got me last time. As a team, we wanted to get him back.”

Toronto got its first power play a few minutes later, and after Campbell snagged Kevin Rooney’s chance on a 2-on-1 break shorthanded, the Leafs capitalized on the man advantage for the 10th time their last 10 games.

Rielly took a pass from Matthews at the left point and had acres of space before toe-dragging around Rangers defenceman Jacob Trouba and firing his third — and third in four outings — at 10:59.

“Really nice patience,” said Matthews, before adding with a grin: “I don’t know if he meant to go there, but it worked out.”

“I’m not confirming anything,” Rielly shot back playfully when informed of Matthews’ assessment.

Campbell, who won his 50th NHL game two nights after making his 100th appearance, didn’t have a lot to do up to that point, but was sharp on an Artemi Panarin effort late in the period to keep the home side up 2-0 heading to the third.

“He’s been phenomenal,” Rielly said of Campbell, who leads the NHL in save percentage and goals-against average. “He just goes about his business. He’s just stopping everything … you just want to leave him alone.

“He’s like a starting pitcher — you let him do his thing.”

The Rangers broke the shutout bid at 3:30 of the third when Hunt banged home a loose puck after Kaapo Kakko’s initial shot went off linemate Ryan Strome in front.

New York continued to press, prompting Keefe to use his timeout in an attempt to steady Toronto’s bench.

“They were really pushing,” he said in explaining the decision. “We’ve played in these situations a lot, but just sitting there as a coach … you’re gonna feel pretty terrible if they tie the game and you haven’t done anything.”

“It’s just nice to get a deep breath,” Matthews added of his coach’s message. “No panic, just get back out there.”

Panarin had another chance on a breakaway eight minutes into the third, but Campbell was there to shut the door.

The Leafs came within centimetres of going up 3-1 with seven minutes to go only to have the puck cleared off Shesterkin’s goal line on a mad scramble.

The Rangers continued to force the issue as the clock ticked down with the ice now heavily tilted.

Campbell, however, was there at every turn — including a big pad stop on Chris Kreider and a glove save on Trouba to keep Toronto’s win streak alive.

“You look at the elite teams … they’re closing games,” Campbell said. “They got one on us tonight.

“But we found a way to get the win and get a big two points.”