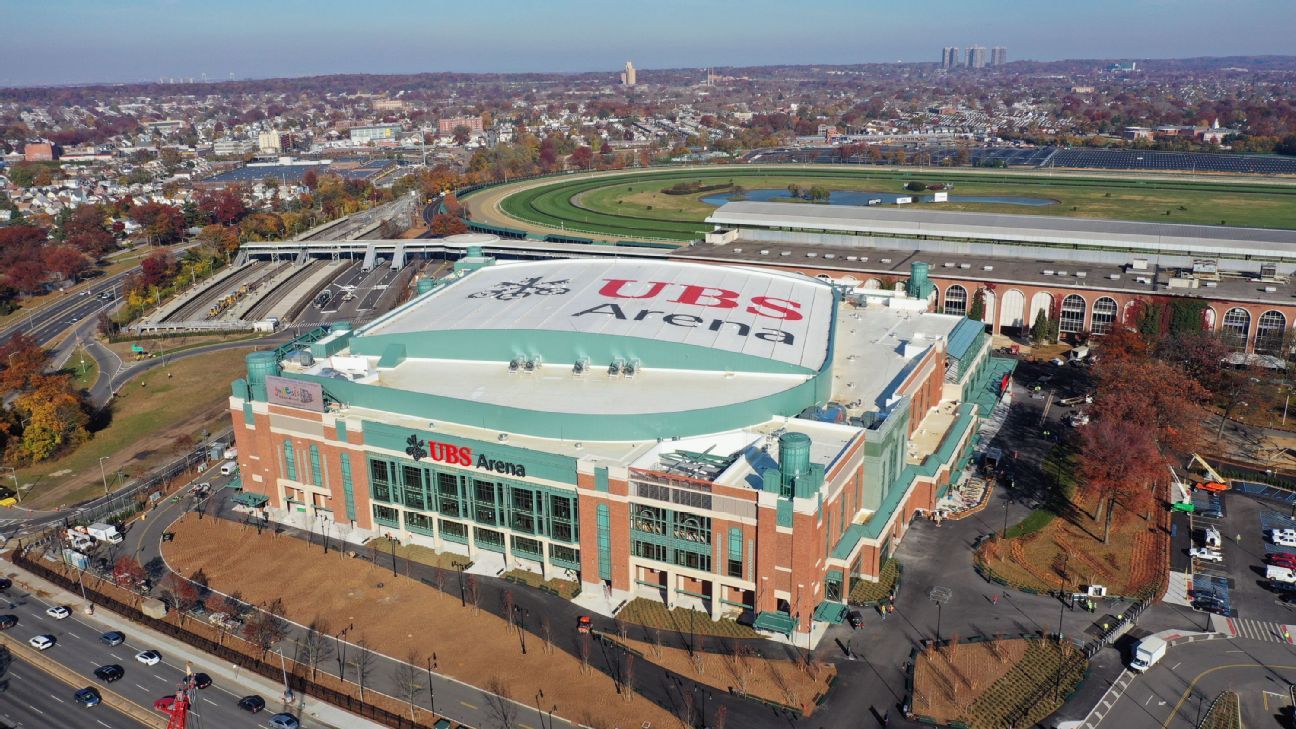 The wait is finally over for the New York Islanders and their fans.

After starting the season with 13 straight games on the road, the Islanders (5-6-2) hit the ice for their first game at the new UBS Arena in Elmont, New York. They host the Calgary Flames on Saturday, Nov. 20, as the $1.1 billion state-of-the-art building opens its doors to hockey fans.

“I know we have been looking forward to this for a long time and I know the fans have. I’m excited for everyone to get in here and see a game and really enjoy this all together,” said captain Anders Lee.

UBS Arena is designed to hold around 17,250 fans for NHL games. Many of them will enter with a skeptical eye — after all, it’s replacing Nassau Coliseum as the team’s home, an old hockey barn that fans treat with religious reverence. But the new home for the Islanders has a lot going for it. Here are eight unique innovations and features of UBS Arena:

With due respect to the good people at UBS, “the arena at Belmont Park” has been shorthand for the Islanders’ new barn for years, as the iconic New York track that hosts an annual Triple Crown race is located right next to the new facility. The Islanders have incorporated Belmont’s look into the arena’s design, as its red brick and arched windows carry over the scenery at the racetrack. There’s also an outdoor bar terrace that overlooks the grassy paddock area at the track.

“Everything that you see at the UBS Arena is designed to fit into the historic facade of the Belmont Park racetrack,” said Tim Leiweke, CEO of Oak View Group, the firm that’s overseeing construction of the arena. “[NHL commissioner] Gary Bettman’s fondest dream is to have a Stanley Cup game in the afternoon, and then have the Belmont Stakes after it.”

An endearing quality of the Nassau Coliseum was how close everyone felt to the action, and how the sounds of the game were never lost because it wasn’t a cavernous building. In an effort to replicate that at UBS Arena, the Islanders hung the roof just three feet higher than the one at Nassau to contain the noise. The highest deck in the arena only has nine rows, and the official “upper deck” is split in two to make it seem smaller.

One aspect of Islanders fandom that doesn’t get a lot of notice: That supporters are spread far beyond Long Island. The fan Meetup organization for the team has chapters in such disparate places as Raleigh, Las Vegas, the U.K. and Brazil.

Now they have a place inside UBS Arena. The Islanders worked with Isles Meetups to have the logos of these fan groups included on the wall above the Tailgate bar. The team worked with the fan organization to secure logos for each fan group, in a partnership that’s spanned a few seasons.

While the arena was built with the fans in mind, Islanders president of hockey operations Lou Lamoriello also helped design aspects of the new barn. He was a driving force behind making the Islanders’ locker room resemble that of their practice facility. He helped guide efforts on the arena’s ice quality and air flow. He also suggested improvements to the areas of the arena designated for players’ partners and children.

The @NYIslanders have a new home 🙌@Buccigross and Islanders LW @mattymarts17 sat down to discuss the grand opening of UBS Arena this Saturday. pic.twitter.com/lbp8QRBe6H

UBS Arena knows its audience. Islanders fans will have upwards of 10 different bars from which to imbibe in the building, from high-end spots for premium ticket holders to a 100-foot long “tailgate bar” where fans can socialize.

One spot in the arena worth noting specifically: Offside Tavern, an Islanders-centric bar in Manhattan that shuttered due to the COVID pandemic, is being resurrected as one of the bars inside UBS Arena, complete with a view of the ice.

“It’s indescribable. To be recognized as a part of the culture, to be in the building with them, is just crazy,” said owner Nick Costa.

It won’t totally be ready when the building opens, but UBS Arena will have a couple of innovations to get Islanders fans to and from the game more easily. The Islanders contributed over $50 million to the cost of the first new Long Island Railroad station in nearly 50 years. The eastbound side of the new LIRR station in Elmont will be open for the home opener, but full service will begin next summer when the westbound platform opens. The team anticipates 20-30% of its fans to arrive for games via rail.

The arena’s parking garage isn’t expected to be open until next March, but it will be one of the first entertainment venues to offer license plate recognition technology in the parking garage on site. Fans pull a ticket and then can pay via QR code to bypass lines at pay stations on the way out.

Just look at it 🤤 pic.twitter.com/hAwSZ5ox9Z

UBS Arena has partnered with New York state’s Taste NY initiative to source 75% of its food ingredients from a 300-mile radius. Like other arenas, it has a plethora of local vendors selling food inside the building.

Unlike other arenas, UBS will have “The Islander.” It’s the kind of food that fills your stomach as you describe it: a collaboration between Blue Line Deli & Bagels and Shaquille O’Neal’s Big Chicken Shaq that features a Buffalo chicken sandwich with cream cheese and bleu cheese, served on their iconic blue and orange bagel.

It might be heavier than a Ryan Pulock slap shot, and it certainly looks unique.

It’s the little things that matter when you’re attending a sporting event — especially one that doesn’t offer any breaks in the action to take care of some important business, outside of between periods. UBS Arena will have 68 guest-facing restrooms throughout the arena, 12 of which will accommodate families. UBS Arena will also have “the largest number of women’s restrooms among all NHL venues,” according to the team, which is no doubt fantastic news for those who have ever gotten in that line during intermission.

Most importantly, the bathrooms should be able to handle the fan capacity: The Islanders had employees participate in a coordinated flush around the building to ensure that the pipes could handle the flow.

The building is ready. The fans are ready. And the Islanders are excited.

“The entire facility and the rink are so high-end. I can’t even tell you how nice it is down here. We are a lucky group,” said center Mathew Barzal after his first practice at the rink on Thursday.