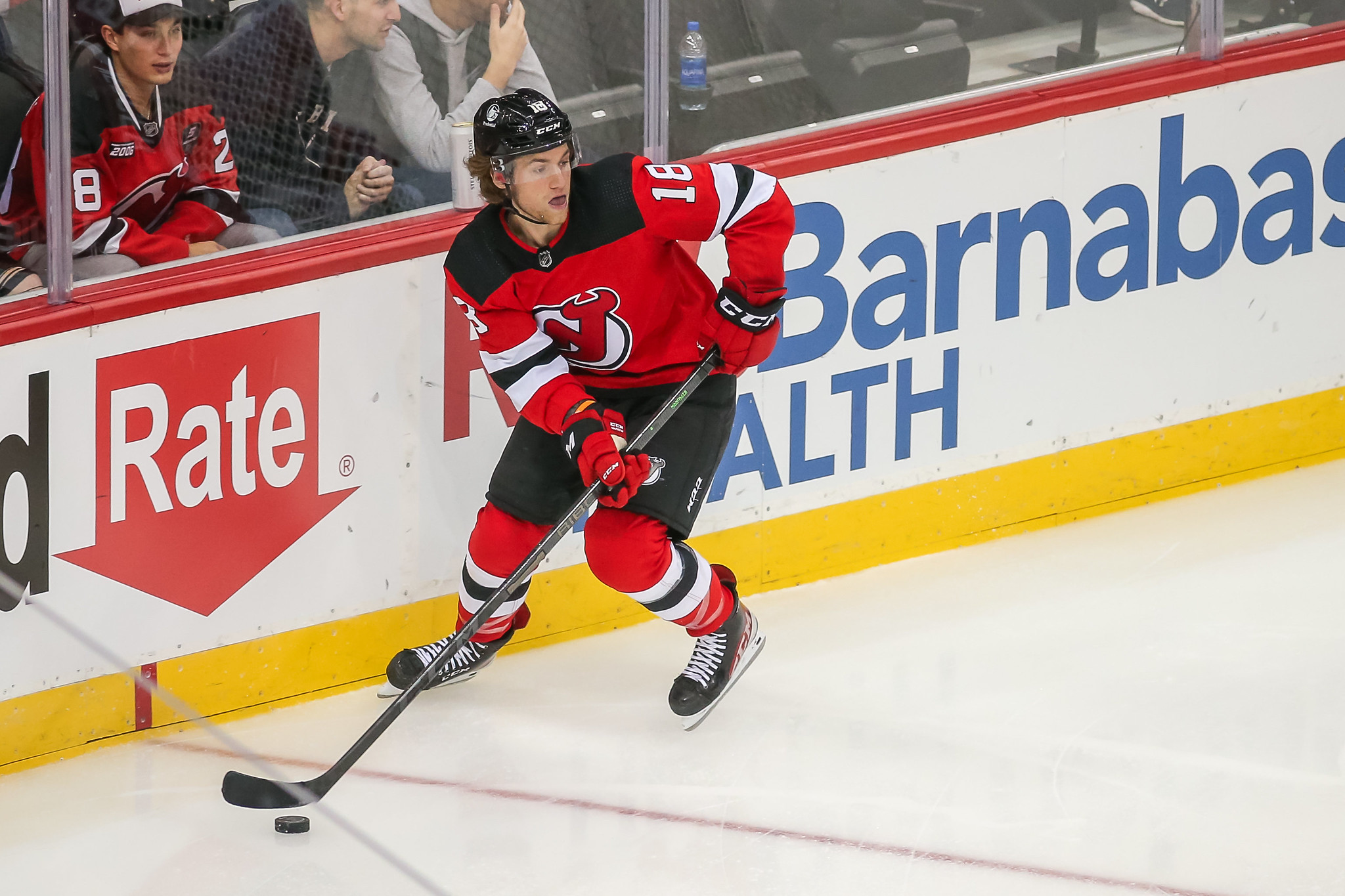 Welcome to the first ever New Jersey Devils internal power ranking, where we take a look at who’s hot and who’s not following every few weeks of play. What’s important to remember is that these rankings aren’t about overall individual value, but reflect how the player has performed in recent weeks as compared to his teammates. Like a stock, player ratings will rise and fall with every update. For example, while Andreas Johnsson may not be one of the Devils’ most valuable players overall, his outstanding play so far this season has catapulted him to one of the top spots on the board.

Every few weeks, a power ranking of the entire Devils roster will be released with analysis for a selection of the biggest movers during the month. As this was the first month of play in the NHL, there obviously won’t be any movers yet. Instead, we’ll set the baseline for the season based on how each Devil has performed thus far and analyze the top five, plus a couple of summarizing notes. Without further ado, let’s get to the rankings!

No, Nico Hischier doesn’t lead the team in points or anything flashy like that, but he immediately became the Devils’ most important forward once Jack Hughes went down with a shoulder injury that could last more than a month. The captain has assumed top center duties in Hughes’ stead and has not disappointed.

Five of Nico’s seven assists in this young season have been primary helpers, and while the goal scoring isn’t there yet (two goals), his team-leading unblocked high-danger shot attempts and second-highest expected goals percentage suggests that more production is on the way. The defense has been there as well considering his solid faceoff percentage of about 55 percent and 14 takeaways while taking the most shifts on the entire roster.

The prize of NHL free agency this past offseason has impressed through 15 games, though he’s only played in 12 of them. Still, Dougie Hamilton is finding a way to do a little bit of everything for the Devils as the team has finally found themselves a top-tier defenseman that can effect both ends of the ice.

Related: Former Devil Jamie Langenbrunner: Where is He Now?

Just ahead of Ryan Graves in average time on ice (ATOI) at 21:57, Hamilton has nearly replicated his defensive partner’s blocks and hits in three fewer games while putting up five goals and five assists. He’s also doing his part on the power play with four man-advantage points and leads the team in shots on goal (47).

Once unthinkable following a dreadful 2020-21 season, Johnsson finds himself as the Devils’ co-leader in points and one of the main reasons the team is surviving the monumental loss of Hughes. An inflated shooting percentage might’ve indicated to some that the hot start to Johnsson’s season was a fluke, but evidence such as five primary assists and a team-leading 14 penalty minutes drawn indicates that his production is predicated on more than luck.

Furthermore, Johnsson’s chemistry with linemates Jesper Bratt and Dawson Mercer has been one of the brightest spots of the season. Speaking of which…

The young center in Mercer has been nothing short of a revelation through the first month of the season as he’s tied for the lead in team points with 11 and has emerged as an early contender for the Calder Trophy.

Numbers aside, Mercer has been a real treat to watch as he uses his incredible skating and playmaking abilities to drive the New Jersey offense. As evidenced by his magnificent spinning (and blind) cross-crease pass that resulted in a Bratt goal against the Boston Bruins last week, Mercer has the raw ability and IQ needed to thrive at this level. He doesn’t seem to be slowing down.

Is the Pavel Zacha of last season — and the Zacha who the Devils thought they were getting when they drafted him sixth overall in 2015 — actually here to stay? Early on, it would appear so as the late-blooming forward has continued potting goals — he leads the team with seven.

The 2020-21 season saw Zacha score 17 times in 50 games, and he’s on pace for a whole lot more than that in this current campaign. Drafted at just 18 years old, it feels like he has been with the team forever. In reality, he’s only 24 and might’ve just needed a bit of extra time to become the goal scorer he was projected to be.

The Rest of the Pack

After breaking down the Devils’ top five, let’s take a look at how the rest of the roster ranks:

Please note: Players on the injured reserve will not be included in power rankings. American Hockey League (AHL) call ups with minimal or no experience will automatically start at the bottom of the rankings until they produce at the NHL level.

Holtz and Boqvist Off to Slow Starts

In limited ice time this season, two of the Devils’ more exciting young players have struggled to produce. Players like Mercer who thrive immediately in the NHL are the exception to the rule, and there’s no reason to panic about Alexander Holtz and Jesper Boqvist so far, especially considering they’ve only played in five games each. What is exciting was their tremendous play in the AHL for the Utica Comets before being called up. Boqvist had eight points in seven games while Holtz scored an impressive five goals in four matches. We’ll see if some more big league experience will result in a bump up in the rankings next time around.

Tatar, Vesey, and McLeod Find Themselves in Unlikely Spots

One of the biggest early season disappointments has been the play of Tomas Tatar, who just can’t seem to find a production streak and has missed a couple of golden opportunities to score as of late. The silver lining is that he’s at least been in position to do some damage, and an uptick in points should be expected from the veteran.

On the opposite end of the spectrum, Michael McLeod and Jimmy Vesey have been ranked relatively highly for “grinder-type” forwards. Their offensive numbers may not be up there, but the situational value these two have provided thus far has been excellent. This is especially true for McLeod, who has become somewhat of the go-to center for important draws — he holds an impressive 59.5 faceoff win percentage. Vesey, who was signed after impressing on a professional tryout, has provided energy consistently and even has more points (five) than Janne Kuokkanen and Yegor Sharangovich do.

These next few weeks will be big for the Devils as they try to get usually reliable players like Sharangovich and Tatar back on track. It’ll also be an important pocket of time for the youngest Devils, who will either sink or learn to swim at the NHL level. By the next power ranking, it should be pretty clear which route they took. Of course, the team is awaiting the return of Hughes, whose presence alone will dramatically alter this list. Hopefully, the young center returns quickly to give this group a huge boost that’s surely needed in the competitive Metropolitan Division.

Vincent Velotta is an NYC based freelance journalist who covers the New Jersey Devils for The Hockey Writers. He has covered sports and entertainment for a variety of outlets including the Village Voice, Minute Media, and more.