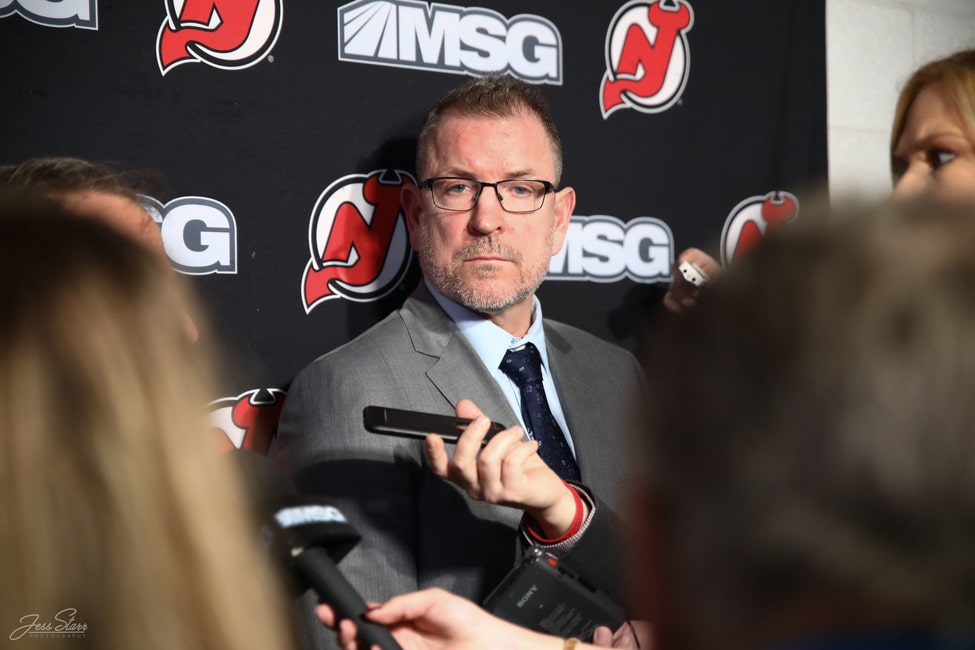 The daily “NHL Talk” column is your go-to for quotes from players, coaches, managers, and more. Also, listen to THW contributors talk hockey every weekday on The Hockey Writers Podcast, available on iHeartRadio and wherever you listen to podcasts.

In this edition of NHL Talk, the Nashville Predators, New Jersey Devils, and Ottawa Senators have the best quotes from around the league.

On Monday, the NHL announced that country music stars Miranda Lambert and Dierks Bentley will headline the 2022 Stadium Series at Nissan Stadium in Nashville, Tenn. on Feb. 26. The Predators host the Tampa Bay Lightning in what will be Nashville’s second outdoor game and Tampa Bay’s first.

“We are thrilled to have two of the biggest names in country music join us in Nashville for the Navy Federal Credit Union NHL Stadium Series,” NHL chief content officer and senior executive vice president Steve Mayer said. “Miranda and Dierks are not only two musical superstars but also hockey fans that represent the strong bond that has formed between the Predators and the country music community.

Nashville, commonly referred to as Music City, seems to have found the perfect pair to put on a great show off the ice, while the Predators and Lightning battle it out on the ice.

“The NHL Stadium Series will celebrate Nashville’s transformation into a hockey town, the city’s country music roots and the Predators-Lightning’s growing rivalry,” Mayer said. “We expect this to be the first of many announcements to come.”

Devils GM Fitzgerald Not Settled on Roster Ahead of Trade Deadline

Devils general manager Tom Fitzgerald will likely be making some phone calls as this year’s NHL Trade Deadline on March 21 approaches. New Jersey ranks 28th in the NHL and last place in the Metropolitan Division, with a 15-25-5 record.

“We want to improve; you can never have enough good players at every position,” Fitzgerald said. “We have a few unrestricted free agents (including forward Jimmy Vesey and defenseman P.K. Subban). I haven’t talked to their agents; we’re still over a month away. The goal was to approach the trade deadline while fighting for a Stanley Cup Playoff spot.”

While the Devils’ playoff hopes aren’t completely dead, it seems very unlikely it will qualify for the postseason, sitting 20 points out of a wild card spot. Although New Jersey is struggling, it is seeing success from some of its youngsters expected to lead the future of the team, including rookie Jesper Bratt, who has 41 points (14 goals, 27 assists), and Jack Hughes, who has 27 points (12 goals, 15 assists) in 28 games.

“Is there a hockey trade you could make to not only help your team immediately, but the future?” Fitzgerald said. “Somebody in the age demographic of where we’re at with the core of our team. Is there a hockey trade that makes sense for us more long term, but can help jumpstart us now? We’re not settled on ‘we’re too good up the middle’ or ‘we’ve got some quality wingers’ or ‘we’ve got some good defensemen coming.’”

Brown Expected to Return to Senators’ Lineup On Monday

Senators forward Connor Brown will make his to return to the lineup when Ottawa hosts the New Jersey Devils on Monday. The 28-year-old is tied with Alex Formenton for sixth among Senators point-getters, with 19 points (5 goals, 14 assists) in 26 games. He missed the last 10 games with a broken jaw sustained during warmups on Jan. 13, a 4-1 win at the Calgary Flames that he played in.

“Connor’s one of our leading point-getters, but he’s also a guy that can play everywhere, can play on any line, can play at the end of periods,” Senators head coach D.J. Smith said. “It’ll help us tremendously.”

Ottawa has struggled without Brown, posting a measly 4-4-2 record during his recent time away. He is projected to suit up on the Senators’ second line with centre Nick Paul and left-wing Formenton in his return.

Tom Pepper hosts The Hockey Writers Podcast on iHeartRadio and wherever you listen to podcasts, every weekday (Monday to Friday). In addition, he writes the daily “NHL Talk” column and Buffalo Sabres gameday previews. He is a diehard Sabres fan in Toronto, frequently driving the Queen Elizabeth Way to cheer on his team at KeyBank Center.