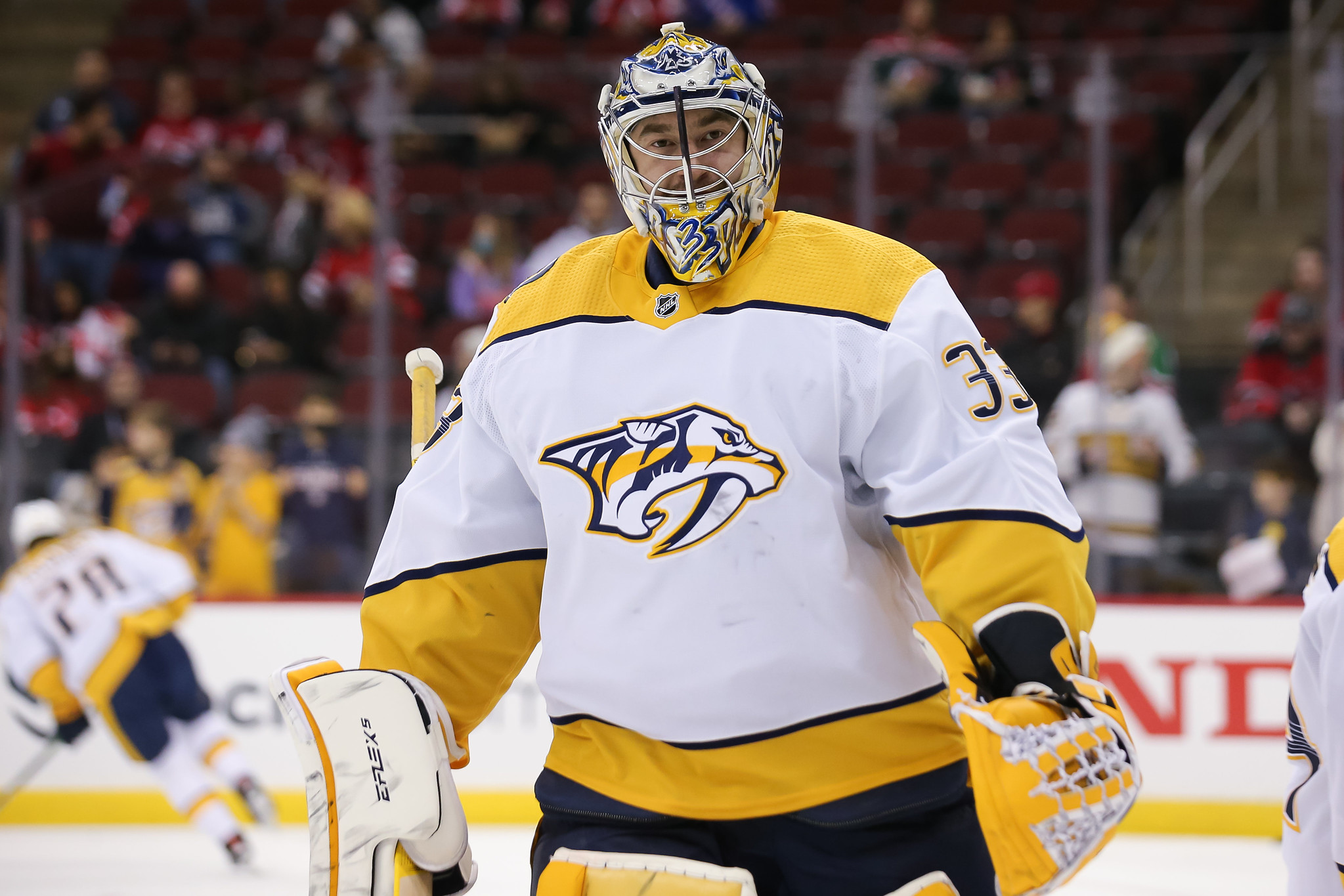 In this edition of NHL Recap, these are the top quotes from players and coaches following all games played on Feb. 22, 2022:

The Nashville Predators pulled off the upset, defeating the Florida Panthers, 6-4, on Tuesday. The Predators rode a four-game losing streak into the game, but managed to take down the Panthers and end its nine-game home winning streak.

Predators goaltender David Rittich: “For sure it’s great to get back on winning track and stop that losing streak. That’s huge.… The goal support the guys gave me and the blocked shots (18) were huge. So, I’m thinking this was a lot of good teamwork and a great effort.”

The Panthers lost just its fourth home game of the season, with a 23-4-0 record as the hosting team. Florida outshot the Predators, 48-33, but Nashville was relentless and ended up skating away with the game in the late stages of the third period.

Panthers head coach Andrew Brunette: “I liked a lot of things. I thought we attacked. I thought we had energy. I thought we played the way we wanted to play. We just got a little loose in certain areas.… It’s as simple that.”

The Columbus Blue Jackets got the win, 4-3 in overtime, in a back-and-forth game against the Toronto Maple Leafs on Tuesday. The two sides traded goals all game, with neither team holding more than a one-goal lead at any point, but Patrik Laine eventually broke through with the game-winning goal, 20 seconds into overtime.

Blue Jackets forward Patrik Laine: “I knew [Blue Jackets forward Jakub Voracek] wasn’t going to shoot his backhand from the blue line [in overtime]. He made a great play and gave me some room and I was able to get my shot off [for the game-winning goal].

The Maple Leafs’ struggles continued amid a three-game winless skid. After losing to its rival Montreal Canadiens, 5-2, the night prior, Toronto fell just short of getting back in the win column on Tuesday.

Maple Leafs forward Auston Matthews: “We’re leaving the rink a little bit sour, but I thought we did a lot of good things tonight.”

The Ottawa Senators ended a two-game winless skid with a 4-3 victory over the Minnesota Wild on Tuesday. After pulling out to a 2-0 lead in the first period, the Senators gave up two goals in the second period, but escaped the frame with a goal of its own to retake the lead, and then traded goals with the Wild in the third period.

Senators forward Brady Tkachuk: “That was some of the best hockey we’ve played in the first period. We played heavy, we played aggressive, you know, getting on them. That’s the type of game we want to play. Of course, we expected a pushback there in the second period from them. It was a fun game, an entertaining game, and we’re just happy with the outcome.”

The Wild were plagued by a slow start that put it down by two goals in the opening 20 minutes of play. Although Minnesota fought back from a two-goal deficit in the second period and one-goal deficit in the third period, the Senators kept getting a step ahead.

Wild head coach Dean Evason: “It’s more frustrating how we started. I mean, full credit to Ottawa. They played hard and right and heavy and smart and aggressive, real aggressive. They took the game away from us early, and we couldn’t catch up until the second period.… That team just continued to play the same way. We started wrong. They started right.”

The St. Louis Blues won its second consecutive game with a 4-1 victory over the Philadelphia Flyers on Tuesday. Blues goaltender Jordan Binnington saved 25 of 26 shots for a .962 save percentage (SV%) in his first start since Feb. 10, and first win since Jan. 9.

Blues goaltender Jordan Binnington: “It’s a tough league and it takes a lot of work, you can’t let your foot off the gas. You can’t just do enough to get by, you’ve got to do more. It’s tough when you feel you’re not doing your part for the team.… It just feels good to contribute tonight, and I’m just excited to keep working one day at a time and build it back. It happens in life. Stuff’s not going to go your way. You’ve got to just keep fighting. That’s the mindset, and it was fun to get a win with the boys.”

The Flyers’ winless skid hit six games in a row with another loss on Tuesday. Philadelphia tied the game up, 1-1, at 8:09 of the third period, but proceeded to allow three consecutive goals to the Blues to close out the night.

Flyers forward Claude Giroux: “I think we’re very frustrated. [We played] a good game tonight most of the time. Some lines played very well, but again in the third, we just couldn’t get it done.”

The Anaheim Ducks put together a two-game winning streak with a 4-3 shootout victory over the San Jose Sharks on Tuesday. Ducks forward Rickard Rakell led the way for Anaheim, scoring two goals in regulation, before firing home the shootout-clinching goal.

Ducks head coach Dallas Eakins: “After he got that first one, [Rakell] kept shooting the puck. He was really on his game, really engaged and very, very focused.”

The Sharks’ winless skid hit seven consecutive games with its latest loss on Tuesday. San Jose had plenty of opportunities, outshooting the Ducks, 43-29, but failed to convert on a lot of its best scoring chances.

The New York Islanders took down the Seattle Kraken, 5-2, on Tuesday. The Islanders scored four consecutive goals (two in the first period, two in the second period) to open the game and played strong through all 60 minutes, giving the Kraken minimal hope for a comeback.

The Kraken dropped its fifth-straight contest in regulation, the worst active losing streak in the NHL. Allowing the first four goals of the game doomed Seattle and sucked the energy out of the team as the game went on and time ran out.

Tom Pepper hosts The Hockey Writers Podcast on iHeartRadio and wherever you listen to podcasts, every weekday (Monday to Friday), and writes the “NHL Talk” and “NHL Recap” columns, every day. You can favourite and/or bookmark this page to stay up-to-date with Tom Pepper’s daily hockey content.