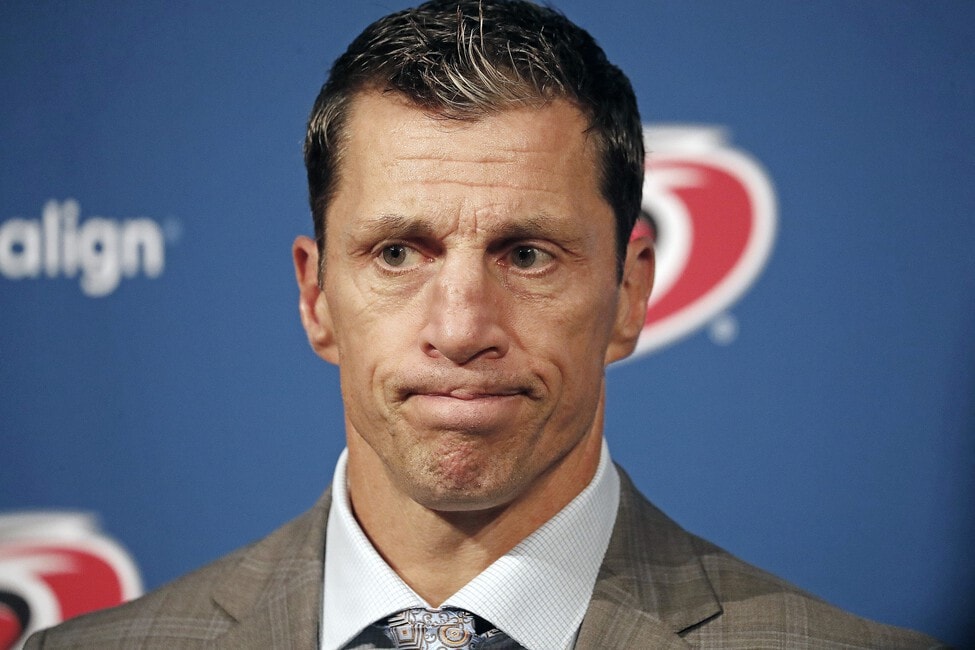 In this edition of NHL Recap, these are the top quotes from players and coaches following all games played on Feb. 25, 2022:

The Carolina Hurricanes were dominant in a 4-0 shutout victory over the Columbus Blue Jackets on Friday. The Blue Jackets entered the game tired, having defeated the Florida Panthers, 6-3, the night prior, and the Hurricanes took advantage.

Hurricanes head coach Rod Brind’Amour: “We know that they were flat tonight, so we took advantage of it. You have to do that. We played a solid game the whole game.”

The Blue Jackets were badly outshot 50-19 in its loss on Friday. Columbus was unable to keep up with the Hurricanes, who entered the game on a three-game winning streak, ultimately extending it to four games.

Blue Jackets head coach Brad Larsen: “I was really worried about tonight’s energy. As much as we invested in that game last night (6-3 win at Panthers), physically and emotionally, that was the big worry. Usually, we say we’re a half-step behind, but tonight I think we were a good full step behind.”

The St. Louis Blues returned home from a four-game road trip (3-0-1) to defeat the Buffalo Sabres, 5-3 on Friday. Despite the Blues being outshot 38-23, it managed to capitalize on more scoring chances than the Sabres.

Blues head coach Craig Berube: “The long road trip coming home, it takes a lot out of you. The energy was low [at practice] yesterday I thought, and today a little bit. That fed off into the game. It’s pretty normal I would say after a long road trip like that and come home. They know it’s one game, then we’re back on the road trip again. Guys are a little edgy, which is OK. They found a way to fight through it and win a hockey game, that’s all that matters.”

The Sabres opened the scoring at 1:25 of the first period but lost its only lead of the game at 7:06 of the same frame. The game was back-and-forth, but Buffalo couldn’t establish another lead, despite tying the game up twice (once in the second period, once in the third period).

Sabres forward Kyle Okposo: “We controlled a lot of the game. That’s just a good group over there. They’ve got a lot of guys who’ve been around a long time and they just stuck with their plan and they weathered the storm. They bent and didn’t break, and we just gave them a couple too many chances and they capitalized on them. But I thought that we were a better team for the majority of [the game].”

The Chicago Blackhawks won a thrilling 13-goal affair 8-5 over the New Jersey Devils on Friday. The Blackhawks’ win was its first victory at United Center following a seven-game skid at home.

Blackhawks head coach Derek King: “It was huge. That was real big. I think just for the fans. I mean, we’re competing, we’re trying and it just wasn’t working, and then it was an exciting game. Got the fans out of their seats. Great to see [Blackhawks goaltender Kevin Lankinen] hang in there and survive it and get us a win. We had contributions from a lot of bodies.”

The Devils kept the game close, but only led the game once, with a 2-1 advantage at the end of the first period. New Jersey was tired, coming off a 6-1 win over the Pittsburgh Penguins the night prior, which resulted in some sloppy plays that cost them the game.

Devils head coach Lindy Ruff: “We made mistakes you just can’t make. If you want to use the third period, we tie the game and give up the odd-numbered rushes. Back-to-back games where you know you’ve got some fatigue in your game, you’ve got to make them earn it, and we didn’t make them earn it.”

The Colorado Avalanche scored six consecutive goals to defeat the Winnipeg Jets 6-3 on Friday. After the Jets jumped out to an early 3-0 lead by the end of the first period, the Avalanche responded with three goals of its own in the second period and then added another three in the third.

Avalanche head coach Jared Bednar: “I know the score was bad, but our team had belief and felt like we could do it. Then power-play goal by [Avalanche forward Gabriel Landeskog], I think the power play had just expired, but that goal was a big goal to get us started. The way [Avalanche forward Nathan MacKinnon] was playing, I was just feeling like we were going to be able to do it. I think our room felt the same way.”

The Jets looked to be skating away with the game but failed to sustain pressure on the Avalanche through the final 40 minutes of play. Winnipeg was outshot 42-29 by the end of the night.

Jets forward Pierre-Luc Dubois: “I thought in the first what we did well was we stopped them, we get the puck and we go. And then in the second and third, you give them 40 shots from the outside, at some point one’s going to go in. I thought we just slowed it down and tried to find perfect plays. They’re tough to play against. The more you sit back, the more they get opportunities and they just feed off that.”

The Arizona Coyotes took down the Vegas Golden Knights 3-1 on Friday. After the Golden Knights opened the scoring at 11:03 of the second period, the Coyotes tied it up 1-1 at 14:16 of the same frame before scoring another two goals in the third period.

Coyotes head coach Andre Tourigny: “I thought we were a heavy team, we hit hard, we battled hard we pressed hard along the boards and made it tough to play against us. In the first, we were trading scoring chances, but we made adjustments and the guys did a fantastic job to adjust and to tighten it up.”

The Golden Knights outshot the Coyotes 44-32 but had trouble beating Arizona goaltender Scott Wedgewood. Vegas was also significantly outworked physically with just 17 hits in response to the Coyotes’ 41.

Golden Knights head coach Pete DeBoer: “For me, the story of the game was we played well enough defensively, our goalie was good enough to win it, but we got one goal tonight, from our fourth line.”

The Los Angeles Kings won the latest edition of the Freeway Face-Off, defeating the Anaheim Ducks, 4-1. The Kings’ win over its local rival marked its fourth win in a row and moved it up to second place in the Pacific Division.

Kings forward Adrian Kempe: “For the rest of the season now, every game is going to be huge and every point we can get is going to be big. We can’t relax now. We’re in a good spot right now and we need to keep that. We can’t fall off like we’ve done previously.”

The Ducks struggled to capitalize on opportunities, only scoring its lone goal of the game at 2:12 of the third period after the Kings already held a 4-0 lead. It was a disappointing effort from Anaheim, who entered the game on a two-game winning streak.

Ducks defenseman Kevin Shattenkirk: “We just didn’t have the compete level and the intensity that we needed. It’s embarrassing.”

Tom Pepper hosts The Hockey Writers Podcast on iHeartRadio and wherever you listen to podcasts, every weekday (Monday to Friday). In addition, he writes the daily “NHL Talk” and “NHL Recap” columns. Follow the podcast on your favourite audio streaming app and bookmark this page to stay up-to-date with Tom Pepper’s daily hockey content.