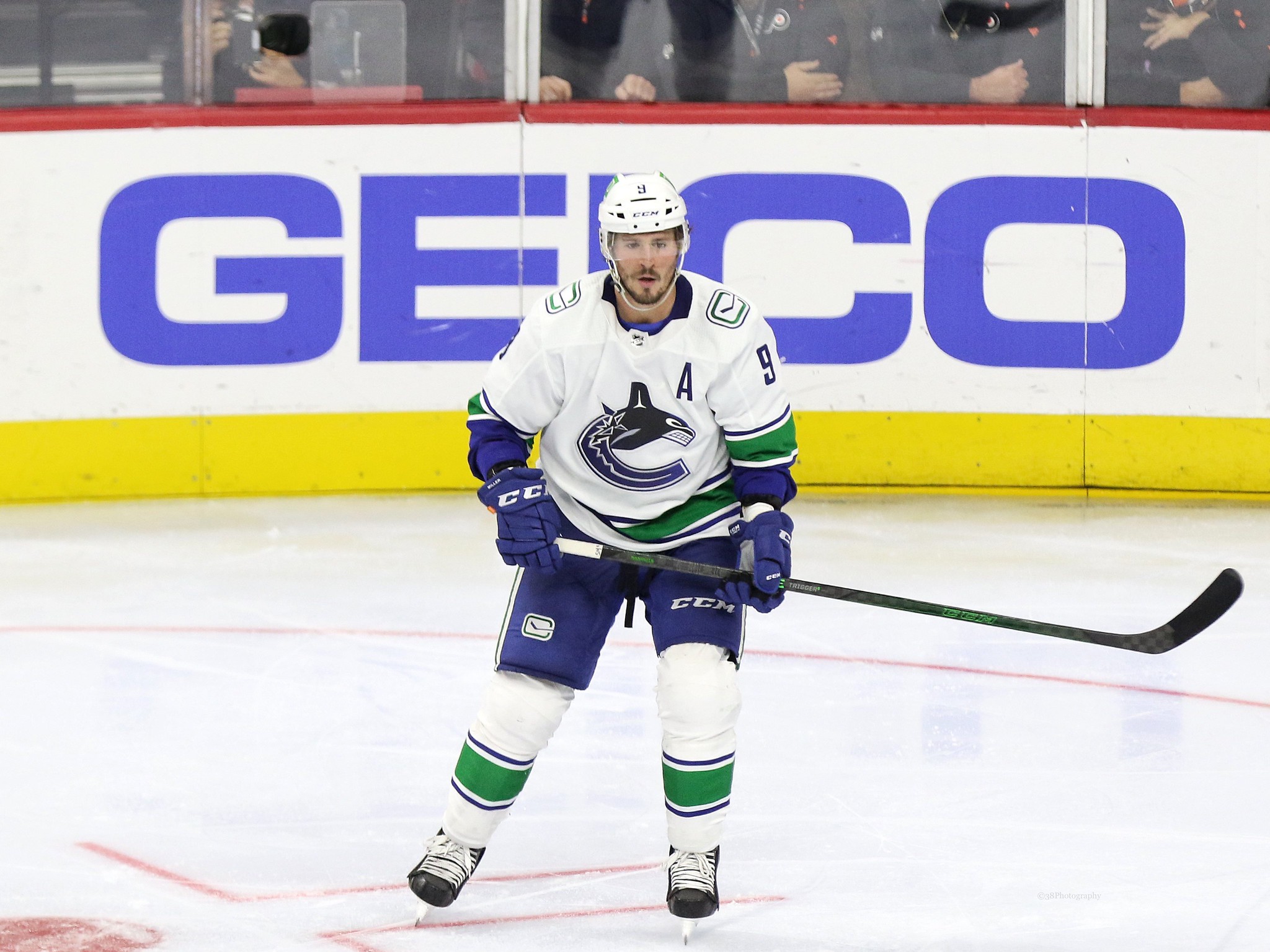 In this edition of NHL Recap, these are the top quotes from players and coaches following all games played on Feb. 24, 2022:

The New Jersey Devils scored the first four goals of the game to run away with a 6-1 victory over the Pittsburgh Penguins on Thursday. The Devils were already up, 3-0, at 6:44 of the first period and gave the Penguins no chance at a comeback.

Devils head coach Lindy Ruff: “[The Penguins] were going to try to get back in the game. But I thought the answer to that late in the [second] period and all third period was that we settled that down to get back into position. We won more battles. I thought, eventually, we took some of their life away.”

The Penguins lost its third consecutive game, unable to make a strong pushback following the Devils’ quick start. New Jersey beat Pittsburgh in the early stages of the game, which put the Penguins behind from the very start.

Penguins forward Sidney Crosby: “It starts with a good start, that would go a long way. We’ve been chasing games here the last few. It hasn’t turned out great for us. So, I think if we just start there and try to put a few periods together, we just have to be better. We’re not playing the way we’re capable of.”

The Toronto Maple Leafs ended its three-game winless skid with a 3-1 win over the Minnesota Wild on Thursday. The Maple Leafs only trailed for 27 seconds in the game, with the Wild opening the scoring at 8:37 of the second period, and the Maple Leafs responding just seconds later and then adding a pair of goals in the third period.

Maple Leafs forward Auston Matthews: “I just thought we stuck through with it for a full 60 minutes. There wasn’t a whole lot going on out there offensively for both teams, it was a pretty structured game. I thought [Maple Leafs goaltender Petr] Mrazek made some pretty incredible saves tonight when we had breakdowns and we capitalized on a couple chances. So, it was nice to get back in the win column, we just want to keep this moving and going.”

The Wild have dropped its last two games, but still sit third place in the Central Division. Minnesota looked sluggish on Thursday and had an abysmal faceoff win percentage of just 30 percent, which contributed to its latest loss.

Wild head coach Dean Evason: “We didn’t have a lot of energy. It was that type of game anyway, but it just didn’t seem like our normal energy, and we’re trying to figure out obviously why…. It didn’t look like we had that same jump we normally do. Our offensive zone, we didn’t have a lot of sustained stuff down there. We didn’t find pucks, get to pucks really quickly, so we’ll try to figure it out.”

The Columbus Blue Jackets won its fourth consecutive game with a 6-3 victory over the Florida Panthers on Thursday. Although the Blue Jackets entered the contest as underdogs, it put together a great performance and capitalized on its scoring chances to defeat the Panthers.

Blue Jackets head coach Brad Larsen: “I just loved how we competed from the opening shift. I thought they kept their poise. That was a total team effort. This team has been a handful for us, and coming in here and keeping this thing going was great.”

The Panthers lost its second game in a row, with both losses coming as its fourth and fifth losses at home this season. Florida outshot the Blue Jackets, 42-28, but struggled to find the back of the net and defend against Columbus’ relentless effort.

Panthers defenseman MacKenzie Weegar: “It’s not going to be all sunshine and rainbows and all that stuff. Losing might be a good thing for our team. We’re going to face adversity at times throughout the year, and this is one of them.”

The New York Rangers took down the Washington Capitals, 4-1, on Thursday. Despite being outshot, 37-21, the Rangers got contributions from throughout its lineup, including goaltender Igor Shesterkin, who saved 36 of 37 shots for a .973 save percentage (SV%).

Rangers head coach Gerard Gallant: “It was a good, solid team effort. It wasn’t one of those games where there was a lot of chances both ways. We had some good chances, and we took advantage and buried our chances.”

The Capitals got a lot of pucks on net, but only found the back of the net with 1:02 remaining in the third period. Washington struggled to solve the Rangers on Thursday, in the latest matchup between the Metropolitan Division rivals.

Capitals defenseman Nick Jensen: “Maybe they got the bounces and we didn’t, but it’s a battle at the net-front, and I think tonight it’s something they kind of outdid us in a little bit.”

The Nashville Predators won its second game in a row, following a four-game losing skid, with a 2-1 shootout win over the Dallas Stars on Thursday. Predators rookie forward Philip Tomasino scored the only goal for Nashville at 11:56 of the first period.

Predators forward Philip Tomasino: “[Predators forward Colton Sissons] drove the net there in the middle and kind of took that [defenseman] with him,” Tomasino said. “I don’t think without him doing that play, I don’t think that goal happens…. It worked out. It was kind of a flutterball shot a little bit, but I think I placed it pretty well. It was definitely a nice goal for me, and I think it was a nice goal for our team to get started.”

The Stars came up just short of earning two points in the standings on Thursday. Dallas outshot the Predators, 28-20, but only got one puck into Nashville’s net through three regulation periods, overtime, and a four-round shootout.

Stars head coach Rick Bowness: “We deserved two. We outplayed them. [Predators] goalie [Juuse Saros] was the difference in the game. I thought we played our hearts out tonight. I was very happy with everything…. The power play could have won us the game clearly, but our penalty killers were great tonight (5-for-5). Five-on-five we were very good. We didn’t give them any opportunities.”

The Vancouver Canucks played spoiler with a 7-1 victory over the Calgary Flames on Thursday. The Canucks were put to the test against the Flames, who entered the night on a 10-game winning streak, but managed to take control of the game and find the back of the net seven times.

Canucks forward J.T. Miller: “We just set a standard for ourselves for the rest of the year. Not by winning by six goals, but playing the right way, being sharp on the special teams, being ready to start the game. We have a standard. We need to play to that from here on out. We shouldn’t be satisfied with anything other than that, really.”

The Flames did not look like its normal self on Thursday, blown out in a game that would have set the franchise’s longest winning streak in history. Calgary allowed five goals to the Canucks in the second period, which doomed it for the remainder of the game.

Flames head coach Darryl Sutter: “Five-on-five the first two periods were really good. Took two dumb penalties that cost us, and missed like two or three breakaways or Grade A’s in the first period. Give the other team credit, they had a lot of energy and lot of skill.”

The Boston Bruins extended its winning streak to three games with a 3-2 overtime win over the Seattle Kraken on Thursday. The Bruins outshot the Kraken, 39-27, ultimately winning the game 33 seconds into overtime with a sharp-angle goal by forward Jake DeBrusk.

Bruins head coach Bruce Cassidy: “[DeBrusk] had his legs tonight, he was hard on pucks, and obviously attacked on the overtime goal down on the forward-side recognition. He earned his minutes (18:46). Really nice job for us. Really good job. That’s what Jake can do. He can score goals. He showed it on the first one going to the net, but more so the last one just waiting the goalie out.”

The Kraken’s winless streak hit six games with its loss on Thursday. Seattle opened the game’s scoring at 3:29 of the first period, but lost what would be its only lead of the night at 17:33 of the same frame.

Kraken head coach Dave Hakstol: “We played our [behinds] off tonight for 60 minutes. Tough way to lose a hockey game, but I’m proud of our effort. That’s not the best form to start with. We were shorthanded too much, but our penalty kill did fine with that, our goaltender (Philipp Grubauer) did fine with that…. His game tonight started with the penalty kills. He was sound, solid, and made a couple of big saves.”

The San Jose Sharks put an end to its seven-game winless skid with a 4-3 shootout win over the New York Islanders on Thursday. While the Sharks were outshot, 47-28, it managed to hang on until the shootout, where forward Logan Couture score the lone goal.

Sharks defenseman Jacob Middleton: “Everyone stepped up really well. Nice to win one too. Really nice. This is the first time I’ve heard music after [in the dressing room] in seven games and I couldn’t be happier.”

The Islanders played a great game, but fell short of earning two points in the standings. New York scored at 16:50 of the third period to send the game into overtime, and eventually a shootout, where it couldn’t solve Sharks goaltender James Reimer.

Islanders head coach Barry Trotz: “It may have been our best game of the year, and we didn’t get the two points, but we deserved the two points. We can walk away from games like this, and if you play to that level every night you’ll get a lot of points.”

Tom Pepper hosts The Hockey Writers Podcast on iHeartRadio and wherever you listen to podcasts, every weekday (Monday to Friday). In addition, he writes the daily “NHL Talk” and “NHL Recap” columns. Follow the podcast on your favourite audio streaming app and bookmark this page to stay up-to-date with Tom Pepper’s daily hockey content.