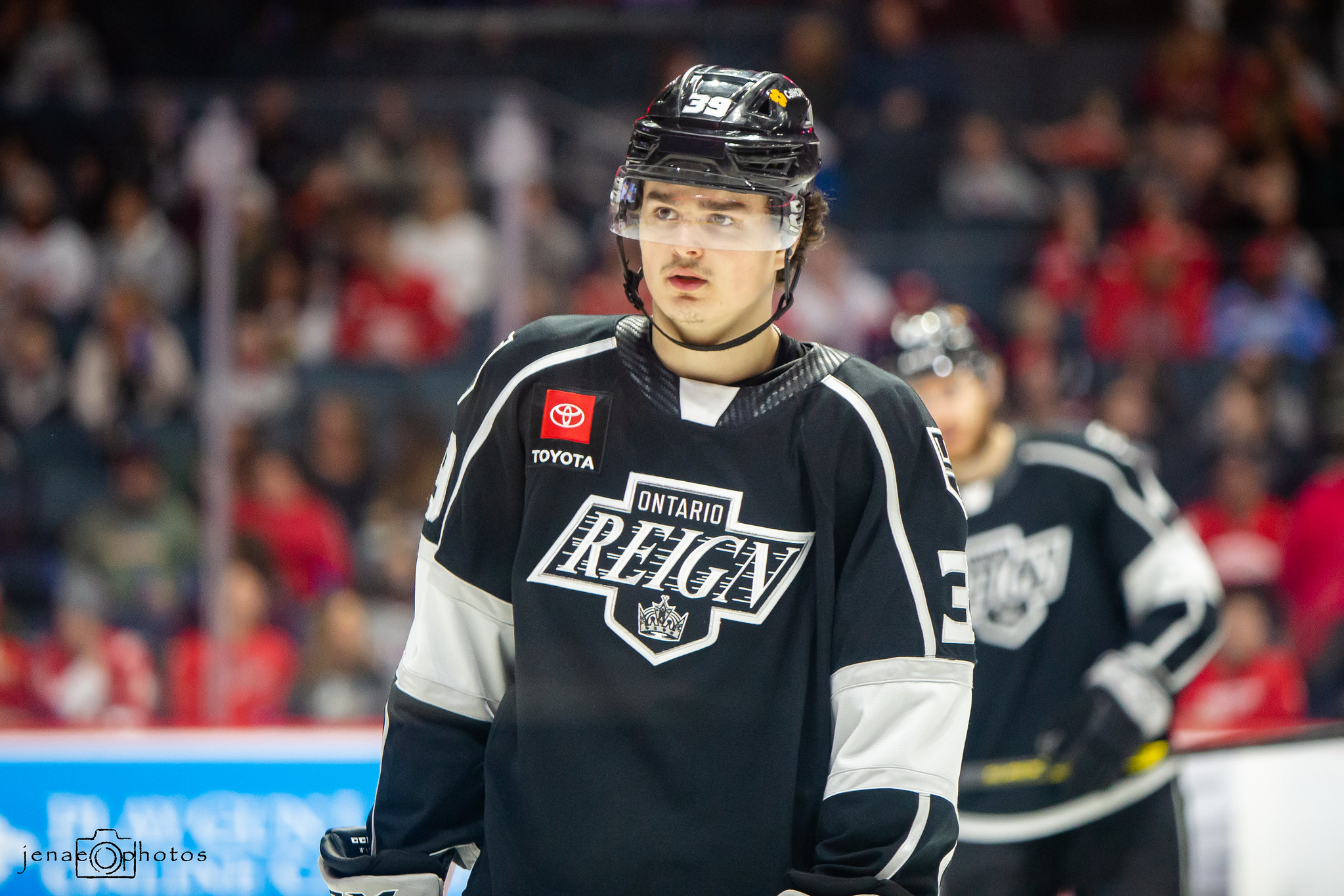 In this edition of Los Angeles Kings news & rumors, I’ll be discussing Alex Turcotte, some new signings for the Ontario Reign, and Sean Durzi’s future.

Since his draft season, Turcotte has dealt with a laundry list of injuries. He played significantly fewer games than his US National Team Development Program (USNTDP) teammates in 2018-19, but his stellar production in the games that he did play and his well-developed 200-foot games saw him drafted fifth overall. Since that season, the injuries have continued to pile up. He missed seven games in his Freshman year of college, eight games in his first year of pro hockey, and has missed 21 games this season and that number will continue to rise.

While the smaller number of missing games before this season doesn’t seem devastating, having to come in and out of the lineup, especially in your first season on a new team and in a new league, is extremely difficult. It becomes nearly impossible to develop chemistry and find consistency within the lineup. Despite these setbacks, Turcotte has continued to produce at a solid rate. In his Freshman year at college, he posted just under a point per game (PPG), scored at a .66 PPG pace in his first season of pro with his 21 points placing him seventh amongst under-20 players in the American Hockey League (AHL), and is scoring at a similar pace this season.

It’s also worth noting that, when he’s able to string a run of consecutive games together, with no injury setbacks, his production increases. For example, he had eight points in eight games before his injury, after returning to the team from the Kings. His play hasn’t been the issue, it’s been his health. Regardless of the reasons why his development has been stunted, it has, and fans are understandably frustrated by this. I would have to imagine the organization is as well, not at Turcotte, but certainly at the situation, and there will likely be questions raised about his future soon.

There’s no doubt in my mind that the Kings still love Turcotte as a prospect and are still confident in him developing into an impact player, as am I, but we know tough decisions are coming in the future. The team will almost certainly make the playoffs this season, and reports suggest that they want to make a big splash over the summer, giving them a great chance to compete in the playoffs next season. While not ideal, Turcotte could be a victim of this. Even if he develops into an impact player, it won’t be next season and might still be three to four years away. I question if the Kings want to wait that long if they feel they can package him in a deal that improves the team now.

It could be difficult to trade Turcotte now, as his draft stock is now at an all-time low, but he would still hold good value in the market as a former fifth overall pick. It doesn’t help him that the team has prospects to burn, and players like Rasmus Kupari and Gabe Vilardi are proving to be useful players since their recall. Add in players like Jaret Anderson-Dolan, Samuel Fagemo, and Tyler Madden who are all having good season’s in the AHL, and Turcotte might look more expendable. I’m not saying Turcotte will, or even should be traded this summer, but he is certainly more expendable than he would have been even 12 months ago. It would be a shame to see Turcotte’s time with the Kings finish, after never seeing his career thus far be ravaged by injuries, but a change of scenery might be good for both, and the Kings have to trade prospects soon.

On Monday, I discussed the possibility of forward Andre Lee and goalie David Hrenak joining the Reign after their college season ended, and both have officially joined since. The announcement came shortly after my Monday article came out, however, neither Lee nor Hrenak have featured in a game yet. The Reign are in desperate need of help, with several players up with the Kings, Turcotte, Madden, and Martin Frk all out right now. Lee will be another big body at forward for the Kings and should hopefully add another goalscorer at the bottom of their lineup. I’m hoping the Reign put together a line of Nikita Pavlychev-Samuel Helenius-Andre Lee, making Lee the smallest player at 6-foot-5. This would be one of the largest lines the organization has ever iced and would be for more than show, as all three would be good fourth liners.

Helenius made his Reign debut Wednesday night, in what was also his debut in North American hockey. He had a rather uneventful game on the fourth line, playing sheltered minutes as he gets used to the new league. I would expect him to take on a bigger role next season, and will likely spend most of this season in that sheltered role, adjusting. The other European signing, Kim Nousiainen has yet to make his debut, but he may draw in at some point this weekend. The Reign have secured a playoff spot and will be hoping to get healthy and see some of their best players return soon, as they’ll feel confident in a deep Calder Cup run if they have a healthy roster.

Kings’ Insider John Hoven was recently on NHL Network Radio, where he discussed, amongst other topics, Durzi’s future in the organization. While Hoven didn’t give any indication on what will happen with Durzi, his future, and the future of the King’s right side of defense, is a very interesting topic. As Hoven points out, Brandt Clarke could be NHL ready next season, Jordan Spence looks NHL ready, and Helge Grans, who’s still a very highly rated prospect, will all be competing with Durzi soon, while Matt Roy and Drew Doughty won’t be ready to give up their spot any time soon. As I said earlier when discussing Turcotte, the Kings will have to make some very difficult decisions in the future, and there will be casualties that fans aren’t happy with.

As Hoven pointed out, Durzi’s trade value has never been higher and might never be this high again. Of course, that’s not to say, “cash in on Durzi now while his value has peaked”, but it’s something to keep in mind. Assuming Clarke and Doughty are untouchable, that leaves one spot for Roy, Durzi, Spence, and Grans, not to mention Sean Walker, who has likely played his last game in a Kings jersey. Assuming Grans is still at least one season out, that leaves Durzi, Spence, and Roy fighting for one spot, two if you want to include one as the seventh defensemen. Meaning at least one of them might need to be traded. You could send Clarke down to the Ontario Hockey League (OHL) for one more season, but that only delays the decisions by one year.

I don’t envy Rob Blake and the decisions he has to make this summer, with the future of this team’s defense being one of the more difficult decisions he’ll have to make. Durzi has been a revelation on defense, and you could argue that he has saved the team’s season with his stellar play, stepping into a huge role recently with both Doughty and Roy injured. But, next season the savior could be Spence, Clarke, or Grans, no one would have expected Durzi to fill the role he is this season. Like Turcotte, I’m not suggesting the team will, or should, trade Durzi, but these are the difficult decisions that are coming soon.

The Kings picked up three of a possible four points in their back-to-back against the Edmonton Oilers and Calgary Flames, needing a shootout to decide both games. The Kings can be very happy with their point total from these two games, and they got a taste of what playoff hockey will be like, as both games were highly contested affairs. The playoff push continues on Saturday as the Kings take on the Winnipeg Jets.