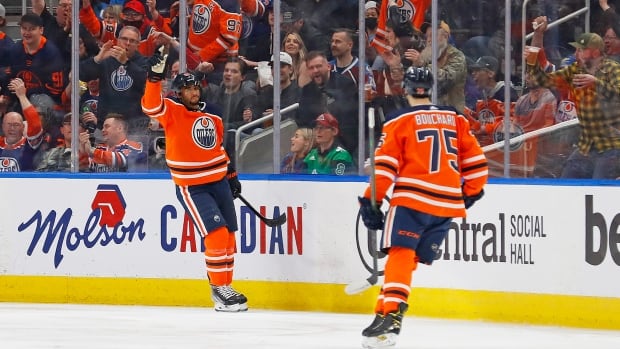 The Edmonton Oilers clinched a playoff berth in style on Friday.

Evander Kane had three goals and an assist and Connor McDavid had three assists as the Oilers emerged with a 6-3 victory over the Western Conference-leading Colorado Avalanche.

Kane now has 20 goals in 39 games since joining the Oilers mid-season.

“Any time you join a team halfway through the season, it’s going to take you more than a couple of games to really get your game to where it was maybe the previous year,” he said. “I’m continuing to develop some chemistry with my linemates.

“That takes a little bit of time, but I really like where things are at right now and I’ll just try to keep building on that.”

Evan Bouchard, Kailer Yamamoto and Kris Russell also scored for the Oilers (46-26-6), who have won four in a row and improved to 12-0-1 in their last 13 games on home ice.

“It was a game where we wanted to make a statement and keep the mojo going at home here, and clinch a playoff spot,” said Smith, who made 34 saves. “When you’re playing against the best teams in the league, you want to bring your game to the level that we are capable of.”

Valeri Nichushkin had two goals and Nathan MacKinnon also scored for the Avalanche (55-17-6), who have lost three straight and fell for just the second time this season when leading after the first period.

“I think we had a handful of guys playing hard and playing the right way and a bunch of guys that weren’t,” said Colorado coach Jared Bednar. “If it continues, it’ll be a concern.

“It takes a long time to build the right habit and the right mentality and the basis of your play in order to win hockey games on a regular basis and it can disappear in a flash. We certainly don’t want to be letting this linger.”

Colorado opened the scoring about eight minutes into the first period on a three-on-one break, as a trailing Nichushkin took a pass from Bowen Byram and beat Smith.

Edmonton’s penalty kill delivered by stopping a lengthy five-on-three advantage to start the second period. Momentum shifted the Oilers’ way as a result, with McDavid dropping a pass to Kane, who swung behind the net and caught Colorado goalie Darcy Kuemper out of position on a wraparound.

The Oilers took the lead just 1:22 later as a Bouchard shot went high off the boards and off the top of the net before he batted it in.

However, just 15 seconds after that, Nichushkin scored his second of the game and 24th of the season on a wrist shot that beat Smith stick side.

Edmonton made it 3-2 eight minutes into the second period as Duncan Keith found Kane at the side of the net.

Kane then recorded his fourth career hat trick with 5:46 left in the second period as he made a nice deke before his shot trickled over the line.

Oilers defenceman Darnell Nurse left the game with an apparent leg injury late in the second and did not return.

Edmonton padded its lead with nine minutes remaining as Yamamoto scored on a backhand spinarama. McDavid’s assist on the play gave him a league-leading 116 points on the season, matching a career high.

MacKinnon got a late goal for the Avs with their goalie on the bench. Russell iced the win with an empty-net goal.

“In a perfect world we would have liked for our season to have been a little more even-keeled, probably,” said Oilers forward Leon Draisaitl. “But sometimes that is the way it goes. At the end of the day we are in.

“That is all that matters. That was goal No. 1. We are happy about that and proud of ourselves, but we are long from done.”

Both teams return to action on Sunday. The Oilers travel to Columbus to face the Blue Jackets and the Avalanche are in Winnipeg to play the Jets.