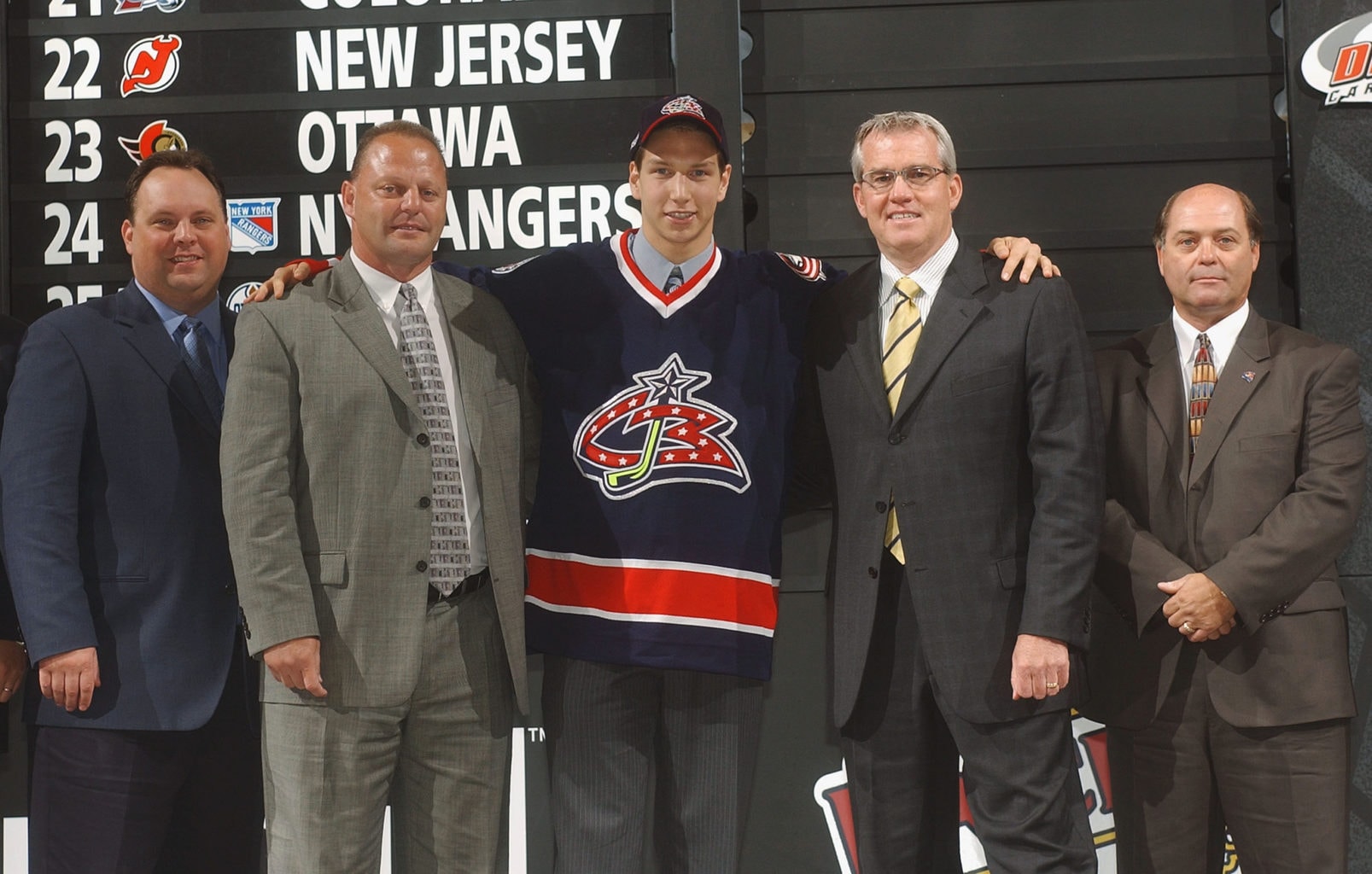 The NHL Entry Draft. For many owners, general managers, presidents, scouts, coaches, players, and prospects, the annual NHL Draft is one of the most exciting days on the calendar. It provides hope, a fresh start, and the chance to land the next great talent. If history is any indication, many of these great talents are found in the first round (picks 1-31). Some are slam dunks, while others take 3-10 years to develop into valuable NHLers. In many cases, these draft picks simply never make the grade at the NHL level.

Enter the Columbus Blue Jackets. Over the last 15-20 seasons, they have had their share of “misses” on draft day. Despite countless top-10 selections, many of the Jackets’ picks have been disappointments. Could these errors be attributed to misjudged talent by central scouting? An “eye-test” failure? Or did these players fold under the NHL’s pressure and bright lights?

At the heart of three of the selections listed below was Doug MacLean, who served as the Blue Jackets’ general manager from 1998-2007. Let’s take a closer look at some of their worst first-round draft choices throughout their 21-year history.

First up is Ukrainian-born, Russian winger, Nikolai Zherdev. Selected in the first round, 4th overall, the Blue Jackets thought they hit the proverbial jackpot when they drafted him in 2003. An excellent skater and blessed with raw talent, he was projected to be a difference-maker and form a lethal partnership with the face of the franchise at the time, Rick Nash.

However, despite posting three 20+-goal seasons in a Blue Jackets uniform, Zherdev’s tenure in Columbus will be remembered for all the wrong reasons. On many occasions, his lack of engagement overshadowed his offensive output. He had a contract dispute, developed a reputation of having a bad attitude, and often clashed with management. Not exactly the picture-perfect start to a career for a top draft pick. His road came to an end in Columbus on July 2, 2008, when he was traded to the New York Rangers.

To add insult to injury, the 2003 NHL Entry Draft is renowned as one of the deepest in recent memory. Players like Ryan Suter, Brent Seabrook, Jeff Carter, Zach Parise, Ryan Kesler, Brent Burns, and Ryan Getzlaf are all successful NHL players and they were all available and drafted after Zherdev. Looking back, the 2003 Draft has Blue Jackets fans shaking their heads.

After an abysmal 82-game season during the 2003-04 campaign when the Blue Jackets missed the postseason, they were slated to have yet another top-10 draft choice. This time around, the organization selected Alexandre Picard with the 8th overall pick. After playing for four seasons in the Quebec Major Junior Hockey League (QMJHL) with the Sherbrooke Castors and Lewiston MAINEiacs, including two 40-goal seasons, it seemed that Picard would add some much-needed goal-scoring ability upfront in Columbus. However, it wasn’t long before Picard became the Blue Jackets’ next draft “dud”.

From 2005-2010, Picard bounced back and forth between the Blue Jackets and their American Hockey League affiliate club, the Syracuse Crunch. Regardless of where he plied his trade, he just couldn’t find a permanent home and lacked any real consistency to his game. Picard’s NHL totals are a major disappointment. In 67 games over a five-year span in Columbus, he managed zero goals and 2 assists. You can read those stats again. His offensive flair and his ability to take over a game in the QMJHL was never seen in Columbus. He is another example of a top-10 Blue Jackets draft pick gone awry.

Next up is Gilbert Brule who the Blue Jackets selected 6th overall in the 2005 NHL Entry Draft (aka “the Sidney Crosby Draft”). This was the third consecutive season the organization had a top-10 draft choice and, just like the previous two seasons with Picard and Zherdev, selecting Brule was a head-scratcher. A successful stint with the Vancouver Giants of the Western Hockey league (WHL) prompted the Blue Jackets to go after Brule despite his lack of size (5-foot-10, 185 lbs). Known for his speed and grit, his on-ice production was a major concern at the NHL level from day one.

In his time in Columbus, Brule skated in 146 games with a mere 11 goals and 20 assists and a minus-25 rating. After three seasons, on July 1, 2008, he was traded to the Edmonton Oilers in exchange for Raffi Torres.

Most teams envision their draft picks (especially from the first round) to be successful and have long storied careers. Under MacLean, it seemed as though the Jackets could never hit on any of their top picks. Who were some of the other players available in the first round that summer? Anze Kopitar, Marc Staal, and Tuukka Rask, who have each gone on to have successful NHL careers. You can say that the Blue Jackets missed on yet another top prospect in the form of Gilbert Brule.

Fast-forward three seasons and the Blue Jackets had another draft pick in the top 10. In 2008, they selected Russian winger, Nikita Filatov with the 6th overall pick. He was the top-ranked European skater at both mid-term and final ranking by the NHL’s Central Scouting Bureau heading into the draft. In his first pro season, he split his time between Syracuse and Columbus.

By the next season, under the leadership of head coach Ken Hitchock, Filatov made the team out of training camp, but was often a healthy scratch, sitting out six of the team’s first 18 games. It reached the point that he threatened to head back to the Kontinental Hockey league (KHL).

Hitchock’s opinion was that Filatov paid little attention to the defensive side of the game and, as a result, saw his ice time diminish. On the ice, his numbers weren’t staggering. In 44 games, he scored 6 goals and 13 points. It’s astonishing how such a promising, talented player could have little to no impact at the NHL level. This happened one too many times in Columbus, Ohio.

Draft Day(s) to Forget in Columbus

These draft busts pinpoint the difficulties the Blue Jackets had at the draft table in the early-to-mid 2000s. What’s even more alarming is the quality of the picks that were wasted.

My name is Domenic Lunardo, and I cover all things Blue Jackets here at The Hockey Writers. I am an avid Toronto Maple Leafs fan living in Toronto, with an unmatched passion for the beautiful sport of hockey.