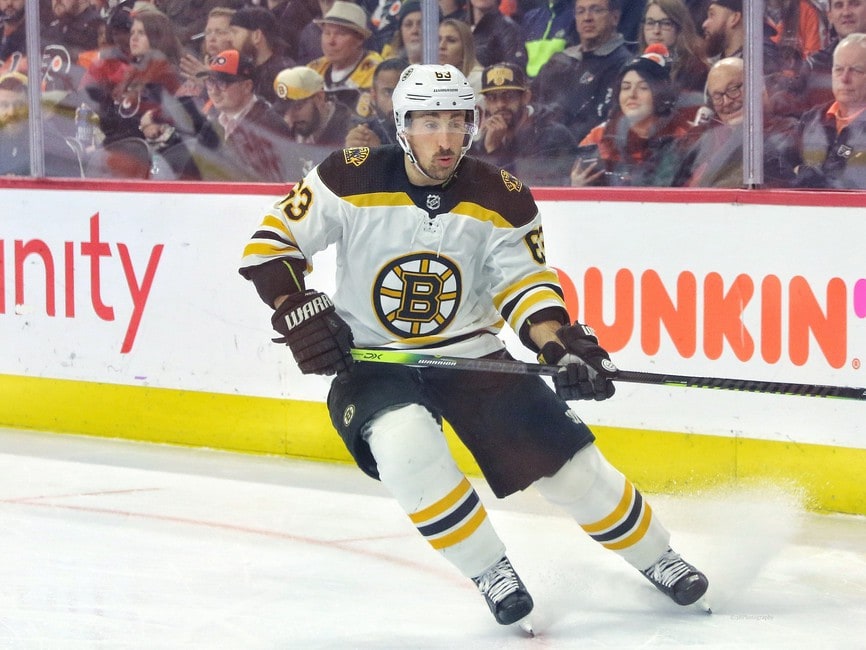 In this edition of Boston Bruins News & Rumors, Brad Marchand has been slumping through the month of April, and told reporters he isn’t happy with his game as of late. Meanwhile, his teammate in Taylor Hall recently snapped out of a goalscoring skid and appears to be heating up with playoffs right around the corner. Last but not least, David Pastrnak, Hampus Lindholm and Linus Ullmark have all returned from injury.

Marchand Not Happy With Recent Play

The month of April hasn’t been kind to Marchand, as he has just one goal and eight points through 12 games thus far. While he has still been very good in 2021-22 with 31 goals and 76 points in just 68 games, the 33-year-old has made it clear he is not happy with his play, particularly as of late.

“I haven’t been overly happy with my game the last little while, and typically when that happens the only thing to do is work through it so it was good to get out there, touch the puck, feel it and get a skate in,” Marchand told reporters after choosing to take part in an optional skate this past Wednesday. “I had some fun out there playing 2-on-2 with the other guys and that was the only reason I was out there.”

It hasn’t been very often that Marchand has went through a slump in recent years, as he has been one of the league’s most productive wingers since the 2016-17 season. If the Bruins are to go on a run this postseason, they will need him to get back to playing at an elite level.

Hall Getting Game Back on Track

Despite sitting third in team scoring, the 2021-22 season has been just an okay one for Hall, who has 57 points in 78 games. He has gone through hot and cold stretches often this year, and was recently in a lengthy slump that saw him fail to find the back of the net in eight straight contests.

Thankfully for the Bruins, he appears to be getting back on track with two goals in his past four games. Like Marchand, this team will need him to be at his best come the playoffs. In 11 postseason games last season, he managed just two goals and five points. He will have a great opportunity to redeem himself this year playing alongside Pastrnak.

The Bruins are getting healthy at the right time of the year, as Pastrnak, Lindholm and Ullmark were all able to return to the lineup on Saturday night vs. the New York Rangers. For Pastrnak, he had missed eight straight games with an undisclosed ailment. He didn’t appear to have any rust to his game, as he managed a goal and an assist in the 3-1 victory. While he did end up sitting out on Sunday, it has been confirmed that it was simply for rest purposes rather than another injury.

As for Ullmark, he was able to return to the crease after missing three games with an upper-body injury. He too looked no worse for the wear, kicking aside 30 of the 31 shots fired his way. He has been exceptional as of late and may indeed be the team’s starting goaltender for their opening playoff series in less than two weeks’ time.

Lindholm was also able to return after a seven-game hiatus due to a lower-body injury. Despite not hitting the score sheet on Saturday, he was able to play nearly 25 minutes and looked as good as advertised. Though it is still early, he appears to have been a great deadline pickup by general manager Don Sweeney. Like Pastrnak, he too missed Sunday’s game, though it was also strictly for rest purposes.

Up Next for the Bruins

The Bruins have just three games remaining for the season, with the first coming against the Florida Panthers on Tuesday. They will then take on the Buffalo Sabres on Thursday before ending their regular season with a tilt against one of their biggest rivals in the Toronto Maple Leafs on Friday. All three will be massive games as they look to track down the Tampa Bay Lightning for third place in the Atlantic Division.