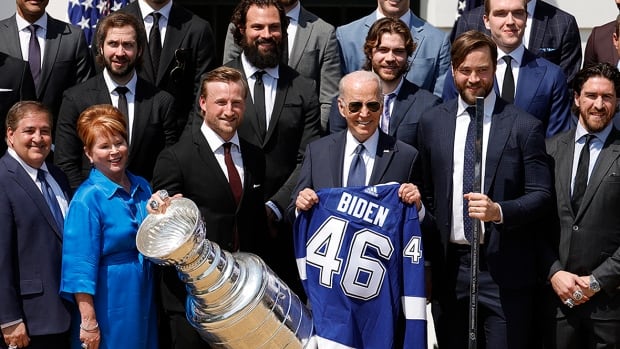 Joe Biden joked Steven Stamkos was getting old after playing in the National Hockey League for 14 seasons, praised the Tampa Bay Lightning’s vaccine efforts and otherwise avoided politics while honouring the team for winning the Stanley Cup each of the past two seasons.

In a rare sports break amid his administration’s response to Russia’s war in Ukraine, the president on Monday referenced first lady Jill Biden’s attendance at a vaccination event at the Lightning’s home arena last year and congratulated the Lightning for winning two pandemic championships: one in an empty building in a quarantined bubble and another in a packed house at home in Tampa.

“I’m not saying that the first lady being there at your arena during the playoffs is why you won,” Biden said with a smile. “But just saying that she was there during the election season, as well. She seems to show up when people win. Just something to think about.”

Biden made little mention of players other than Stamkos while talking about the Lighting’s back-to-back title runs, which relied heavily on Russian goaltender Andrei Vasilevskiy, forward Nikita Kucherov and defenceman Mikhail Sergachev. Vasilevskiy was the playoff MVP last year, and Kucherov was the top scorer in each postseason.

All three players attended the event, and Sergachev shared photos of them around the White House on social media. There were no noticeable absences, and a handful of players from the Lightning’s 2020 championship team who had departed or retired even made appearances.

Just for this occasion, the team made a third trip to the nation’s capital in eight months after already visiting the Washington Capitals twice this season. The Lightning flew Sunday night after playing at the Florida Panthers and were set to return home before facing the Columbus Blue Jackets on Tuesday in one of their final games of the regular season before the playoffs begin next week.

“Pretty much everybody was on board, and everybody that could make it — former players and stuff — they all tried to make it here,” alternate captain Ryan McDonagh said. “It’s just a great tradition that we have: You become part of a championship team, you get to go to the White House and meet the president.”

Despite the Lightning winning the Stanley Cup three times — in 2004, 2020 and 2021 — it was the organization’s first time visiting a sitting president at the White House. The 2004-05 NHL lockout prevented that year’s team from going, and the pandemic delayed this opportunity until nine months after the second of these back-to-back championships.

“It was a long time in the making,” Stamkos said. “We weren’t sure if we were going to get this opportunity, but it was certainly worth the wait.”

Stamkos, who is Canadian, deferred to McDonagh, a Minnesota native, to speak on behalf of the team at the ceremony. Players and coach Jon Cooper, who were wearing both Cup rings, were most impressed by Biden inviting them into the Oval Office to chat afterward.

“In the position he’s in [being] the leader of the free world and all that stuff, he has an amazing ability to wipe that persona aside and just be a human being like he was one of our teammates,” said Cooper, who is a dual citizen of the U.S. and Canada. “I kind of wanted to get greedy and sit down with a beer on a barstool with this guy and listen to the story of his life. You can see why he was elected president.”

Biden won some more points when he praised the Tampa area for Major League Baseball’s Rays reaching the World Series in 2020 and the NFL’s Buccaneers winning the Super Bowl months later. He said the Lightning “may be here next year — who knows?”

The Lightning are again among the NHL’s top teams and are looking to become the first to win the Cup three years in a row since the New York Islanders dynasty in the early 1980s.

“The good thing with our group is the hunger’s still there,” McDonagh said. “We don’t need any kind of extra motivation, but certainly this does heighten the excitement, for sure, going into the last week of the regular season and before the start of the playoffs.”