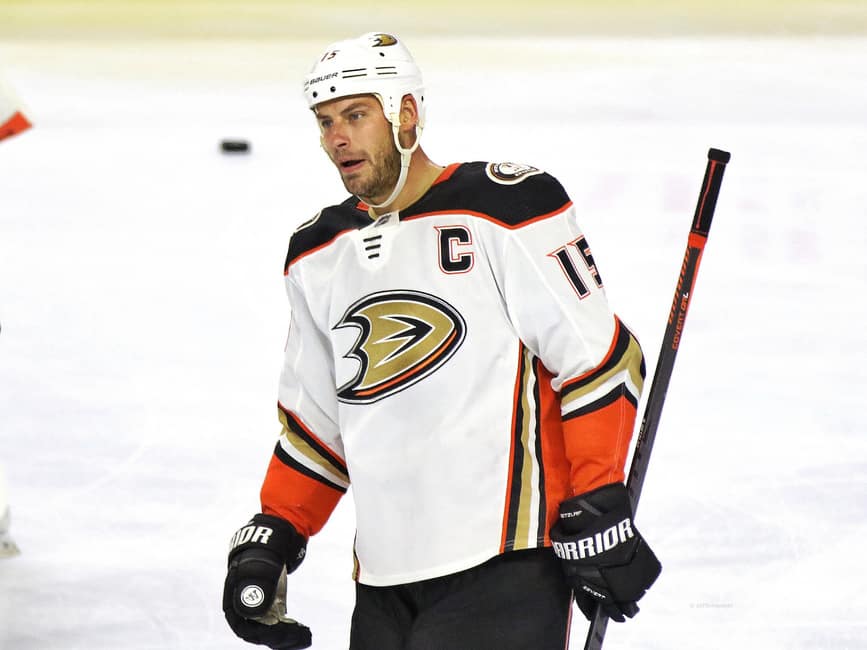 In this edition of “NHL Talk,” these are the top hockey stories with quotes from players, coaches, managers, and more. Check Tom Pepper’s profile every day for a new edition of the “NHL Talk” column.

Anaheim Ducks forward Ryan Getzlaf tallied a beautiful behind-the-back assist in his final NHL game on Sunday, a 6-3 loss against the St. Louis Blues. He finishes his career with 1019 points (282 goals, 737 assists) in 1157 NHL games and is the only player in Ducks history to reach 1000 points and play 1000 games. His final point of a 17-year career, including 12 years as Anaheim’s captain, came with 2:41 remaining in the third period, setting up Adam Henrique for what will go down as one of the most memorable assists of Getzlaf’s career.

“This is a game that I’ve loved for so long, and I tried to give everything that I had every time I stepped on this ice,” Getzlaf said. “I’ve been able to build this beautiful family next to me, and I’m just looking forward to that next chapter right now.”

Winnipeg Jets goaltender Connor Hellebuyck picked up his 200th NHL career win in a 4-1 victory against the Colorado Avalanche on Sunday. He saved 30 of 31 shots for a .968 save percentage (SV%), getting the Jets back in the win column to end the team’s four-game losing streak. Winnipeg fans showed their appreciation for Hellebuyck at the end of the game, rewarding him with a standing ovation.

“It just shows that the fans appreciate everything I’ve accomplished here with them,” Hellebuyck said. “I’m glad to call Winnipeg my home these past few years and look forward to some more.”

The Tampa Bay Lightning scored eight goals in an 8-4 win at the Florida Panthers on Sunday, putting an end to their rival’s 13-game winning streak. The Battle of Florida continues to heat up between the two teams, with the Lightning getting the better of the NHL’s No. 1-ranked Panthers this time around. Tampa Bay sits in third place in the Atlantic Division, five points behind the Toronto Maple Leafs and three points ahead of the Boston Bruins.

“We knew the streak they were on,” Lightning forward Nick Paul said. “And we wanted to come here and be the ones that ended it.”

Washington Capitals forward Alex Ovechkin suffered an upper-body injury and left early in the third period of a 4-3 shootout loss against the Maple Leafs on Sunday. The injury occurred after he was stopped on a breakaway, tripping over the stick of Toronto goaltender Erik Kallgren and crashing shoulder-first into the end boards. He did not return to the game and is listed as day-to-day.

“I just talked to him, and I think he’ll be all right,” Capitals forward T.J. Oshie said. “It’s always scary seeing ‘Big 8’ go down and lay on the ice. He’s a tough guy. If there was anyone I would imagine wouldn’t miss any more time than he needs to, it’d be 8.”

The Vegas Golden Knights are still fighting to qualify for the 2022 Stanley Cup Playoffs but had their hopes dimmed in a 5-4 shootout loss to the San Jose Sharks on Sunday. The Golden Knights were on their way to a regulation win, but Sharks forward Timo Meier managed to tie the game at 4-4 with just 0.9 seconds remaining in the third period. Vegas eventually lost in a shootout, earning one point to move within three points of the Dallas Stars, who they will face off against on Tuesday, for the second wild-card spot in the Western Conference.

“Definitely, a tough pill to swallow,” Golden Knights forward Mark Stone said. “We have to win the next game [Tuesday at the Stars]. If we win the next game, you never know what could happen. You can get some help. We’ve gotten some along the way. Really a devastating loss, but we’re still in it. You have to think that way. We have to win a big game on Tuesday to keep our chances alive.”

Tom Pepper is a columnist at The Hockey Writers since June 2020. He writes the “NHL Talk” column every day and Anaheim Ducks features every week.