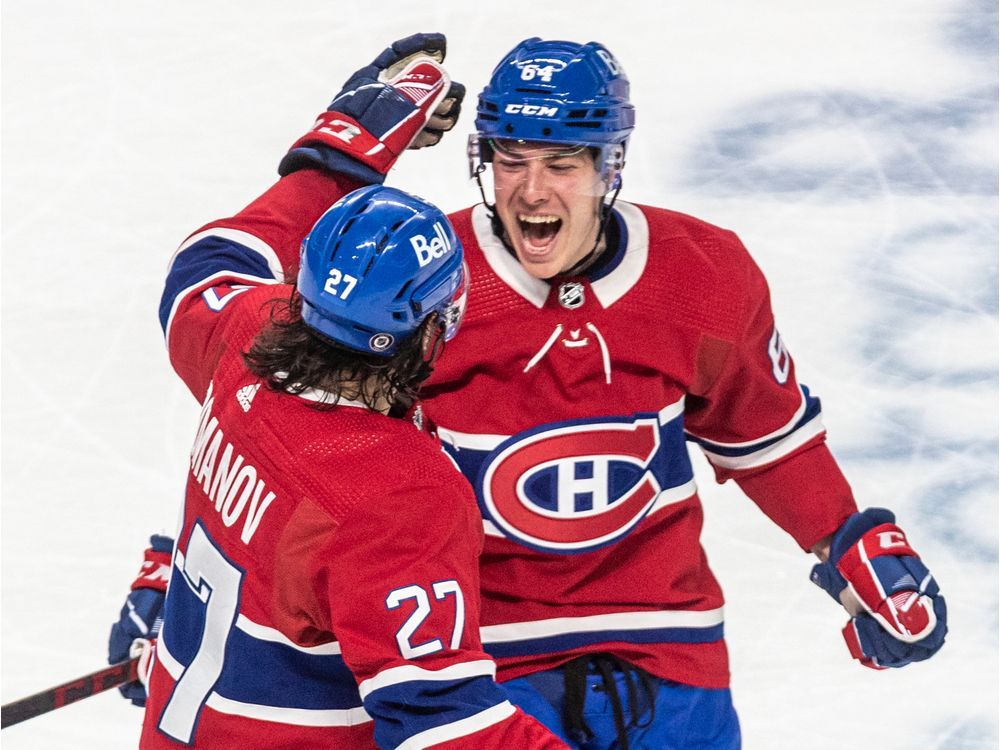 Undrafted free agents aren’t supposed to make it to the NHL — especially at age 26.

While 24 games with the Canadiens hardly constitute a career, defenceman Corey Schueneman proved this season that anything’s possible.

He was promoted by Montreal on six occasions, at times only to fill a role on the taxi squad. But he played his first NHL game on Dec. 28, with Jeff Petry, Ben Chiarot and Chris Wideman out with COVID-19. Schueneman produced an assist in the 5-4 overtime defeat to Tampa Bay. He scored his first NHL goal on March 17 against Dallas.

“I wasn’t worried about how long it took me,” Schueneman said on Tuesday. “I wasn’t concerned with that. Every year, I thought I was getting better and developing. I kept thinking, if I do that, it’s only a matter of time. I thought I was playing well. That mentality never changed.

“I’m on my own path, my own schedule. That shouldn’t really matter to anyone else.”

Schueneman had two goals and four assists during his various stints with the Canadiens before being returned — for the final time — to the Laval Rocket on April 20. The 6-foot, 200-pounder didn’t look out of place at the NHL level, where he averaged 16:36 of ice time while getting pucks to the net on the power play.

“I think I played well and took advantage of the opportunity,” he said. “A lot of people had no idea who I was. Obviously, a lot of people still don’t. That’s kind of how it has been, and I’m not worried about that. My goal’s to get back up there and stay there, however long it takes. That’s my path and schedule.”

While the Canadiens are playing out the string, won’t make the playoffs and conclude their season Friday at home against Florida, the Rocket qualified for the AHL playoffs and will be playing into May, although the team’s seeding and opponent hasn’t been determined.

“He really opened some eyes this year, playing well for us and getting called up,” Laval head coach Jean-François Houle said. “He kept it simple and moved the puck quick. He did all the right things to stay up there. I’m sure he’s proud of himself for that. It bodes well now that he’s got his name on the map for the NHL.”

In 29 games with the Rocket, Schueneman has three goals and 10 points. Houle considers him a good skater who sees the ice well, makes a good first pass out of his zone and defends well. Now in his second season with the Rocket, the mobile puck-carrier quickly earned the trust of former Laval coach Joël Bouchard.

“He’s got a lot of qualities,” Houle said. “If he puts everything together and keeps it simple, he’s got a chance to make a career in the NHL. It’s up to him now. He’s got the foot in the door. Now he has to stay there.

“We’re pleased to have him back. We think he makes our team better.”

A native of Milford, Mich., outside Detroit, Schueneman took the NCAA route, playing four seasons at Western Michigan University, where he graduated with a degree in sales and business marketing while being named team captain as a senior. Following an amateur tryout, he signed with Stockton of the AHL, Calgary’s primary affiliate. He left the Heat as a free agent, signing with Laval in 2020.

Last April, on the recommendation of Scott Mellanby, the Canadiens’ former assistant general manager, Schueneman was signed to a two-way contract.

He has worked hard on his game after being told he wasn’t good defensively, didn’t show enough hockey IQ and played with his head down.

“You can go out there and get better at it or let it get you down,” Schueneman explained.

The Rocket carried a three-game losing streak — during which it was held to one goal in each match — into Wednesday’s home game against Toronto. Laval entertains the Marlies again Thursday before concluding its regular-season Saturday at Syracuse.

While the offence has suddenly gone dry, Houle’s more concerned with the 14 goals allowed during the stretch.

“Play well defensively, take care of our own end and the offence will come,” he said. “We don’t want to be limping into the playoffs. We need a couple of wins under our belt.”

Meanwhile, centre Lukas Vejdemo underwent season-ending surgery for a lower-body injury this week. He has six goals and 16 points in 34 games. He scored one goal in six games with the Canadiens this season.

Sign up to receive daily headline news from the Montreal Gazette, a division of Postmedia Network Inc.

Thanks for signing up!

A welcome email is on its way. If you don’t see it, please check your junk folder.

The next issue of Montreal Gazette Headline News will soon be in your inbox.

We encountered an issue signing you up. Please try again