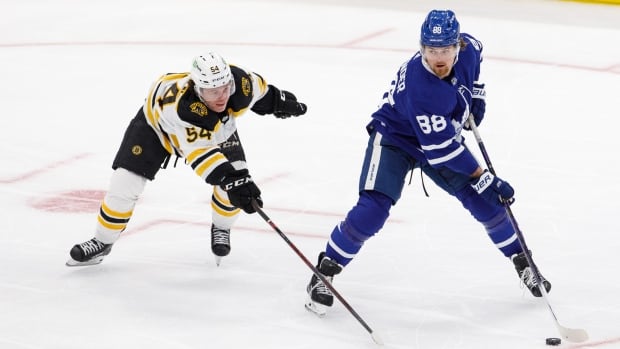 William Nylander scored twice as the Toronto Maple Leafs defeated the Boston Bruins 5-2 on Friday in a regular-season finale that saw both teams rest most of their stars ahead of the playoffs.

With the victory, the Leafs ensured they will face the two-time defending Stanley Cup champion Tampa Bay Lightning in the first round, while the Bruins are set to meet the Carolina Hurricanes.

Trent Frederic and Jake DeBrusk replied for Boston (51-26-5), which got 22 stops from Jeremy Swayman. Craig Smith had two assists.

Having already locked up the Atlantic Division’s No. 2 seed, the Leafs rested Auston Matthews, Mitch Marner and John Tavares up front, while No. 1 goaltender Jack Campbell served as the backup.

William Nylander scored twice leading Toronto to a 5-2 win over Boston, Leafs to face Lightning in round one. 1:31

The Bruins, meanwhile, were minus Patrice Bergeron, David Pastrnak, Brad Marchand and Taylor Hall. Charlie McAvoy sat out on defence.

The combined absences from both clubs added up to nearly $73 million US in sidelined salary-cap dollars.

Boston, which was playing the second of a back-to-back, still had a chance of catching Tampa for third in the division entering play, but will instead finish as the Eastern Conference’s first wild-card seed.

The Bruins scored 70 seconds into the opening period of a game that had an exhibition feel with little intensity when Frederic poked his eighth goal of the season past Kallgren.

Toronto responded at 3:51 on the power play after Boston’s Marc McLaughlin was assessed a four-minute penalty for high-sticking when Mark Giordano’s point shot glanced off Mikheyev in front for his 21st of 2021-22.

The Leafs took the lead at 13:16 when Nylander stole the puck from McLaughlin and raced in alone on Swayman before adding to a career-high goal total with his 33rd.

Playing his ninth NHL game after signing with Toronto following the conclusion of his U.S. college season in late March, Abruzzese then scored his first in the NHL on a nice deflection of a Morgan Rielly point shot with 6.7 seconds left in the period.

The Bruins started to throw their weight around in the second, but there still wasn’t much emotion until late in period when Tomas Nosek cross-checked Toronto defenceman Timothy Liljegren from behind into the boards.

Rielly responded by grappling with the Boston forward for offsetting minor penalties before Nylander scored his 34th eight minutes into the third.

Nick Foligno, a Toronto trade deadline acquisition last season, jammed a puck home with 9:36 left in regulation, but the home side correctly challenged for offside.

DeBrusk eventually made it 4-2 with his 25th with 7:11 left in regulation, but Kallgren shut the door from there for his eighth victory before Engvall scored his 15th into an empty net.

The Winnipeg Jets continued putting up a positive ending to their season with a 3-1 victory over the Calgary Flames that halted the playoff-bound club’s point streak at seven games.

Blake Wheeler, Mason Appleton and Brenden Dillon scored for Winnipeg (38-32-11), which concludes its season Sunday afternoon against the Seattle Kraken.

Matthew Tkachuk recorded his 42nd goal of the season for the Flames (50-22-11), who were 5-0-2 heading into their last game of the regular season.

Connor Hellebuyck made 32 saves for the Jets, who are wrapping up their campaign with a four-game homestand (3-0-0) that also includes victories over Colorado and Philadelphia.

Tkachuk extended his point streak to eight games (five goals, seven assists) with an unassisted goal at 3:19 of the opening period.

After he blocked a shot by defenceman Dillon, he collected the puck for a breakaway. Hellebuyck got a piece of Tkachuk’s shot, but the puck still went over the line.

Calgary took a pair of penalties midway through the first period, giving the Jets a five-on-three for 1:18 they couldn’t capitalize on. Vladar stopped Wheeler close in, then leading-scorer Kyle Connor shot wide of the net.

Wheeler made good on his opportunity with 13 seconds left in the period, using a backhand cross-ice pass from Nikolaj Ehlers to fire a one-timer past Vladar his 16th of the season.

Calgary outshot Winnipeg 18-12 in the first period, but the Jets flipped it to 19-8 in their favour during the second.

Appleton gave Winnipeg the 2-1 lead at 6:06 of the middle frame off a rebound from defenceman Josh Morrissey’s point shot.

The Jets went on the power play less than two minutes later, but only put two shots on net.

Hellebuyck denied Tyler Toffoli on a close shot with under three minutes left in the period.

Connor was snake bitten a few more times, missing the net early in the second and third periods.

When Winnipeg went on its fourth power play eight minutes into the third, another Connor blast got blocked. Adam Lowry was denied by Vladar in front of the net as the man advantage came to an end.

Dillon scored into an empty net with 20 seconds remaining.

Calgary was 0-for-2 on the power play.

On his 700th career start, Carey Price made 37 saves to record his first win this season.

Jonas Johansson had a tough night at the office allowing 10 goals from 37 shots.

The Canadiens (22-49-11) took an early lead by scoring three goals on their first three shots.

Jordan Harris notched his first career goal from the point with the first shot of the night.

Mike Hoffman tapped in a loose puck in the crease to get the Habs up by two goals. Then Caufield winded a wrist shot to get Montreal up by three.

Gallagher added a power-play marker to give Montreal a 4-0 lead.

The Panthers (58-18-6) cut their deficit to three when Ben Chiarot scored his first goal back at the Bell Centre on the power play at 18:23 of the first period.

Montreal responded with four goals in the second period.

Caufield matched his jersey number with his 22nd goal at 1:33. Perrault followed up with his fourth of the campaign.

Pitlick connected with Jake Evans alone in front of the net at 6:08. Dvorak then tapped in Montreal’s eighth goal.

Caufield completed his first NHL hat trick at 8:12 of the third period and kept one of the hats as a souvenir.

Noel Acciari added a late Florida marker, but the league’s best team left the ice with an embarrassing 10-2 loss.

Brady Tkachuk had a goal and an assist to lead the Ottawa Senators to a 4-2 victory over the Philadelphia Flyers on Friday night in the season finale for both teams.

Josh Norris and Travis Hamonic also scored and Austin Watson had an empty-netter for the Senators, who finished out of the playoffs for the fifth straight season.

James van Riemsdyk and Owen Tippett scored for the Flyers, who capped one of the worst seasons in franchise history. Boos reigned down as they skated off the ice.

Tkachuck reached the 30-goal plateau for the first time in his career with the eventual winning tally on a wrist shot on a power play with 3:22 left in regulation.

Hamonic put the Senators ahead 2-1 1:56 into the final period on a slap shot, and Tippett tied it with Philadelphia’s second tally on the man-advantage with 7:27 left in the third.

The Flyers’ season was tumultuous on and off the ice. They finished with fewer victories in a full season only three other times, two of which came in the second and third year of the club’s existence. They entered Friday with the worst power play in the league and third-worst goals per game.

They fired coach Alain Vigneault in December, replacing him with interim Mike Yeo; endured a pair of double-digit losing streaks, including a franchise-worst 13-game skid; got called out from prominent former players for sitting a healthy Keith Yandle earlier this month, ending his NHL-record 989-game ironman streak; and traded away longtime captain Claude Giroux in March.

Injuries only told part of the story for the Flyers, who got ineffective play from players up and down the lineup, many of whom regressed.