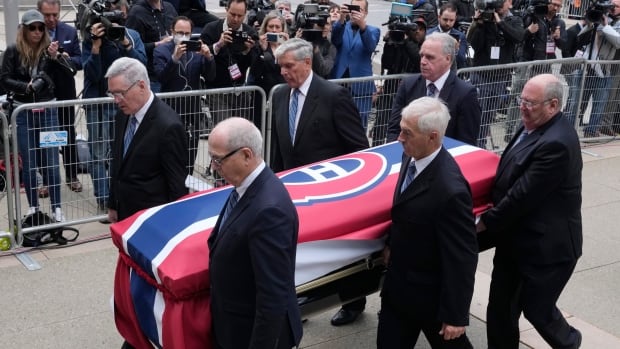 Quebecers and hockey fans around the world are giving Canadiens legend Guy Lafleur a final send-off, as the province holds a national funeral in his honour.

Lafleur, who captured five Stanley Cup titles and was a hero in Quebec not only for his athletic prowess but also his kindness and generosity, died after a series of prolonged health issues, including lung cancer. He was 70.

The funeral for the man known affectionately as le Démon Blond is underway at Mary Queen of the World Cathedral in downtown Montreal. CBC is carrying the ceremonies live, with English translation, in the livestream above.

The church’s choir performed as Lafleur’s casket — draped in the Montreal Canadiens flag — was carried to the front of the cathedral.

Montreal Archbishop Christian Lépine is presiding over the funeral. Michel Lacroix, the Montreal Canadiens’ in-arena announcer, will be introducing several speakers throughout the ceremony. Many chose to wear a black and white pin with the number 10 on it, in honour of Lafleur’s jersey number.

Geoff Molson, the team’s owner, was the first to speak, followed by Lafleur’s longtime teammate and captain Yvan Cournoyer.

Cournoyer highlighted Lafleur’s love for hockey and how difficult it was for him to stay away from the game following his first retirement. He shared a story about how his friend, seemingly bored, had once cleaned his car three times in a single day.

Lafleur would eventually decide to end his retirement and resume his playing career.

“Guy left us too soon. But if he wants to make another comeback, you are more than welcome,” Cournoyer said, before beginning a chant of “Guy!” — a common cheer in Lafleur’s heyday — sparking a round of applause from the audience.

Guy Carbonneau, another former Canadiens captain, shared stories about being a rookie on a team surrounded by Lafleur and other Habs greats who were already veterans at that point.

“When I got to my first training camp with the Canadiens, I had to pinch myself. From the first day, they put me [on a line] with Steve Shutt and Guy Lafleur,” Carbonneau said.

“From what I remember, I don’t believe I touched the puck a single time out of fear of disappointing them.”

The funeral follows two days of public visitation at the Bell Centre, where thousands lined up for hours for a chance to pay their respects.

WATCH | Thousands of fans paid their respects to Guy Lafleur in Montreal:

Lafleur’s hockey greatness, his charitable nature and his humility were common themes in Tuesday’s speeches.

Martin Lafleur, Guy’s son, said his father always remained humble despite his legendary status. His favourite memories with his father include going to practices at the old Montreal Forum, playing alongside his dad in games that featured other Habs legends and days spent barbecuing at home near the pool.

“Even if he would burn the hamburgers on the barbecue every time and blame, of course, the barbecue,” said Lafleur’s son.

Legendary Canadiens goaltender Patrick Roy likened his relationship with Lafleur to a hockey game featuring three periods: The first period being their time spent as teammates, the second being their time as opponents, and the third being their post-retirement friendship.

“In light of the huge void that your death has created, I admit that I would be up for an overtime [period],” Roy said.
“Rest in peace, my friend. Everyone here knows you’re a real one.”

Prime Minister Justin Trudeau and Quebec Premier François Legault are among the long list of dignitaries attending. They both addressed reporters prior to the ceremony.

“Today is a day to say thank you to Guy Lafleur for everything he gave us over so many years,” said Trudeau, moments before he entered the church with his wife, Sophie Grégoire.

“All the wins, all the inspiration, the incredible games he played but also his deep humanity. His contributions to the world around him were legendary and an inspiration to us all.”

Legault described Lafleur as “the idol for the Quebec nation.”

“We were so proud that a guy coming from here was the best player in the world,” Legault said.

On TV: CBC News Network will be live from the Mary Queen of the World Cathedral Tuesday morning as of 8 a.m. A network special following the ceremony, with live translation, will begin at 10 a.m. Local programming in Montreal will continue the coverage throughout the day.

On Radio: A Montreal radio special will run on 88.5 FM — and across the stations of the Quebec Community Network —on Tuesday from 11 a.m. to 1:30 p.m. ET, hosted by Shawn Apel and co-hosted by Shawn Lyons, including live updates from the scene from local reporters.