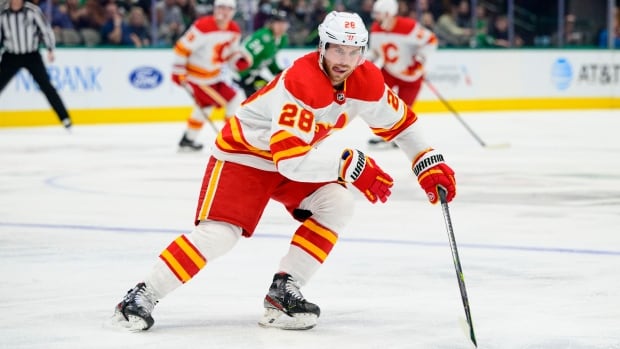 Elias Lindholm scored the lone goal for the Calgary Flames on Tuesday in a 1-0 win to open their playoff series against the Dallas Stars in Calgary.

Game 2 in the best-of-seven series is Thursday at the Saddledome before heading to American Airlines Center for Saturday’s Game 3 and Monday’s Game 4.

Lindholm scored a power-play goal early in the first period. Jacob Markstrom stopped all 16 shots he faced in front of a Saddledome sellout for his second career playoff shutout.

The playoff win was just Calgary’s second at the Saddledome since 2015.

Dallas starter Jake Oettinger turned away 25-of-26 shots for the loss in his NHL playoff debut.

Calgary (50-21-11) topped the Pacific Division, while the Stars (46-30-6) entered the playoffs via the Western Conference’s first wild-card berth.

Calgary led 1-0 after a dominant opening period. The Flames held the Stars to three shots, and the first didn’t happen until 11:05.

Both clubs had to absorb the loss of key defenceman at the end of the first period when Calgary’s Rasmus Andersson and Dallas’s John Klingberg were served game misconducts for fighting at the buzzer.

That tussle followed Matthew Tkachuk and Michael Raffl also throwing punches at the period’s close. Tkachuk shoved Klingberg hard into the boards behind Calgary’s net in the dying seconds.

Without Klingberg, their power-play quarterback, the Stars went 0-for-5 with a man advantage.

The clubs traded chances in the third. Dallas mustered more sustained pressure in Calgary’s zone in the second period, but still trailed by a goal after 40 minutes.

A Blake Coleman goal for Calgary midway through the second period was waived off because of his interference penalty.

Stars defenceman Jani Hakanpaa was penalized for an illegal check to Coleman’s head in the first period, and the Flames made the visitors pay scoring off the ensuring faceoff.

Lindholm won the draw and took a Tkachuk feed from the boards. Lindholm bent his right knee to get oomph behind a wrist shot that beat Oettinger under his glove at 5:01 of the period.

Coleman, who signed with Calgary last year after winning back-to-back Stanley Cups with the Tampa Bay Lightning, went to the bench in distress after the Hakanpaa hit, but the winger finished the period.

The Edmonton Oilers, Calgary Flames and Toronto Maple Leafs are competing in the NHL playoffs this season, bringing renewed optimism one of them will finally end Canada’s 28-year Stanley Cup drought. 2:04