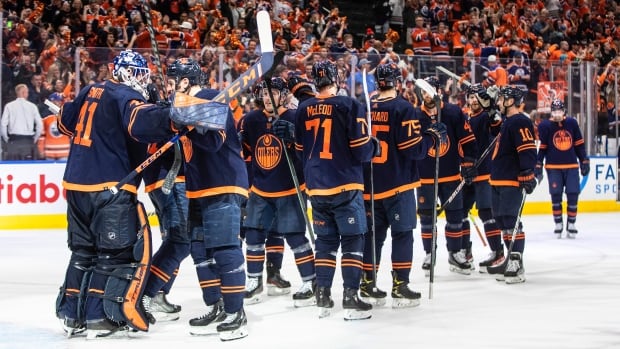 NHL teams are taking different approaches to crossing the U.S.-Canada border during the first round of the playoffs with the U.S. still requiring a negative COVID-19 test for all passengers arriving on international flights.

The Edmonton Oilers and the Toronto Maple Leafs took their time getting to their U.S. destinations ahead of Game 3 in their first-round playoff series.

Instead of taking a charter flight directly to California, the Oilers opted to fly to Vancouver after their Game 2 win on Wednesday, spend the night in a hotel, then bus over the border on Thursday morning before flying from Bellingham, Wash., to California.

Following their Game 2 loss in Toronto, the Leafs also crossed into the U.S. by bus and flew out of Buffalo, N.Y., on Thursday.

The unique journeys allowed both teams to avoid COVID-19 testing. Current restrictions require people entering the States via air to provide a negative COVID-19 test, something not required at a land border crossing.

Asked about the decision, Toronto forward Jason Spezza responded with a laugh.

“As long as it all leads to the arena, I’m pretty happy.”

Choose your own adventure

The long way was the preferred way for the Tampa Bay Lightning, Dallas Stars, Los Angeles Kings and Calgary Flames, which all opted to test and fly direct when their respective series shifted from Canada to the U.S. late this week.

“We didn’t cross the border by bus,” Tampa Bay coach Jon Cooper said Friday before Game 3 against Toronto. “Everybody passed the tests.”

Choose your own travel adventure has become the latest pandemic wrinkle to the fight for the Stanley Cup. Deputy Commissioner Bill Daly said the NHL did not make any particular recommendations but has no problem with the creative arrangements.

“We have no objection or issue with them utilizing the rules and policies that have been put in place by the applicable health authorities to their maximum advantage,” Daly said in an email Friday.

The situation is nothing like the past two years when cross-border travel was a major headache for the NHL.

In 2020, the league held a 24-team post-season in Toronto and Edmonton with strict quarantines in place and no fans. Last year, facing uncertainty over border restrictions, the league temporarily realigned its divisions for a shortened season, with all seven Canadian teams playing only each other through the first two rounds of the playoffs.

Oilers head coach Jay Woodcroft said the longer travel day was the smartest move for his group and that players were involved in choosing the itinerary.

“I think what you want to do is you want to make the best decision possible for your group and was one that we gave a lot of thought to,” he said Friday night after the team arrived at its hotel in downtown L.A. “It was executed excellently today and we’re getting ready for Game 3 tomorrow.”

The Oilers have the only unvaccinated player in the NHL playoffs: Josh Archibald, whose cardiologist was able to secure a medical exemption for the 29-year-old forward because of a heart condition known as myocarditis.

Archibald played in only eight games during the regular season but is available in the playoffs on either side of the border and was in the lineup for Game 2 when Edmonton evened its series against the Kings.

The team has not decided whether it would make the same journey if the series returns to California for a Game 6. The best-of-seven matchup is currently tied at 1-1.

During their first-round NBA playoff series against the Toronto Raptors, the 76ers bused to Buffalo, N.Y., before continuing on to Philadelphia.

The Red Sox reportedly returned to Boston via bus after a four-game series against the Blue Jays at the end of April.

“The biggest thing was really just following the lead of the NBA and MLB teams that have been making that trip across the border,” said Leafs head coach Sheldon Keefe. “I think the biggest thing at this point of the year really is just to do all that we can to avoid any false positives or anything like that might come up that would impact our group.”

The alternate arrangements were “a little bit of a wrinkle,” but the team arrived in Florida at about the same time it would have via a direct flight, said Leafs captain John Tavares.

“We’ve heard of some teams in other sports doing it,” he said. “We talked about last week a little bit amongst the group and just trying to do everything we can to give us the best chance for success.”

Other NHL teams are believed to have travelled to Bellingham following games in Vancouver near the end of the NHL’s regular season.

Both the Kings and Lightning took direct flights home.

The Calgary Flames took a charter directly to Dallas Friday morning ahead of Game 3 against the Stars on Saturday.

Woodcroft said his group wasn’t troubled by the unique logistics.

“I thought it was a really well-executed day. It’s a credit to the people that put it together with our travel department,” he said. “The players are energized by how we travelled and being in the California sunshine.”

The travel day was “a little different than normal,” said defenceman Evan Bouchard.

Asked whether he had exhausted Netflix during his ample time in transit, he smiled.