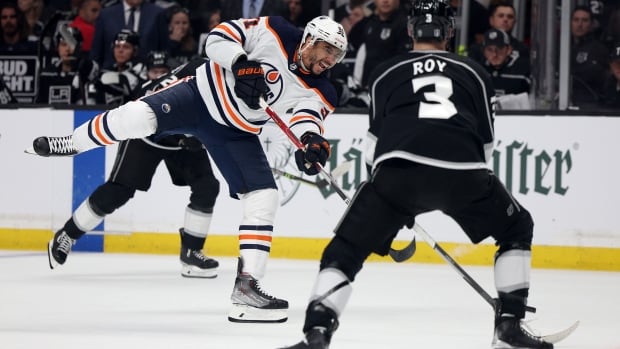 Evander Kane scored a hat trick and the visiting Edmonton Oilers continued their offensive domination with a decisive 8-2 win over the L.A. Kings in Game 3 of their first-round playoff series on Friday.

The Kings replied with a goal and an assist from Anze Kopitar, and a goal from Philip Danault.

Facing a season-high 46 shots, Mike Smith made 43 saves to collect the 13th playoff win of his career.

The Oilers chased L.A. netminder Jonathan Quick midway through the second period after he allowed four goals on 19 shots. Cal Petersen stopped 16 of 20 in relief.

The series continues with Game 4 in Edmonton on Sunday before returning to Edmonton for Game 5 on Tuesday.

Evander Kane scores three times in Edmonton’s 8-2 victory over Los Angeles and takes a 2-1 series lead in their first round series. 1:08

Kane completed the fifth hat trick of his career with just 19.7 seconds left on the clock, sending a wrist shot past Petersen to seal the score at 8-2.

Nugent-Hopkins put away the final two goals of the game 81 seconds apart late in the third period.

His first came 14:19 into the frame when he collected a puck from Hyman and blasted a snap shot past Petersen from the hash marks, shattering his stick in the process.

McDavid nearly added to Edmonton’s tally earlier in the period, bumping the puck off Adrian Kempe’s stick and sprinting deep into the L.A. zone, but his ensuing wrist shot went off the post.

The Kings finally got their first power-play goal of the series 17:29 into the second after Derek Ryan was called for interference on Blake Lizotte.

Seconds into the man advantage, Kempe fired a slapshot at Smith. The goalie stopped the initial blast but Danault was there to collect the rebound and backhand it into the Edmonton net to make it 5-2.

L.A.’s power play has struggled through the series, going 1 for 12 across three games, and 1 for 4 on Friday.

The Oilers were 1 for 3 with the man advantage in Game 3 and improved to 5 for 11 in the series.

There was a busy three minute, 33 second stretch in the second with goals at both ends of the ice.

L.A got on the board at the 10:07 mark when Kopitar muscled his way past Draisaitl down low and backhanded a shot past Smith, cutting L.A.’s deficit to 5-1.

The goal was the first Smith conceded in 95 minutes and 21 seconds of play.

Edmonton went up 5-0 just 16 seconds earlier when Ceci launched a long bomb from inside the blue line and Kane batted in a rebound from the top of the crease for his fourth goal of the playoffs.

Hyman scored his second of the night 7:42 into the second, beating Athanasiou to a puck along the boards and driving to the net before sending a shot in from the hash marks.

L.A. pulled Quick after the goal and Petersen took over the Kings’ net.

Ceci notched his first assist of the night 6:27 into the second, picking off a Kings’ pass at the blue line and sending it in to the front of the net, where Kane tucked a shot around Quick’s outstretched leg to give Edmonton a 3-0 cushion.

The Kings outshot the Oilers 19-7 across the first but Edmonton made the most of its opportunities.

Hyman bumped the lead to 2-0 just 6:07 into the opening frame, deflecting in McDavid’s shot from inside the faceoff circle on a power play. The goal was his first of the playoffs.

The Oilers opened the scoring 3:50 into the game during a stretch of four-on-four hockey after L.A.’s Brendan Lemieux and Edmonton’s Brett Kulak were called for roughing.

Draisaitl and McDavid used the open ice to break off for a two-on-one with McDavid carrying the puck. The Oilers’ captain sliced it across the slot to Draisaitl, who snapped a shot in behind Quick for his third goal of the playoffs.