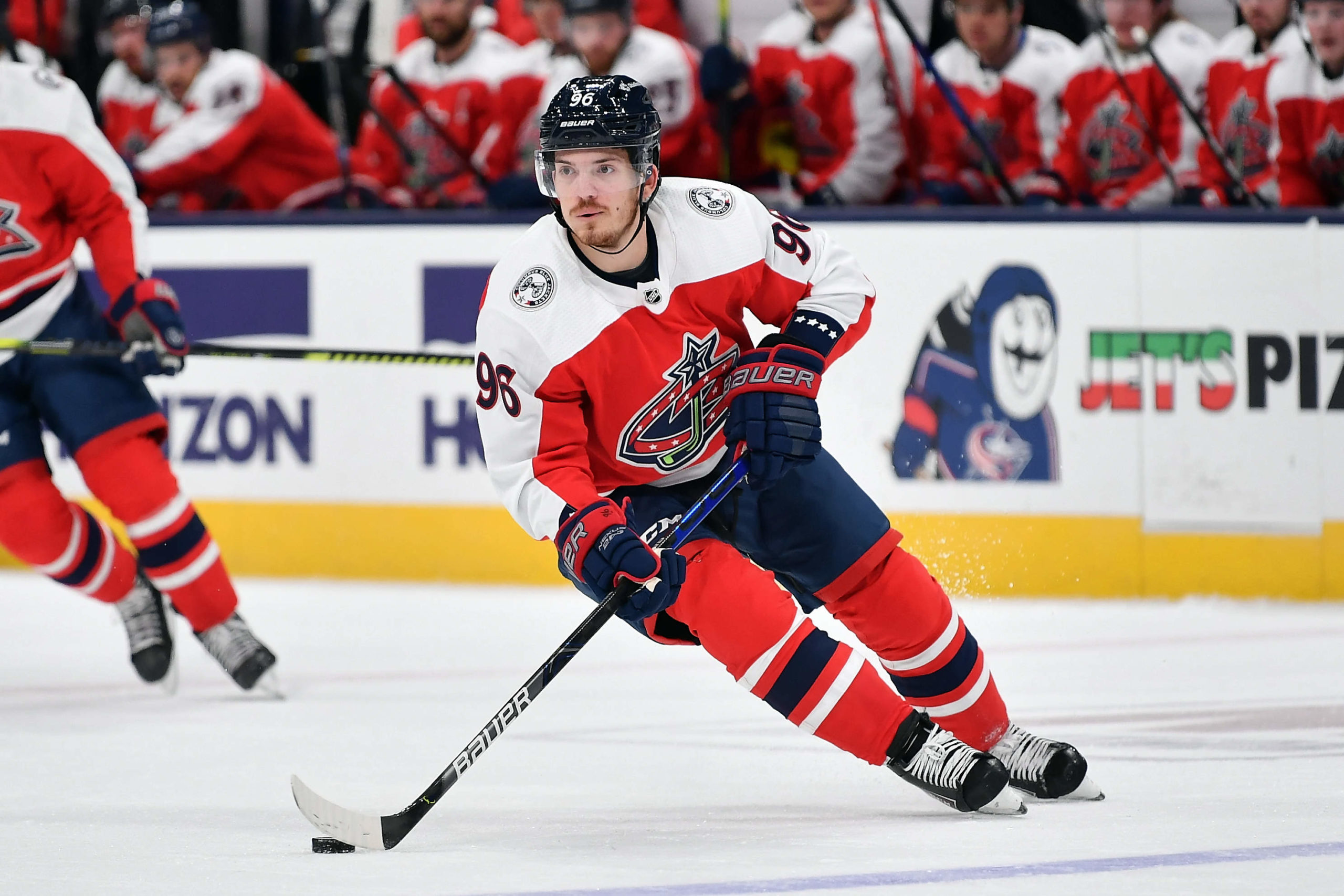 While no Columbus Blue Jackets are in the running for any of the on-ice performance-based awards, there are a couple where the team has some skin in the game. One is the Bill Masterton Trophy, which Justin Danforth was given the team’s nomination after a long and unconventional path to the NHL. The other is the King Clancy Memorial Trophy.

The award is given to “the player who best exemplifies leadership qualities on and off the ice, and who has made a noteworthy humanitarian contribution to his community.” This year’s nominee from the Blue Jackets was one Jack Roslovic.

It’s amazing how half of a season can completely change the outlook of a player. Columbus native Jack Roslovic did not have the hottest start to his first full season with his hometown Blue Jackets. After a strong performance within the rigid confines of former head coach John Tortorella’s system the season prior, Roslovic seemed to have a hard time adjusting to a more laissez-faire approach from new bench boss Brad Larsen.

Through the first 40 games of the season, 16 points from Roslovic seemed like a massive step back from the 34 he scored through 48 games in the Tortorella system. His ice time diminished, as he often found himself in a fourth-line role, playing less than 10 minutes per game. His season-low of 5:48 against the Blackhawks on Feb. 17.

Then some injuries started to hit the lineup. Opportunities opened up, and Roslovic seized it. He steadily gained more ice time and trust from Larsen. By the time team captain and first line centre Boone Jenner was knocked out for the season with a back injury, he had earned enough clout to become the de facto top pivot.

He was incendiary in the final month of play, netting 10 goals and 13 points through the last 10 games of the regular season. During that span, he averaged 20:24 in ice time and potted his first ever 20-goal season, ending with 22. He proved that he can be the dangerous centre that was hoped for when he was brought in from the Winnipeg Jets – the next steps will be consistency over a full year.

Let’s be real, Roslovic loves Columbus. Born and raised there, he is an advocate for the city. When he was traded home, Patrik Laine, who he was dealt with, is reported as saying, “if you listen to Jack Roslovic, Columbus is the greatest city in the world.”

“I grew up here, I spent pretty much my whole life here, so I have nothing bad to say about this city. I tell everyone it’s definitely underrated. This city has developed so much from when I first was born and what I first remember from it. I’ve had season tickets since the day they started in 2000 and I’ve watched the team grow and I’ve watched the city grow and I think that it’s not even close to its potential and I’m super excited to be a part of it. Anybody who wants to tell me differently I’ll be more than happy to try and persuade them the other way.”

It’s not only his love for the city, but what he does with that energy. He has given back in a multitude of ways. Starting by being a beacon and ambassador in paying it forward to the Blue Jackets youth AAA teams that he used to play for. Even before he became a Jacket, he started forming those relationships. As a mentor he led practices and most importantly showed young players that with a little hard work they can make their dreams come true.

“When we had guys out there with us, Cam [Atkinson] was super supportive of me, and he would always call me whenever I needed anything or I’d call him whenever I needed anything, when I was young,” Roslovic said of that relationship. “That’s the way I want to be to these kids and it’s special when you got guys who do that and reach out and genuinely care. I know how important it is and I know how far it goes in these kids books.”

To further that relationship, he started Rosie’s Gear for Goals in 2020. Its mission is to “make sure that anyone with dreams like [Roslovic] in Ohio have the same opportunities. The goal is to make sure that someone’s financial situation is not a limiting factor for kids in Ohio who want to play hockey.” They’re credited with providing $70,000 in hockey equipment and hockey scholarships for youth in the Columbus area.

Other feathers in his cap are working with a plethora of non-profits and Nationwide Children’s Hospital among others. He has been a standout in the community, which resulted in him being given the Columbus Blue Jackets Foundation Community MVP Award for this season.

Even though there was trade talk about him earlier in the year, don’t expect Roslovic to be moved in the off-season unless it’s under some sort of extraordinary circumstance. Roslovic is getting better year over year since he cracked into the league in 2017. Every time he’s scored personal bests in goals, assists, and points.

While things may be a little precarious in being without a contract through this summer, remember he still remains under team control with restricted free agent status. Negotiations between the two sides will be key to watch as the offseason drags on. For those rooting for a relationship to remain strong between Roslovic and the Blue Jackets, you would hope that a deal is done quickly and without the hassle of the arbitration process, which he has a right to. You don’t have to go too far back to remember when an RFA negotiation derailed the Blue Jackets’ relationship with a player.

This King Clancy Award nomination is another point in his favour. The thing that general manager Jarmo Kekalainen has always said about new acquisitions to his squad is that they need to be high character players. Roslovic’s bounce-back year, his work in the community, and potential to continue to grow, show him as having great character and make him an asset worth keeping.

Writer covering the Columbus Blue Jackets for THW since August 2021.

Also, a radio personality and reporter currently based on Vancouver Island.