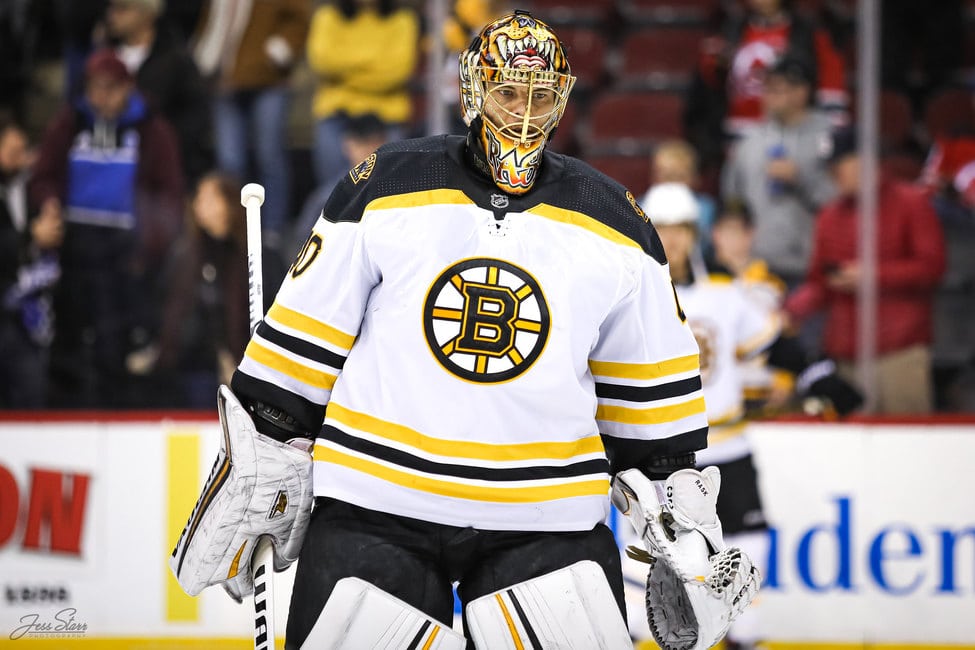 The Boston Bruins have a rich history in the world of hockey as an Original Six franchise, but their history of goaltenders has not always been so strong.

In the 97-year history of Bruins’ hockey, 110 goaltenders have donned a Bruins uniform and played to varying degrees in Boston. Some of these goalies have proven to be among the best in history while others have failed to stand out for better or for worse.

While the latter may not be very interesting, the former is certainly something that will always be a relevant topic of discussion. For this reason, it makes sense to take a look through history and determine which Bruins netminders are the very best.

For a goalie to be eligible for this list, they had to play at least 100 games for the Bruins and all the statistics mentioned come from the player’s time with the Bruins.

Coming in at No. 3 on the all-time Bruins goaltending list is the man who guarded the pipes from 1938 to 1949, Frank Brimsek.

Though Brimsek would debut under less-than-ideal circumstances for the Bruins in relief of an injured Cecil Thompson, at t start of the 1938-39 season, he’d prove his value to the team from the very beginning of his tenure in Boston. Though he wasn’t supposed to be a permanent fixture in net, he’d play so well that he’d retain the starting job for the entire season.

The decision to roll with Brimsek proved to be a good one as he went on to collect the Vezina Trophy, Calder Award and Stanley Cup in his rookie campaign. Brimsek played nine total seasons with the Bruins, racking up two Stanley Cup Championships (1939 and 1941) and two Vezina trophies along the way.

He wouldn’t just be celebrated with physical accolades, however, as he’d lead the NHL in wins and shutouts twice and was consistently one of the best goaltenders in the league during his career. Brimsek’s 230 wins place him third all-time in franchise history, and his 35 shutouts rank third.

When the United States joined the European effort in World War II, Brimsek left the Bruins to enter the United States Coast Guard for two years. He was enshrined in the Hockey Hall of Fame as part of the class of 1966, becoming the first American-born goaltender to be elected to the Hall of Fame.

If the Bruins play for another 100 seasons, it would still be a safe bet to assume that there will not be a more polarizing netminder in team history than Tuukka Rask.

Though Rask has his fair share of love from the fanbase and media, he’s also received seemingly equal amounts of hate and disrespect at the same time. Despite this, Rask has continued to play excellent hockey for the Bruins and is considered by many to be one of the best goalies in the NHL.

Tim Thomas would earn the starting job back for the next few seasons before Rask regained the distinction and hasn’t lost it ever since.

Rask is also a Vezina Trophy-winner in his career and is a Stanley Cup Champion, though he’d earn that ring while playing backup to Thomas in what proved to be a historic goaltending run. Rask also won the Jennings Award alongside Jaroslav Halak for their excellent 2019-20 season sharing the crease in Boston.

Whether you love him or you hate him, Rask will always be among the best goaltenders in the history of the Bruins.

It’s hard to evaluate and compare talent across generations. For this reason, it’s hard to truly appreciate some of the earliest goaltenders in Bruins’ history the way they probably deserve to be appreciated. Still, when looking at Cecil “Tiny” Thompson’s resume, it would be impossible to not have him listed at the very top of this list.

Thompson would own the crease in Boston for 11 total seasons between 1929 and 1939 with 10 of them being complete seasons. When looking at the statistics, it shouldn’t take long to realize Thompson owns the Bruins’ record book and likely will throughout history.

He ranks No. 2 in wins (252) and games played (468) and No. 1 in shutouts (74). That isn’t a mistake or a misprint, he did in fact record 74 shutouts during his time in Boston and 81 in his NHL career with seven coming during his time with the Detroit Red Wings. That’s a number that simply doesn’t seem touchable in a modern setting and a lot of that has to do with the fact that he would play in all but five games for the Bruins from the 1928-29 to 1937-38 season with all five of those games coming in the 1931-32 season.

Across his 11 seasons in a Bruins’ uniform, he led the NHL in wins five times and shutouts four times. For his efforts, he received the Vezina Trophy on four occasions. Although he only won the Stanley Cup once (1929), it was the first championship victory for the franchise.

Adding to his legacy, he’d revolutionize making saves as he was one of the first goalies to perfect catching the puck as a means for making a stop. He was also the first-ever goalie to record an assist in a game and regularly handled the puck, which was a new concept at the time. In 1959 he was enshrined in the Hockey Hall of Fame.

One of the most notable names in Bruins’ history regardless of position, Gerry Cheevers comes in at No. 3 on the all-time Bruins goaltending list. He’d spend 10 seasons with the team between 1966 and 1980, leaving to play in the WHA for nearly four seasons in between.

For many, Cheevers will be the first goaltender that comes to mind when discussing the Bruins. He was a part of some of the best seasons in Bruins history, including two Stanley Cup-winning seasons in 1970 and 1972, and that alone will always keep him enshrined as one of the very best in the eyes of fans.

Though Cheevers was never named the Vezina Trophy winner, that didn’t mean he wasn’t one of the best at his position throughout his career. He was frequently found in the top-10 in wins, shutouts, and goals against average. Within the Bruins organization, he ranks fourth in wins and sixth in shutouts.

In 1985, Cheevers was inducted into the Hockey Hall of Fame.

Though Thomas may forever hold a place in the hearts of Bruins’ fans, there’s no denying the nerves that the entire fanbase would feel every time he’d make even the most routine saves.

Thomas’ style was unorthodox at best, but it did the trick in making him one of the NHL’s best goalies during his time with the Bruins. He’d win two Vezina trophies, a Conn Smythe and the Stanley Cup during his time in Boston and will always be remembered as one of the greats.

* originally written in March of 2017

Chicago is Calder City again
Is this just the start of an Avalanche dynasty?
How Nathan MacKinnon molded the Avalanche into Stanley Cup champions
Lifting the Stanley Cup was ‘everything I dreamed of and more,’ says Alex Newhook
Avalanche visit the Lightning with 3-2 series lead