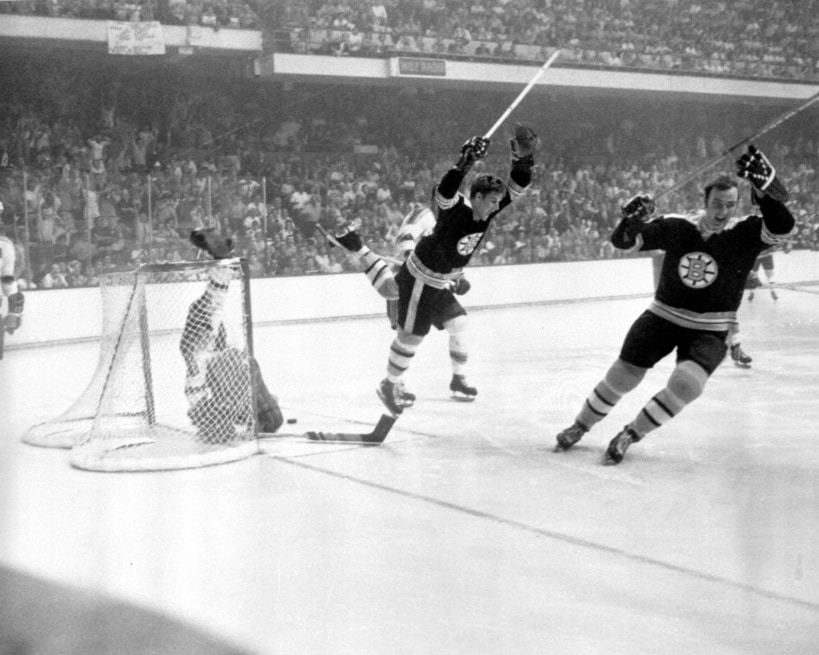 The most famous goal in National Hockey League history was scored on this date. In addition, memories were made during dynastic runs in Montreal and New York while numerous teams got one step closer to hockey’s ultimate prize. The THW time machine is fueled up and ready to take back through the years so we can relive all the great moments May 10 has given us.

Orr has always enjoyed May 10. Whether he was collecting hardware or scoring iconic goals, he made plenty of history on this date.

May 10, 1968, Orr was named winner of the Norris Trophy for being voted the NHL’s top defenseman. This was his first Norris win, and he went on to win every single one between this date and 1975. His eight-straight Norris Trophy wins are still the NHL record. The closest anyone ever came to repeating this was when Nicklas Lidstrom of the Detroit Red Wings won it six out of seven years, between 2001 and 2008.

Orr scored one of the most famous goals in league history on May 10, 1970. Just 40 seconds into overtime of Game 4 of the Stanley Cup Final, Orr took a feed from Derek Sanderson and scored the game-winning goal before flying through the air.

The goal, Orr’s first of the series, gave the Bruins a 4-3 victory and completed the four-game sweep of the St. Louis Blues. The Bruins celebrated their first Stanley Cup win since 1941.

Yvan Cournoyer was the hero on May 10, 1973, as the Canadiens won the Stanley Cup with a 6-4 victory at the Chicago Blackhawks in Game 6 of the Final. He broke a 4-4 tie eight minutes into the third period before Marc Tardif added an insurance goal. The Blackhawks had a two-goal lead in the opening period and got a hat trick from Pit Martin, but it was not enough to save their season.

On May 10, 1977, goaltender Ken Dryden recorded his fourth shutout of the 1977 playoffs and the eighth of his playoff career, as the Canadiens won 3-0 over the Bruins in Game 2 of the Stanley Cup Final. Steve Shutt scored two of the three Canadiens’ goals.

Two years later, the Canadiens made a late-game comeback to beat the Bruins in Game 7 of the Stanley Cup Semifinals. Boston built up a 3-1 heading into the third period, thanks to two goals from Wayne Cashman. The Canadiens tied the game with a pair of goals from Mark Napier and Guy Lapointe, about two minutes apart. Rick Middleton’s second goal of the game gave the Bruins a 4-3 with four minutes to play.

Guy Lafleur forced extra time while on a power play, with just 1:14 left in regulation. Yvon Lambert ended the series midway through the overtime period as the Canadiens moved on to the Stanley Cup Final, where they beat the New York Rangers in five games.

Ups and Downs for the New York Islanders

The first half of the 1980s were dominated by the Islanders as they won four straight Stanley Cups and making it to a fifth straight Final before their dynasty ended. They advanced to their first Stanley Cup Final on May 10, 1980, by beating the Buffalo Sabres 5-2 in Game 6 of the Semifinals. The Islanders erased an early 2-0 deficit to score the final five goals of the game. Bob Bourne had a shorthanded goal and two assists in the win.

On May 10, 1983, Islanders’ goaltender Billy Smith recorded his fifth and final career playoff shutout as the Islanders won 2-0 at the Edmonton Oilers in Game 1 of the Stanley Cup Final. Smith made 35 saves as Duane Sutter and Ken Morrow scored for the Islanders.

A year later, the Oilers got some revenge as they beat the Islanders 1-0 in Game 1 of the 1984 Stanley Cup Final. Grant Fuhr made 34 saves to earn the first of his six career postseason shutouts. Kevin McClelland’s early-third period goal was the only tally on the night.

On May 10, 1989, Joe Nieuwendyk scored twice as the Calgary Flames beat the Blackhawks 3-1 in Game 5 of the Campbell Conference Final. The Flames won the series and advanced to the Stanley Cup Final versus the Canadiens.

Two years later, the Minnesota North Stars beat the Oilers 3-2 to knock the defending Stanley Cup Champions out of the playoffs in Game 5 of the Campbell Conference Final. The North Stars advanced to the Stanley Cup Final for the second time in team history, where they took on the Pittsburgh Penguins.

Darius Kasparaitis became the first Penguins defenseman in franchise history to score an overtime playoff goal on May 10, 2001. He beat Dominik Hasek for his first goal of the postseason to give the Penguins a 3-2 win in Game 7 of the Eastern Conference Semifinals.

The Penguins closed out another playoff series in overtime on May 10, 2016. After coughing up a 3-0 second-period lead to the Washington Capitals, Nick Bonino scored in overtime to win Game 6 of their second-round series.

On May 10, 2018, the Winnipeg Jets advanced to the Western Conference Final after a 5-1 Game 7 victory against the Nashville Predators. Mark Scheifele scored two goals to set an NHL record with seven road goals in the series. This was the first time the franchise won two playoff series in the same season since the Atlanta Thrashers joined the league in 1999.

Red Wings defenseman Red Kelly became the first-ever winner of the Norris Trophy on May 10, 1954. It was the Hall of Famer’s only Norris Trophy win of his career.

On May 10, 1987, Pelle Eklund scored his first and only postseason hat trick in the Philadelphia Flyers’ 6-3 victory at the Canadiens in Game 4 of the Wales Conference Championship. The Flyers went on to win the series in six games and advanced to the Stanley Cup Final against the Oilers.

The Blues beat the visiting Red Wings 1-0, on May 10, 1996, in Game 4 of the Western Conference Semifinals. Goaltender Jon Casey recorded the third and final shutout of his playoff career as Wayne Gretzky’s first postseason goal with the Blues was the only offense needed.

On May 10, 2003, Patrick Lalime made history when he gave up two goals or fewer for the 11th straight playoff game. The record-setting performance came in a 3-2 victory over the New Jersey Devils in Game 1 of the Eastern Conference Final.

Later that evening, the Anaheim Ducks scored a double-overtime 1-0 win versus the Minnesota Wild in Game 1 of the Western Conference Final. Jean-Sebastien Giguere made 39 saves for his second career shutout, and Petr Sykora scored the lone goal of the night.

On May 10, 2010, Brian Boucher and Michael Leighton became just the second pair of goaltenders in league history to combine for a playoff shutout. Boucher stopped all nine shots he faced before a leg injury forced him to leave the game. Leighton came on in relief and made 14 saves in the Flyers’ 4-0 win over the Bruins in Game 5 of the Eastern Conference Final. Jacques Plante and Charlie Hodge of the Canadiens were the last goaltending duo to combine for a postseason shutout in 1955.

One year later, the Red Wings score three goals in the final 10 minutes of the third period in their 3-1 win over the San Jose Sharks in Game 6 of the Western Conference Semifinals. They forced a Game 7 after trailing in the third period of both Games 5 and 6, becoming the first team to accomplish this feat.

After just three career regular-season starts, John Gibson made his Stanley Cup playoff debut on May 10, 2014.  He stopped all 28 shots he faced in the Ducks’ 2-0 win at the Los Angeles Kings in Game 4 of their second-round series. He became just the sixth goaltender in the past 60 years to have a shutout in his first playoff start.

Connor McDavid hit another milestone in his already legendary career when he recorded his 11th game-winning goal of the season on May 10, 2021, against the Canadiens. Only Jari Kurri (13 in 1984-85) and Wayne Gretzky (12 in 1981-82) had more in a season in Oilers history.

With the second assist on Alex Wennberg’s goal on May 10, 2021, against the Lightning, Panthers defenseman Keith Yandle became the 10th United States-born blueliner to reach 600 points in the NHL.

On that same night, Blackhawks forward Alex DeBrincat became the first player to score a goal in each of his team’s final seven regular-season games since John Anderson of the Maple Leafs did it in 1984-85 when he scored in the Blackhawks 5-4 overtime loss to the Stars.

Cup Final, Gm4: Avalanche @ Lightning 6/22 | NHL Playoffs 2022
Penguins’ Malkin and Letang Are Too Valuable To Give Up
Flyers Free Agent Predictions for 2022 Offseason
NHL Power Rankings, way-too-early edition: The first look at 2022-23
Who wins Game 6 of the Stanley Cup Final? Paths to victory for Avs, Lightning