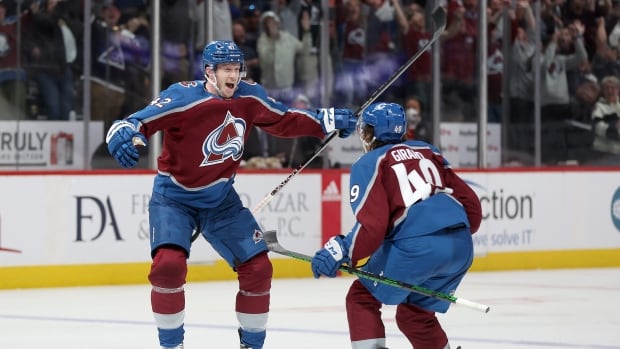 Josh Manson scored 8:02 into overtime, Darcy Kuemper made 23 saves in his return to the net from an eye injury, and the Colorado Avalanche overcame a sluggish start to beat the St. Louis Blues 3-2 on Tuesday night in Game 1 of their second-round series in Denver.

Manson sent a shot from near the blue line through a sea of players that went in just over the shoulder of Jordan Binnington.

Valeri Nichushkin and Samuel Girard also scored for an Avalanche team that had a week long layoff after sweeping Nashville. It showed early on, too, before they found their stride. They outshot the Blues by a 54-25 margin, including 13-0 in OT. The Avalanche also hit three posts and two crossbars.

Ryan O’Reilly had a first-period goal and Jordan Kyrou tied it late for St. Louis. Binnington kept the Blues close with one sprawling save after another. He stopped 51 shots.

Kuemper suffered a scary eye mishap in Game 3 of the Predators series when a stick blade went through his mask and caught him around his eyelid. It took a few days for the swelling to subside.

Girard staked Colorado a 2-1 lead midway through the second period on a shot that went through Binnington’s pads. Defenceman Erik Johnson nearly had another moments earlier with a wide-open net, but couldn’t get anything on his shot. Binnington reached out with his glove while on the ground to stop the rolling puck.

O’Reilly took advantage of a Cale Makar turnover to score early in the first period. O’Reilly has a goal in five straight playoff games, matching the longest playoff goal streak in Blues history. He tied the mark held by Phil Roberto (1972) and Joe Mullen (1982), according to NHL Stats.

The Avalanche didn’t look sharp in the opening 20 minutes. Artturi Lehkonen hit the post, while Nazem Kadri and Mikko Rantanen had shots clang off the crossbar.

“Everybody wants to make that into a thing,” Landeskog said. “Having that rest in the bank will be good.”

Nikita Kucherov and Corey Perry each had a goal and an assist, and Ross Colton also scored for the two-time defending Stanley Cup champions, who went ahead 1-0 against their in-state rivals for the second consecutive season.

Time and again, Vasilevskiy slammed the door on Florida. Over his last three games — all of them wins, including Game 7 at Toronto on Sunday — he’s stopped 94 of 99 shots.

Anthony Duclair had the goal for Presidents’ Trophy-winning Florida, which got 32 saves from Sergei Bobrovsky. Including the qualifying round that was held when the NHL restarted during the pandemic in 2020, Florida has lost seven consecutive Game 1s — a streak that goes back to 1997.

Duclair, a 31-goal scorer, was scratched by Florida for its series-clinching win at Washington, but he was back Tuesday and gave his team the lead by scoring on a pass from Jonathan Huberdeau at 14:01 of the first.

Duclair’s goal came after the Panthers killed off a pair of early penalties — one from MacKenzie Weegar and the other from Duclair — as special teams became a factor in the game.

Florida went 0-of-18 on the power play in the series win against the Capitals and was scoreless on three more tries Tuesday. But Tampa Bay cashed in three of its six chances.

After Kucherov was hooked by Weegar, he went right around Aaron Ekblad and fed Perry for a tap-in goal at 16:22 of the second period.

Bellemare’s goal came 3:35 into the third period, giving Tampa Bay its first lead of the game — and the Lightning kept it the rest of the way. The Lightning won a faceoff in the Florida zone and Perry took a quick shot from the slot that Bobrovsky stopped, but the rebound squirted right to Bellemare.

He beat Bobrovsky to the glove side for a 2-1 lead.

It appeared, for a moment, Florida ended its long power play drought and tied the score when Duclair scored on a loose puck. Tampa Bay challenged, saying the puck went off the netting and was therefore out of play. Video review confirmed that and the Lightning continued to lead 2-1.

That was the last hurrah for Florida. Tampa Bay left no doubt late, with Kucherov and Colton each getting power-play tallies in the final 4:06 to put the game away.